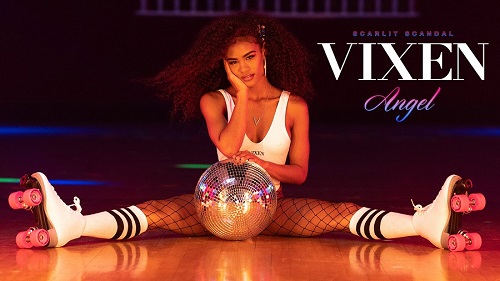 (Los Angeles CA / October 29, 2020) — World-famous erotica brand VIXEN Media Group (VMG) proudly presents Scarlit Scandal as its newest VIXEN Angel.
The star-on-the-rise was named Tuesday night on Vixen’s official Instagram page, where she celebrated her crowning achievement with  2020 and 2019 Angels of the Year – Ariana Marie and Teanna Trump as well as Vixen Angels Emily Willis and Vicki Chase.
“Ever since I first joined the industry, it was a dream of mine to be a Vixen Angel – and the time has come!” said Scandal of the honor. “All I can say is, this is only the beginning… and that ‘V’ is gonna look damn good sitting pretty on my chest!”
Scandal, who can currently be seen in Deeper.com’s hit new series Muse, will also appear in a scorching-hot BGG scene for VIXEN next month with reigning Angel of the Year Ariana Marie and Manuel Ferrara.
“While Scarlit is an undeniably talented artist, she is also a bright light and a spark of positive energy who is a joy to be around, on set and off,”  Said Mike Moz, Casting Director for the company. “She is an amazing addition to the VIXEN Angel family and we look forward to bringing more of her incredible onscreen work to fans.”
To learn more about Vixen Media Group, visit VixenGroup.com and follow on Twitter (@VIXEN) and Instagram (@vixenxofficial).
ABOUT VIXEN:
VIXEN is a true leader in the modern age of adult entertainment, the epitome of high-class erotica lensed with an artist’s eye that seeks to innovate the industry with a focus on beauty, class and sophistication.
Founded in 2016, VIXEN seeks to raise the bar with its videos, gorgeous fantasy vignettes that feature compelling plots set in sumptuous, modern locations that stimulate viewers’ sense of imagination and innermost desires.
VMG’s latest accolade includes the 2020 XBiz Global Studio Brand of the Year award.