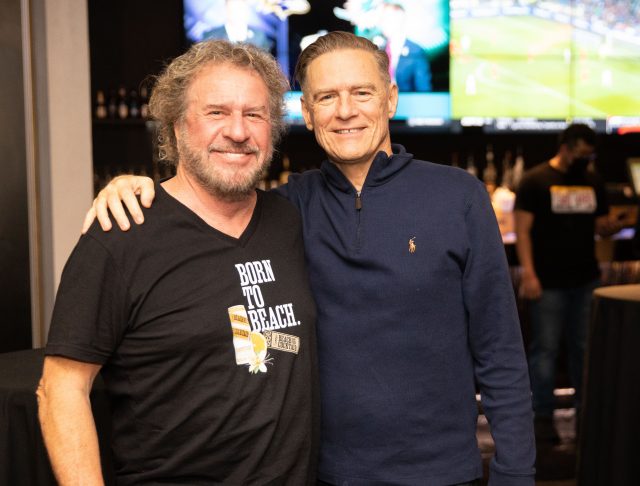 Last night, Rock & Roll Hall of Famer Sammy Hagar celebrated the final 2021 show of his new “Sammy Hagar & Friends” residency at The STRAT Hotel, Casino & SkyPod with an after-party at Cabo Wabo Cantina inside Miracle Shops at Planet Hollywood. Hagar was joined by members of his bands, The Circle and The Wabos, as well as longtime friend and iconic rocker, Bryan Adams.

This is the first Las Vegas residency for Hagar and all six shows for 2021 sold out in under two hours. The show’s run brought legendary guest performers to the stage including Bob Weir, founding member of the legendary jam band, Grateful Dead, Grammy winner and Hagar’s partner in Beach Bar Rum, Rick Springfield; and Stephen Pearcy, the lead singer of Ratt. Over the course of the three weekends Hagar played with Rock & Roll Hall of Famer and long-time Van Halen bassist, Michael Anthony, guitarist, Vic Johnson, and drummer, Jason Bonham, his bandmates from rock supergroup, The Circle; as well as bassist and vocalist, Mona Gnader, and drummer, David Lauser, his bandmates from The Wabos.

Adams joined the party following the first weekend of his popular show at the Encore Theater inside Wynn Las Vegas. The two friends reminisced about how Adams, who is also a renowned photographer, shot members of Hagar’s Chickenfoot for the cover of their 2009 self-titled debut album, which earned certified gold status later that year. The group enjoyed drinks made with Hagar’s award-winning spirits portfolio including Santo Tequila, Beach Bar Rum and his new canned sparkling rum cocktails, the first beverages in the Sammy’s Beach Bar Cocktail Co. line. They also enjoyed a decadent late-night taco bar along with the cantina’s signature guacamole and salsas.

Las Vegas is a special place for Hagar, who brought Cabo Wabo Cantina to the Strip in 2009. The cantina remains one of the most popular dining destinations in Las Vegas. Sammy & Friends will return to The STRAT in 2022 with new show dates, coming soon.