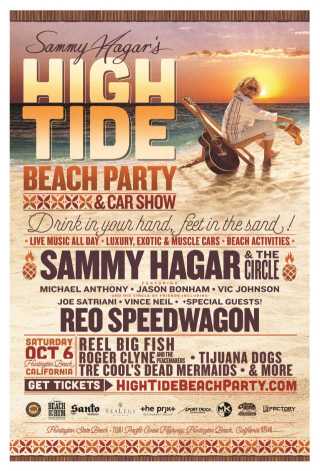 FOLLOWING A FIRST YEAR SELL-OUT, THE PARTY HAS BEEN EXPANDED TO TWO DAYS — SEPTEMBER 28 AND 29

Tickets On-sale May 16 at HighTideBeachParty.com

“Few musicians can throw a party quite like Sammy Hagar. Hagar and the Circle rocked.”  – The Orange County Register

HUNTINGTON BEACH, Calif. – Rock legend Sammy Hagar confirmed the initial lineup and details of his second “High Tide Beach Party & Car Show” on the shores of the Pacific Ocean in Huntington Beach, California. Due to incredible demand for tickets to his inaugural party in 2018 which sold-out in advance, the High Tide Beach Party will return this year as a two-day party, September 28 & 29, with double the music, cars, food, drinks and more.

Sammy Hagar said, “Who’s ready to go back to the beach?”

“We knew we were onto something special when we started planning the High Tide Beach Party with Sammy Hagar last year,” said event producer John Oakes of Freeze Management. “But we were blown away when it sold-out in advance the first year. We learned a lot and this year we’re coming back to make the party bigger and better, aimed at enhancing the attendees’ experience.”

Some of the automobiles shown will include Sammy Hagar’s personal Ferrari BB512i from his “I Can’t Drive 55” music video, Viciousstang – the twin-charged “Million Dollar Mustang,” as well as one of the legendary “General Lee” 1969 Dodge Chargers used in the original filming of the Dukes of Hazzard TV series, owned by Chrome Cars.

The Cabo Wabo grill will serve authentic handmade tacos, delivering big Mexican flavors north of the border. Bars will be located throughout the party with refreshing cocktail pairings including margaritas and specialty drinks featuring Santo Mezquila and Sammy’s Beach Bar Rum, as well as beer, wine and other refreshments. In true beach party fashion, fest-goers can enjoy the beautiful sand and sites at Huntington State Beach thanks to California State Parks.

About Sammy Hagar:
Sammy Hagar is a Grammy® winning vocalist, guitarist, songwriter, entrepreneur, #1 New York Times bestselling author and host of Rock & Roll Road Trip with Sammy Hagar on AXS TV, who’s sold more than 80 million albums during his four decade-long career. With his critically-acclaimed supergroup, The Circle, Hagar reunited with Michael Anthony, the renowned bassist who’s played with him for the past 30 years in bands including Van Halen and Chickenfoot; Jason Bonham, the acclaimed drummer and son of Led Zeppelin’s iconic drummer, John Bonham; and Vic Johnson, Hagar’s longtime guitar virtuoso who seamlessly shreds through his own, as well as some of rock’s most iconic guitarist’s riffs. The band takes fans on a musical journey through rock history with a set list spanning hits from Montrose, Sammy’s solo career, Van Halen and with Bonham on board, even a few Led Zeppelin classics.