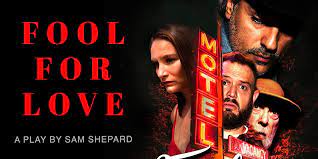 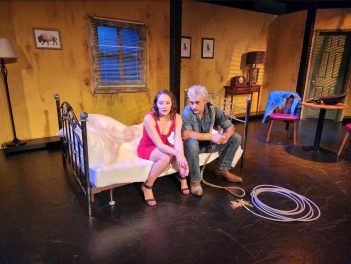 Hollywood, CA (The Hollywood Times) 11/7/22 – Friday night at the Hudson Theatre Backstage on Santa Monica Boulevard in Hollywood was the opening night of a new production of Sam Shepard’s classic play “Fool for Love,” which first premiered in 1983 at the Magic Theatre in San Francisco, where Shepard was the playwright-in-residence. The play was a finalist for the 1984 Pulitzer Prize for Drama. The following year, Robert Altman made a film version of “Fool for Love” starring Kim Basinger, Harry Dean Stanton, and Randy Quaid. The play focuses on May and Eddie, former lovers who have met again in a run-down motel in the Mojave Desert near Barstow. The “fools” in the play are battling lovers, Eddie (Vaz Andreas) and May (Kelsey Fordham). This new production of “Fool for Love” is directed by Michael W. Palmer and produced by filmmaker and actor Alain Azoulay. This is an opportunity to revisit one of Shepard’s most powerful plays that still have striking relevance to the way we see and often misunderstand human relationships that are shaped by forces beyond our control. The play at The Hudson Theatres is running November 4 through November 20 – Fridays and Saturdays at 8 pm and Sundays at 7 pm. For tickets, visit Eventbrite.com or Itsmyseat.com. 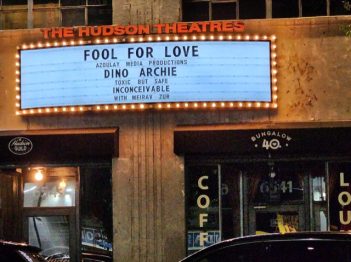 The play opens with May (Kelsey Fordham) staying at the motel when suddenly knocking on her motel room door is an old flame, Eddie (Vaz Andreas), a cowboy who seems unable to understand his own emotions. Eddie tries to convince May to come back to him and live in a trailer on a farm in Wyoming that Eddie has always wanted to buy and where he has always imagined living with May. May vehemently refuses. She says that she has absolutely no interest in living with Eddie under such circumstances, that she has a job and started a new life and knows that if she goes back to Eddie their relationship will repeat the same destructive cycle it has followed before. 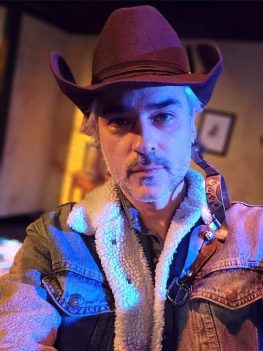 Lead actor Vaz Andreas explained to me that he has been reading the play for a while and “there was no other play that drew [him] in as much as this one.” He went on to add that he “liked the characters and their circumstances . . . a twisted situation but as an actor it’s really freeing because you can do unlimited things with Eddie and his behavior and view on life.” Vaz Andreas is an actor who started out doing live theatre and has appeared in TV shows like “NCIS,” “Lucifer,” “Chasing Life,” “The Shield,” and “Hit The Floor.” He has published his first novel called “Fade” and recently wrote, directed and acted in a short film “Dark Senses” – which has garnered awards at several recent film festivals. Kelsey Fordham is an actress who has appeared in several short films including “Entitled,” “This Land,” and “Halwa.”

The play centers around the drama of the confrontation rather than a plot with any rising and falling action. “Fool for Love” has been described by Nelson Pressley as a “vintage Sam Shepard desperation-at-the-edge-of-the-desert look” with a “twisted cowboy romance.” As with Sam Shepard plays, the words escalate into explosive action, the actors tearing at each other like mortal enemies. The landscape here is not so much the forlorn Mojave Desert motel room, but the emotions that contain states of mind inside the self. Shepard’s principal characters tend not only to be alienated from their immediate circumstances but also to be victimized by their drive toward a destructive self-isolation. 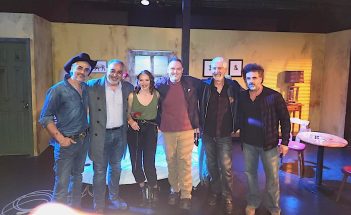 The center of Shepard’s work moves steadily toward a distinctly American version of the domestic drama defined by his predecessors Henrik Ibsen, Anton Chekhov, and Eugene O’Neill, but the conflicts between siblings, husbands and wives, or parents and children are consistently played out against the backdrop of the icons that created the American national identity during the Vietnam era: cowboys, rock and roll music, Hollywood films, middle-class suburbia, science fiction, and the West. It is Shepard’s consistent ability, however, to use the particular to suggest the universal that indicates his greatness.

The friction dramatized in Eddie and May’s emotional and sexual relationship points toward Shepard’s signature characterization of men and women as two opposite animals who cannot coexist. “Fool for Love” also examines how the same event is often shaped and reshaped by different individuals to create widely divergent memories and understandings of what happened. Eddie and May do not share the same recollection of their meeting and cannot come to terms with the implications of their relationship; moreover, none of their stories agrees with versions of the same incidents told by the Old Man (Mario DeGasperi), who at times seems to be Eddie’s and May’s mental projection but who at other times seems to be an independent character – who sits perched at the edge of the stage listening and observing.

Despite her attempt to establish a different lifestyle with Martin (Michael W. Palmer), the new man in her life, May is as inextricably bound to Eddie as he is to her. Even though Eddie leaves at the end of the play and May believes that he is not coming back, the play suggests that the audience has witnessed but one episode in a continually repeating cycle in which Eddie and May are victimized by their repetitive actions. The wake of devastation left by figures who are incapable of bridging the abysses they have created shapes the central conflict in many of Shepard’s plays.

The pulsating rhythms of those conflicts can be tracked through Shepard’s unique use of dramatic language. Instead of the series of natural exchanges between characters found in plays constructed on the principle of mimetic realism, the language in Shepard’s plays reflects his extensive musical background. The actors in this production of Shepard’s “Fool for Love” track this pattern of language in raw outbursts and physical intimation that capture the pull and push of sexual desire and the inability of the characters to completely comprehend what makes them driven to love and hate so intensely.