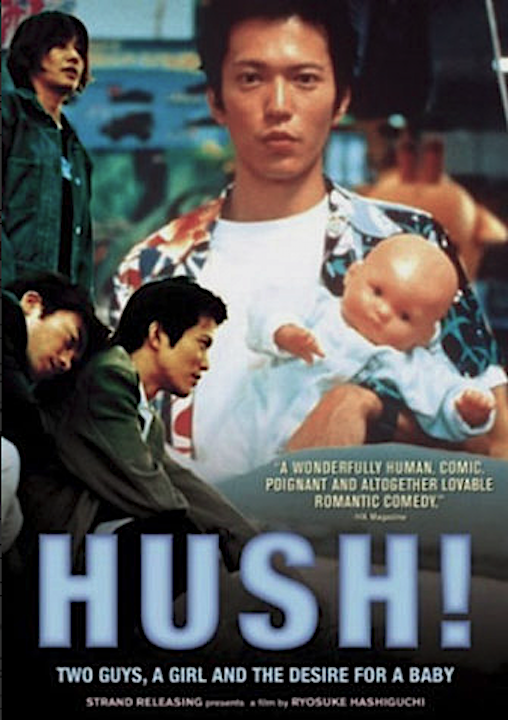 Los Angeles, CA (The Hollywood Times) 4/3/22 – Screening on April 2 at the UCLA Hammer Museum & Billy Wilder Theatre was Hush! (Japan, 2001), a film directed by Ryôsuke Hashiguchi. a Japanese film director particularly known for projects concerning LGBTQ community issues.  He won the award for Best Director at the 24th Yokohama Film Festival for Hush! and at the 33rd Hochi Film Award his later film All Around Us. This is not the same director as Ryûsuke Hamaguchi, who just won an Oscar for his Drive My Car! (2021). Being a director with interest in gay culture in Japan, Ryôsuke Hashiguchi directed 8mm-films while still at secondary school. In 1989 his short film A Secret Evening won the grand prix at the Pia Film Festival. In 1992 he made his first feature The Slight Fever of a 20-Year-Old, which was screened in Berlin and broke box-office records at one of the cinemas when it was screened in Japan. Although basically a comedy/soap opera, Hush! tries to use Ozu-like long shots which prolong many scenes in an attempt to perhaps give the film greater arthouse appeal. At any rate, Hush! is one of the more interesting films included in the Outfest UCLA Legacy Project Screening Series hosted by the Hammer Museum and was recently restored as a 35mm print in the Legacy Archive.

Gay life in Japan used to be entirely in the closet. Takehiro Nakajima’s Okoge (1992), for example, depicted formidable obstacles blocking acceptance of gay people. In contrast, Hush!, directed by Ryôsuke Hashiguchi portrays an open recognition of the legitimacy of gay life, though with twists and turns that are uniquely Japanese. When the story begins, we see Naoya (played by Kazuya Takahashi), who works in a pet shop, swearing as a sex partner leaves abruptly in the morning, a one-night stand rather than the beginning of a relationship that Naoya seeks. Naoya (Kazuya Takahashi), an out and proud dog groomer, makes coffee alone in his kitchen, listening. In the other room, Katsuhiro (Seiichi Tanabe), a reserved and private engineer, gets dressed. They’ve only just met and Naoya wonders intently: Will he or won’t he stay? When Naoya gets the answer he was hoping for, coffee overflows, loneliness recedes, and domestic bliss rushes in. It’s a quietly ecstatic moment grounded in an everydayness that exemplifies Hashiguchi’s style even as what leads from it grows increasingly complex.

Soon, however, Naoya is living with the love of his life, Katsuhiro (played by Seiichi Tanabe), who in turn has not had the courage to come out of the closet to spare a female coworker from the frustration of pursuing him. The more closeted, intellectual Katsuhiro beautifully complements the more openly gay, spontaneous Naoya, and they live together happily. Naoya and Katsuhiro have differences to negotiate but it’s after a brash, troubled young woman, Asako (Reiko Kataoka), barges into their lives that their new relationship is really tested. Desperately alone, Asako wants what she thinks Naoya and Katsuhiro have and so becomes obsessed with having a baby with Katsuhiro. If that sounds like a predictable setup for broad comedy and sentimental pronouncements, Hashiguchi surprises. He’s genuinely curious about exploring the possibilities and meaning of family within a still tradition-bound cultural context.

Dental technician Asako (played by Reiko Kataoka) has taken a fancy to research engineer Katsuhiro. We learn later that she had failed relationships with men, and abortions resulted, but now she proposes to carry Katsuhiro’s child. Her proposal, then, has both serious and comedic consequences. Naoya and Katsuhiro have what appears to be a lover’s spat over the idea, but ultimately they agree that any decision to accept her proposal must be acceptable to both lovers. Thereafter, the three interact socially and convivially, so a favorable decision seems likely. One day, however, Naoya’s mother (Katsumi Hase, played by Manami Fuji) barges into his apartment; unaware that her son is gay; she is desperate to have her son marry a woman.

Hush! shows somewhat greater ability or willingness to recognize that a son/brother might be gay (and the word itself is used and understood by the characters, replacing the pejorative labels found in earlier Japanese films). The mother of Naoya (Katsumi Hase) is convinced that her son Naoya will have his male genital equipment removed and have breast implants, as does the wife of Katsuhiro’s brother in thinking about Katsuhiro. However, Katsuhiro’s young niece, aged around ten, has a more matter-of-fact sense that gay men generally do not want to be women. Moreover, Katsuhiro’s brother (the girl’s father, Shoji, played by Mitsuishi Ken) is accepting and somewhat comfits Katsuhiro when he tells him that Katsuhiro’s sexual orientation is no surprise to him. (Katsuhiro is unpleasantly surprised that his orientation is obvious to several characters, after tentative attempts (at different times) to come out to two co-workers in a movie-set enterprise fail.)

Recalling Ang Lee’s The Wedding Banquet (1993) more than a little, Naoya first blows up when he learns of the proposition, but then becomes a pal of Asako, hanging out with her quite a bit. There is a very formal family visit that I find hilarious. On another occasion, Katsuhiro’s brother and his family arrive unexpectedly to stop Asako from having Katsuhiro’s child. Naoya, Katsuhiro, and Asako are all seemingly petrified as Katsuhiro’s brother-in-law and Naoya’s mother denounce Katsuhiro ­– not for his gay relationship but for being unfaithful to Naoya with two women. (Yoko has sent them a dossier on Asako’s disreputable past that included at least one suicide attempt and two abortions, and restating her view that Katsuhiro is engaged to marry Yoko.) Katsuhiro is again mortified.

The older women talk demeaningly to Asako, and emotions flare, something disapproved of in Japanese culture, and Asako leaves in a state of despondence. The following morning Naoya and Katsuhiro go to her apartment to make sure that she has not committed suicide, and the three are reunited. When the film ends, Asako has bought two long syringes for the semen of both lovers, saying that her first child will be from Katsuhiro, and her second child will be from Naoya. When credits roll, we see baby pictures of her offspring from the gay couple, but there are more than two.

A barebones plot summary, however, does not tell the full story. Many of the funniest scenes will be enjoyed more in Japan, while American audiences will be oblivious of much of the comedic content; for example, when Naoya’s mother comments favorably on how clean he keeps his toilet, Japanese film viewers will laugh uproariously, while Americans probably won’t see any humor. An effort to explain why the two men are gay is provided in the story, something perhaps more important for Japanese than for Americans. Thus, Naoya became gay because he his father died at an early age, so he picked Katsuhiro, a masculine gay man. Katsuhiro, on the other hand, had an alcoholic father who provided not much of a role model for successful heterosexuality, and he prefers a gentler man. But many people have absent or alcoholic fathers and do not become gay.

What is important about Hush! is the extent to which the two lovers accept each other so maturely that the way in which they solve problems together should be a model for heterosexuals. Indeed, the heterosexuals in the film seem so impressed with their relationship that they end up eager to provide support. A feel-good movie in the best sense, Hush! will produce a smile on the face of film viewers as they leave the cinema.