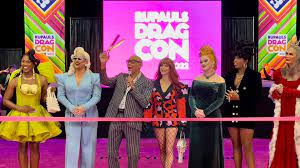 Start your engines! Today marked the kickoff of RuPaul’s DragCon LA 2022, presented by RuPaul and World of Wonder Productions, and marking the 10th ever convention of its kind with a full day of Friday programming.

RUPAUL said at this morning’s ribbon cutting: “The family is back together again, and we’re looking good too!”