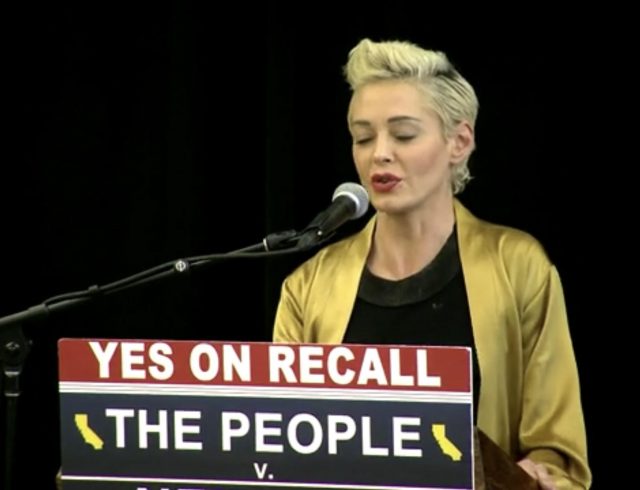 Los Angeles, CA (The Hollywood Times) 9/13/21 -As an Asian man reveling in the major strides we have made as a society to embrace Asian film and music, now fully mainstreamed with major box office numbers, I remember sharing my dream with my father before he passed in July 2018, right before Crazy Rich Asians became a blockbuster hit and films like Parasite were winning the academy’s top awards. And right before Harvey Weinstein was taken down by the #MeToo movement. 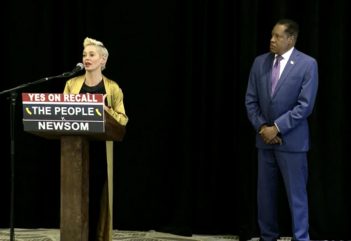 This growth in Hollywood’s range of stories would not have been possible if old structures had not been broken down that were intent on perpetuating the same old stories because “that’s just the way it is. It sells”. And this change is a big part due to the bravery of Rose McGowan who was intent on speaking her truth about the way Hollywood operated.

Today at the Luxe Hotel, supporting the recall and Larry Elder, while exposing the attempted bribery by Newsom’s wife before she went on trial against Weinstein, she demonstrated bravery again while not towing Hollywood’s political line.

“What would it take for you to stay quiet?” There’s no price, she responded.

This shocking revelation came at a time for maximum impact and Rose held no punches. What was actually most powerful in her speech was her empathy for the attacks Elder has experienced as a black man and while I don’t agree with her on everything, I admire her desire to be intellectually honest. Hollywood can be tribal. But Rose is an independent spirit.

Rose cited her support for the recall as the alternative would be better than the current occupant in the governor’s mansion, she stated, as Elder is a “better man”.

But what struck me was her closing statement. She touched upon race in a way that so few talk about. I certainly am not afraid to talk about it in my pieces but so many Blacks, Latinos, and Asians who have different points of view feel silenced because many times, we would rather not deal with the blowback or being called nasty names just because we may hold a conservative view or two.

Rose has taken her own suffering and channeled it into good and told the press and media to stop nasty attacks against Elder just because he’s black and his viewpoints are inconvenient. She called for balance and not instantly vilifying anyone with a conservative or Republican. She said “be human” and I teared up as I remember all the friendships and family lost because we got so partisan and stuck in our ways, dehumanizing others who didn’t think like us. Most of this was coming from the left but I also saw some on the right do the same.  Can we just agree to disagree and be friends?

Hollywood is slowly uplifting unique stories and perspectives. Rose is doing the same and thank you Rose for your bravery. You have given me more bravery to continue speaking my truth and my experience under this Asian skin, the way you asked people to respect Larry’s lived experience.

To be a person standing for truth and balanced viewpoints in Hollywood at the risk of your career is true bravery.  Again, to quote Rose at this conference: “Be human”. Make your choice on the recall. Don’t vilify others for even daring to question the current leadership.