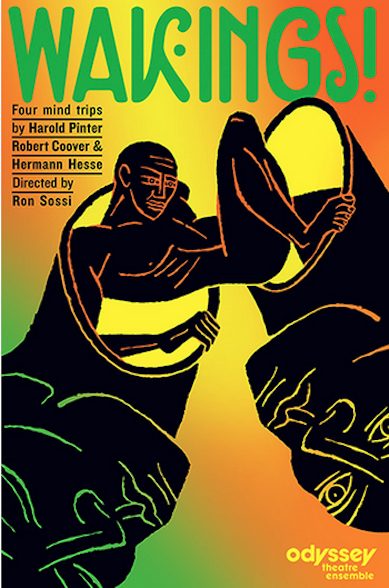 Los Angeles, CA (The Hollywood Times) 5/26/22 – Currently running at The Odyssey Theatre in Westwood is a set of one-act plays directed by Ron Sossi entitled Wakings! – produced in association with Isabel and Harvey Kibel. The gathering of four short plays under the rubric of “wakings” offers an inquiry into sleep, dreaming and waking – a subject of great interest to philosophers, psychologists, writers and artists. The mystery of what constitutes different states of consciousness and what triggers them is the subject of these plays – and wanders into consideration of what fantasy, hallucination, coma states, hypnosis, the “psychedelic experience” and the age-old quest for “spiritual awakening” represent. Ron Sossi has combined two short plays by British playwright Harold Pinter – Victoria Station (1982) and A Kind of Alaska (1982), with Robert Coover’s very literary redo of the Washington Irving’s tale of Rip Van Winkle as Rip Awake (1972) and an end-piece based on Herman Hesse’s Siddhartha (1922).

Lasting fewer than ten minutes, the play’s tone is mostly comic, as the Controller becomes more and more frantic at the Driver’s recalcitrance; however, as the play develops, the Controller’s orders become increasingly ominous threats: “Drop your passenger. Drop your passenger at his chosen destination and proceed to Victoria Station. Otherwise I’ll destroy you bone by bone. I’ll suck you in and blow you out in little bubbles. I’ll chew your stomach out with my own teeth. I’ll eat all the hair off your body. You’ll end up looking like a pipe cleaner? Get me?” But Driver 247 reveals that this client is a young female with whom he has “fallen in love” (possibly “for the first time”) and from whom he refuses to part, imagining that he will even marry her and that they will “die together in this car”, despite the previous admission that he is already married to a wife probably “asleep in bed” and the father of (perhaps) “a little daughter”—”Yes, I think that’s what she is.”

Next up is a 30-minute-long play Rip Awake, in which playwright Robert Coover came at the question from a very literary direction. How would it feel to be a man who just slept away 20 years of his life and awakens to find the world changed? Someone exactly like Washington Irving’s classic Rip Van Winkle (Darrell Larson), who must make sense of the absurdity of existence. Darrell Larson expands Washington Irving’s classic tale of Rip Van Winkle, a man who falls asleep in the Catskill Mountains of New York, after drinking some strange brew, and find himself, 30 years later waking to a world and himself totally changed.  This Rip Van Winkle is not entirely sure if he is awake or dreaming, as he questions the world in which he now finds himself. Robert Coover is an American writer of avant-garde fiction, plays, poetry and essays whose experimental forms and techniques mix reality and illusion, frequently creating otherworldly and surreal situations and effects. He is the author of twenty-some books of fiction and plays, his most recent being Noir and A Child Again. Robert Coover’s first novel, The Origin of the Brunists, won the 1966 William Faulkner Award.

After a short intermission with a change of sets, we return to Harold Pinter and his troubling play A Kind of Alaska (1982), a tale about “sleeping sickness” which seems to have infected the world in the earlier 20th Century. Influenced by neurologist Oliver Sacks’ Awakenings (later made into a movie by Robert Altman), this piece brings the story up-to-date. Deborah (Diana Cignoni) must come to terms with a nap which began when she was 16 years old – only to end at 45. Even Dr. Hornby (Ron Bottitta) and her sister Pauline (Kristina Ladegaard) can’t help her resolve her many unanswered questions. Why was she robbed of almost 30 years? Is she the only sane person in the room?

A middle-aged woman named Deborah, who has been in a comatose state for thirty years as a result of contracting “sleepy sickness,” encephalitis lethargica, awakes with a mind still that of a sixteen-year-old. She must confront a body which seems to have aged without her prior knowledge or consent. Her sister Pauline and Pauline’s husband, Hornby, who has been Deborah’s devoted doctor over these three decades and who may have fallen in love with her, attempt gently to ease her back to her current reality, while withholding some of the more jarring information. Deborah reawakens to a changed world, attempting to take what appear to her to be rather shocking revelations in graceful stride, but ends the play with the ironic observation about her sister and brother-in-law that can only go so far towards accepting the realities that they have allowed her to know.

In an interview with actor Ron Bottitta, he elaborated: “In one of the short plays, A Kind of Alaska, a woman wakes up from a 30-year coma with a mind that is still 16-years-old. It seems to me most people would prefer to inhabit their past 16-year-old self rather than deal with the truth about time moving on and changing their physical reality. As her doctor, do you see him as sympathetic to her plight or just a by-the- books medical professional who attempts to hide his emotions with patients in his care? Again, I don’t want to give the plot away, but the doctor has become emotionally attached to his patient over 30 years. And we don’t always get what we want.”

The set of one-acts play closes with a 12-minute piece taken from Herman Hesse’s Siddhartha, the 1922 novel by Hermann Hesse that deals with the spiritual journey of self-discovery of a man named Siddhartha during the time of the Gautama Buddha. Siddhartha (C.J. O’Toole) undergoes changes which create a new being, Buddha – a being who awakens from one reality to another as blindness gives way to sight. Siddhartha (later called the Buddha) escapes from his rich life as a prince in order to seek refuge with forest ascetics, but that too has been unsuccessful. He is about to give up, as our short excerpt begins. As explained by actor Ron Bottitta, “Ron’s love of the absurd is only eclipsed by his love of Buddhism. He knows whereof he speaks.” That sums up the experience of this grouping of plays, which seem very close to the heart of Ron Sossi’s favorite themes to capture on stage.