It’s back! The red carpet is back! Sort of. Almost. The reception for the new Amazon Prime series MY AMERICAN FAMILY did have real people dressed up in their sparkliest face masks gathered at Studio in Beverly Hills — a sort of WeWork-meets-Soho House space in the Maple Drive complex — eating Trejo’s tacos and smizing for the camera. But maintaining social distance between the talent and the photographers, plus bringing everyone in the ensemble cast out one by one, was more time consuming than the PR team at Jolson Creative ever expected, and the Q&A panel still had to take place over Zoom.

Even so, for the socially starved press — okay, me — it was heaven.

Local legend Danny Trejo (MACHETE, BREAKING BAD, THE MASKED SINGER) is the name above the title in this six-episode sitcom, but the star is 35-year-old creator/writer/producer Victor Migalchan. Migalchan is a globetrotting Ukrainian/Austrian/ Romanian business tycoon who speaks five languages, is an expert martial artist and holds multiple advanced degrees in international business relations. You’d think the kid had better things to do than write himself a sitcom. But, no, everyone wants to be in show biz.

“I was in Harbin, China, which is basically Siberia,” says Migalchan. “It was minus 40 celsius and I was just waiting for people to come pick me up, so I started writing this story about the experience of how I came to America.” 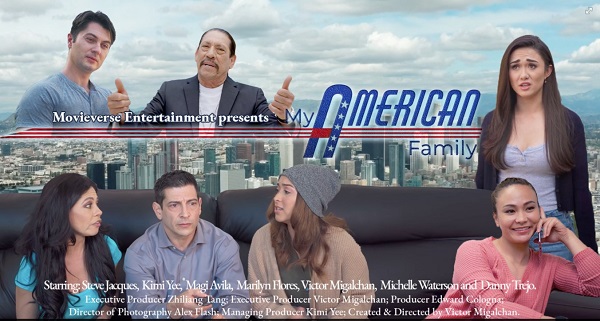 Migalchan’s version of himself is called Alex Ramonovych; his new family is the Martinez clan, headed by Magi Avila and Steve Jacques. They thought they were taking in a Chinese exchange student, but ended up with a six-and-a-half foot tall Russian pushing 30 who just happened to be at school in China. It’s an interesting premise, and maybe someday someone professional will tell it. For now, its main pleasures are listening to Avila speak Spanish faster than a tobacco auctioneer and watching the generally menacing Trejo, as Martinez’ boss at a car dealership, get to be silly.

That Migalchan actually got his series up on Amazon Prime with no studio backing, no Hollywood resume and no acting experience is a remarkable feat of perseverance and business acumen. “He knows people everywhere,” says Jacques. “He knows people in Ukraine and China and he’s a very savvy businessman.”

Am I crazy to think that the/re’s a behind-the-scenes tale here of /international intrigue and dark, dirty money that’s far more interesting than a sitcom about a guy who sells cars?

The Martinez family hosts a young martial artist who isn’t quite what they were expecting.