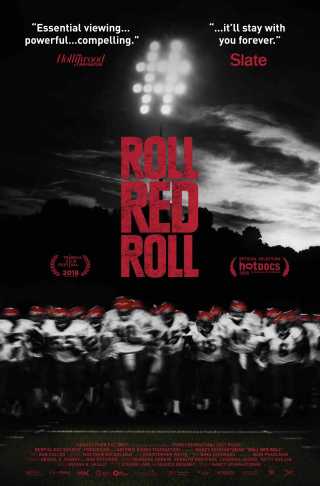 “…When a group of boys decide that ‘training’ an incapacitated girl is funny and worth posting all over social media, the result of their actions creates a firestorm of those who have remained, anonymous…”

Roll Red Roll is a true-crime thriller that goes behind the headlines to uncover the deep-seated and social media-fueled “boys will be boys” culture at the root of high school sexual assault in America.   In 2012, an incident in Steubenville Ohio involving a young woman and players of the high school football team captured the national media’s attention, shining the light on “rape culture” and the youth of America.
The film unflinchingly asks: “Why didn’t anyone stop it?”

At a pre-season party in small-town Steubenville, Ohio, a heinous crime took place: the assault of a teenage girl by members of the beloved high school football team. What transpired would garner national attention and result in the sentencing of two key offenders. But it was the disturbing social media evidence uncovered by crime blogger Alexandria Goddard that provoked the most powerful questions about the collusion of teen bystanders, teachers, parents and coaches to protect the assailants and discredit the victim. As it painstakingly reconstructs the night of the crime and its aftermath, Roll Red Roll uncovers the ingrained rape culture at the heart of the incident, acting as a cautionary tale about what can happen when teenage social media bullying runs rampant and adults look the other way.

An interview… Farrah, felt that Jane Doe would be “Safer with Us”… really seemed to care. But she allowed her to do what she wanted.  1st mistake!

Then the grounds for an arrest were made and Trent Mays and Ma’lik Richmond were arrested a week later for alleged rape.

Trent texts’ 3 times to Jane Doe… gets no response.

She feels there was more to the story… she felt that Steubenville was NOT a women friendly town to start out with.

Several end of summer parties, after Big Red’s game… everything was normal but then everything changed.  It was like a rotten onion and as you peel the layers back, there’s more rotting of the onion under it and so on and so on.

It’s amongst a student body, that has just gotten into school, that possibly a party that got out of hand. Things have changed over the last 40 years.  Most of the people said, “You should’ve seen the outfit she had on…” and talking smack about her.

DJ Bloomdaddy, speaking about this on the air… “sometimes the girls drink too much, get a little promiscuous, instead of owning up to what you did… it’s easier to say, ‘I was raped,’ then to say, ‘Mom, Dad, I got drunk and did some things I wasn’t supposed to’…”

Jane Doe just wasn’t raped, she was humiliated, publicly shamed… Then Alexandra started digging deeper…taking screenshots of everything for archival purposes. There was a complete lack of empathy. The kids were openly calling it rape. She finally decided to post what was out there and once posted, it was utter mayhem…it was crazy… but when people actually saw what happened, it caused a very visceral reaction…  Social media exploded…

Another local parent started monitoring what had happened. As a father, he was concerned.  They questioned how do you think (other parents) would feel? Would that would be ok.  A drunk, naked girl being dragged around like she was nothing… like a piece of trash.

A lot of people feel that Jane Doe was just as in the wrong as the boys because people claim she knew what she was getting into and well, she should’ve known…right?  The coaches said to have integrity, courage, dignity and take responsibility… be the man you’re supposed to be… but would they?

DJ Bloomdaddy started saying that Alex Goddard was a cyberbully for blogging what she found… he mentions, things need to be done in a “Fair and Balanced way“… hmm. We’ve heard that statement before on an “ENTERTAINMENT NETWORK” claiming to be a NEWS ORGANIZATION.  But I digress.  It was because of Alex that helped raise a lot of questions as to what was going on. However, one question remained:  Is this football town putting its girls at risk to protect the football players…

Coach Reno was interviewed and said that he “had to protect these guys…” Then when an investigative reporter inquired… she found that he was frustrated.  When the Superintendent Mike McEvy was interviewed, all he kept on stating was: “Our discipline protocols were in place…”  but were they? Did they even enforce them?

Coach Reno, further stated, during an interview with authorities, that he would defend them [Trent and Ma’lik] if they were right but suspend them if they were wrong.  The coach was trying to say to the police, “Hey, can’t we use another word for rape?”  The officer needed to put it another way, “If a person cannot say, “YES OR NO”, then, yes, that is rape…”

Social media’s role helped in the documentation for the authorities because they could piece together the time Jane Doe had no memory of a specific time of the events.  She was in three different places… A, B, and C.

You hoped for a hero, someone to step in… but no one… stepped up…

Alex Goddard, the crime blogger, didn’t think she was doing anything wrong… she felt it was her duty to repost… she was then sued for defamation in October of that year.  People spoke up on her blog because they wanted to speak out anonymously… but then after she was sued, she knew that the people of Steubenville, hated her guts.

She believed that her safety may be in jeopardy… she stopped blogging, since…

The NY TIMES found out and the headline reads:  Steubenville, OH – SPLITS!

Then the tweets changed… on DECEMBER 25th, Christmas 2012, the shit hit the fan. Anonymous hits the web… and they do not forgive, nor do they not forget… Wise not to shield the guilty!

The video Anonymous posted… is DISGUSTING! It’s making me SICK WATCHING IT… the Michael Nodionos video was published… and it was put in their face… A lot of people in Steubenville, had no idea what rape even was… Anonymous members appeared with the masks and that freaked people out… there was a spotlight on the town…

DJ Bloomdaddy just wanted the story to go away…go away? Are you serious?  WAKE UP AMERICA!

Women started speaking out… They started to be silent NO MORE and again, THE PRICE OF SILENCE… brings out the truth in town and boy oh boy they were speaking out… women were taking off the mask… afraid to go outside, had nobody, alone… until they could release that, the MASK CAME OFF!!!

There was a rally. It was not just a protest, but it was women, taking their masks off, a transformation. They were able to say it and release it. LET IT GO!

Protests started against the police for slow-walking the investigation… it grew on a GLOBAL SCALE!  The world began to know about Steubenville, OH.  This made people question the culture they were living in… EVERYONE has a voice… this was the voice for JANE DOE… she needs to be protected.

Alex questioned whether or not she was re-exploiting Jane Doe. Was she making her relive this because she wanted to do the right thing?

A typical case, you have the word of a victim alone, which is sufficient to prove a fact. but when the victim couldn’t remember, then the cell phones were the documentation, the proof needed.  The voice of the victim.  Thank you; social media and the kids wanting to post their every move, online! THANK YOU for being Jane Doe’s voice.

Mark Nodionos’ video was disgusting, but it was not a crime… The mountain of photos, the 400,000 text messages, proving penetration was nearly impossible… So, the prosecutor had to do the one thing she knew she had to do to prove her case.

Jane Doe thought she could trust him, and Trent played on that.  He used her like a toy. There is more to this story and if you believe that when the trial was over, the case takes an unexpected turn.

This again slams headlong into Public Shaming, a segment a couple weeks ago, that John Oliver did (Seen on HBO and HBOGO).  John speaks about this in great detail and it makes you stop and wonder, how does that happen? What gives these boys the right to do what they did.  What gives anyone the right to VIOLATE a woman? Violate anyone?

Did you know that sending illicit photos of boys and girls or yourself, naked, with or without their permission is a crime?  What we need to do as parents, friends, or family, is make sure that our children think before they do something really stupid and believe me, we all do stupid shit in our lives.

Do not let peer pressure steal your children’s lives away. Alcohol “IS” the MAIN FACTOR as well as date rape drugs to incapacitate your child.  If you notice that the blame is being placed on your child(ren) and they are worried about protecting the perpetrator, then you NEED to step up to the plate and get involved.  You need to make sure that you officials in the schools that your children are attending are doing their jobs to PROTECT your children. This film will make you cry and should make you think. Thoughts and prayers don’t help here, addressing the root cause, rape, is the only way you will find the solution.

The thing is, this film is NOT about victim-blaming, it’s about SILENCE and FEAR!  All in all, the kids are good kids… they made poor choices as did the coaches, teachers and other school district officials.  It’s OUR JOB to help our children GROW and LEARN.  If not, then you are just as guilty as your child, God forbid, for the deeds they do.

Hong Sang-soo’s TALE OF CINEMA: Korean Masterwork of Repetition & Doubling in a Film-Within-a-Film

OFFICIAL COMPETITION: A Quirky New Spanish Comedy About Actors and Their Egos