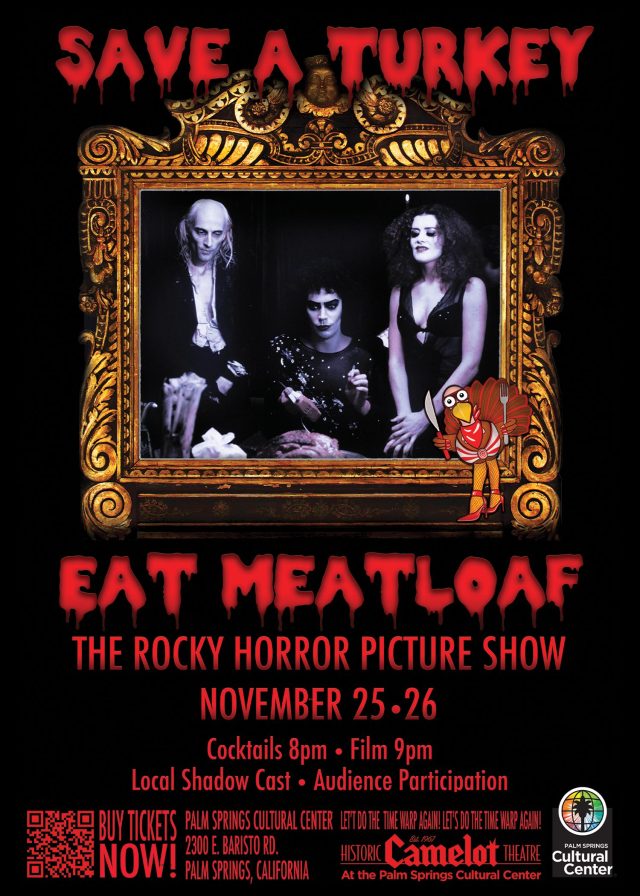 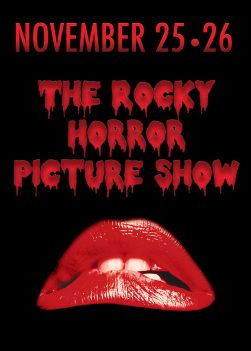 Palm Springs Cultural Center (PSCC) presents a special holiday screening of the cult classic “The Rocky Horror Picture Show” in the Historic Camelot Theatre at the Palm Springs Cultural Center, November 25 and 26. Experience the film as it was meant to be seen on the largest screen in the valley. Cocktail Hour starts at 8pm with a full bar, drink specials, and hot-buttered popcorn. Pre-Show and screening start at 9:00 pm. Tickets are $13 and available on Eventbrite and at the PSCC Box Office during business hours, 2300 E. Baristo Rd., Palm Springs, CA 92264

In addition to a full shadow cast, the two events will feature all of the classic elements of RHPS audience participation, including an interactive pre-show, screen call backs, and prop bags. The first 100 to arrive and check in for each event will receive a free prop bag, and a limited number of prop bags will be available for purchase.

UCSB Film Studies Alumni Katrina Storton will direct an all local full shadow cast on the stage in front of the screen. “I’m thrilled to direct and produce the first ever Coachella Valley Rocky Horror Shadow Cast in the Historic Camelot Theatre. Having been a lifelong fan of both Rocky Horror and the Camelot, I’m excited to share an experience that celebrates a love of the absurd with people from all walks of life at a theatre that was instrumental in shaping my film career.” said Cast Director Katrina Storton.

“Left the office to explore the unknown. It’s never too late to have fun!”

“UCSB Film Studies Alumni with a focus in the strange and unusual.”

“Calvin is a local writer and musician from Palm Desert. Originally from Santa Barbara, California, he is best known for his 2 year run as “Duncan the T-Rex” and other puppet work at the Santa Barbara Zoo. “

“Heather Joy is a professional singer and actress in the Coachella Valley, owner of the Top 40 cover band VIBRANCE, and has performed at the PSCC in music revues “Razzle Dazzle” and “Movie Magic” as well as a DTL Award-Nominated role for the Desert Ensemeble Theatre production of “Salty.”

“Eddie Teran grew up in Cathedral City where he started theater in Cathedral City High School. He Graduated from AMDA, a Performing art School in LA in 2016. His most recent production was in Palm Springs in the musical “Born to Sparkle.”

“I’m new to performing but I’ve always longed to climb on a stage and entertain. It thrills me to be part of this production.”

“Bryan, who majored in Marine Biology while @ CSU Long Beach, will attempt to recall his knowledge of scientific experimentations, as Dr. Scott.”

Fasten your garter belt and time warp again with The Rocky Horror Picture Show! When this cinematic sensation first sashayed onto the screen, moviegoers were treated to a gender-bending horror story/musical romantic comedy, and it remains one of the cinema’s most enduring cult classics. Based on the musical by Richard O’Brien (who also plays Riff Raff and who co-wrote the screenplay with Jim Sharman, who directed), the film follows a newly engaged young couple, Brad (Barry Bostwick) and Janet (Susan Sarandon), through the most unforgettable night of their lives. After their car gets a flat tire during a torrential rainstorm, Brad and Janet walk to a creepy castle, hoping to phone for help. But things take a turn for the outrageous when they meet the master of the castle – transvestite inventor Dr. Frank-N-Furter (Tim Curry, recreating his stage role). Not only is the “doctor” hosting an entourage of aliens, he has brought a spectacularly muscular man (Peter Hinwood) to life. As Brad and Janet engage in some unexpected debauchery of their own in Frank’s castle, they also witness shocking crimes! Also starring Meatloaf, Patricia Quinn, Little Nell, Jonathan Adams and Charles Gray, The Rocky Horror Picture Show is a hilarious, campy romp filled with song-and-dance numbers – and enough horror to thrill you, chill you and fulfill you from start to finish