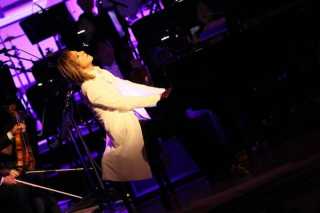 “YOSHIKI – Live at Carnegie Hall” features rock star and composer YOSHIKI as pianist joined by the Tokyo Philharmonic Orchestra, performing YOSHIKI’s compositions which have sold over 50 million records worldwide. Program highlights include YOSHIKI’s theme for the Golden Globes and his piano concerto composed for the Emperor of Japan’s 10th Anniversary, along with selections from Beethoven and Tchaikovsky.

YOSHIKI recently performed his first U.S. guest appearance on Sarah Brightman’s HYMN U.S. tour at Radio City Music Hall in New York on (February 6) and he’ll join her on March 9 in San Francisco at the Masonic and on March 10 in Los Angeles at the Dolby Theatre . The digital single “Miracle (Sarah’s Version)” –composed by YOSHIKI , performed by Sarah Brightman and featuring YOSHIKI’s performance on piano–was released in 2018, reaching the Top 10 on iTunes Classical Charts in 15 countries .

YOSHIKI’s film and television credits include composing music for Saw IV , Repo! The Genetic Opera , “The Golden Globe Awards,” and the hit anime series “Attack on Titan.” After receiving the Asian Icon Award from Classic Rock magazine (U.K.), YOSHIKI was chosen as the first Japanese man to appear on the cover of Vogue Japan . YOSHIKI is the leader of Japan’s most famous rock band, X JAPAN , who played Madison Square Garden and last year’s Coachella festival. X JAPAN’s first studio album in over 22 years will soon be released.

THIRTEEN is one of America’s most respected and innovative public media providers. A member of the WNET family of companies, THIRTEEN is a unique cultural and educational institution that harnesses the power of television and electronic media to inform, enlighten, entertain and inspire. The flagship public television station of the New York City tri-state area and the most-watched public television channel in the nation, THIRTEEN reaches millions of people with programming that celebrates arts and culture, offers insightful commentary on the news of the day, explores the worlds of science and nature, and invites people of all ages to have fun while learning . https://www.thirteen.org