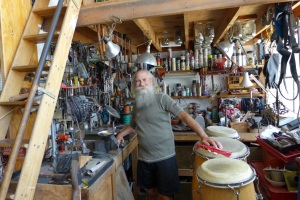 Chuck Krall: I had lived in San Francisco for a year or two when Linda Ronstadt played at the Berkeley Community Theatre. Before anyone knew who I was, before I had any credentials, I got backstage. I had several good cameras around my neck and I had the look, long hair, a beard, and a hat. I told security ‘that’s alright I’m cool’. Ben Fong-Torres was the feature writer for Rolling Stone and was interviewing Linda. I very nicely introduced myself and asked Linda ‘may I take some pictures while Ben is interviewing you?’ Linda and Ben were fine with that. In fact much later Ben used my photos in a book.

As I’m taking the pictures Jim Marshall is waiting to do a photo session. Later I went up to Jim and I said ‘hi I know who you are. I got your book Shooting Star and I really love your stuff.’ I asked him ‘do you have a business card?’ Then I met the real Jim Marshall. ‘I don’t have no fuckin business card! I’m in the white pages.’ He wrote his name out on a little piece of paper, which I always kept with other ‘business cards’ in a cigar box.

Jim also said to me ‘Chuck the most important thing as a photographer is that you gotta establish a price and never come down from that.’ I had learned in the Peace Corps the art of listening is more important then the art of talking. So I listened to this good advice. Jim could have been a dick to me since I was another photographer but he was not a dick and we became friends.

I got some Nikon SPs which were a Rangefinder camera. He used Leica cameras so he liked that I used Rangefinder cameras. He wasn’t’ friendly to everybody and he was really heavy into cocaine. He always thought that I did cocaine because I’m very speedy but I never did anything except smoke pot.  Jim told me if I sent him a Bob Marley print a guy would send him some white stuff from Columbia. I said Jim I’ll give you the print and you can do whatever you want with it. When I gave Jim the print he gave me one of his prints which is hanging on my wall still.

I had a professional relationship with Jim and he was instrumental in my career. I had an answering machine with a long musical introduction. Jim yelled at me and said ‘you don’t need all that crap all you have to do is say this is Chuck I’m not home leave a message.’ That’s the way he talked. Also Jim always dressed up when he was working. He wore a sport jacket, and a clean shirt. He wasn’t wearing Rock N Roll t-shirts. He always looked professional. Also he took no crap from the bands, something that I never had the ability to do. I could never yell at a band and say ‘hey look I’ve been waiting here for an hour’ I always had to play the game. Jim was often hired to do an album cover or a session for Life magazine. I was just hustling the job and would sell the shot later. Jim had the shot pre-sold. Sometimes however Jim couldn’t resell his pictures whereas most of the time I could sell my photos over and over again.

Bill Graham was a man who didn’t try to be intimidating but he was intimidating. He came out of the San Francisco Mime Troupe and he wanted to be an actor. He wasn’t a good actor but ended up being a good promoter/empresario. He got into staging. He was the only guy at that time who grounded his stages. If you played a Bill Graham show you didn’t get electrocuted. He was very meticulous. His stages were used by other promoters. He had a business that set up stages. He also started the business of selling merchandise, t-shirts, after the concert. Nobody did that before.

Early in my career I was really into Suzi Quatro. She came out of Detroit. Her father was the organ player for the Red Wings. Her brother Mike was an empresario in Detroit and another brother was in a band. Suzi was 5’1” and played the bass. She played like a guy. She did songs like Devil Gate Dr. ‘We’re all going down to Devil Gate Dr.’ She was great and Creem magazine really loved her. She wore black leather. She looked like those early Sci-Fi movies where buxom moon-women or martian-women came out in black leather.

I’m on stage photographing Suzi Quatro and she yells “Alright who wants to go to Devil Gate Dr.?” I was a big fan so I threw up my hands and yelled ‘I do.’ Next thing I know my camera had flown out of my hand. About 40 seconds later I get a tap on my shoulder. Bill Graham had been behind me and caught my camera. He handed me my camera and said “Don’t ever let that happen again!” That’s how I met Bill Graham. Two days later I made a beautiful print and handed it to Bill Graham and I said that will never happen again.

I really shouldn’t have been on stage at all. Bill Graham had two rules. If you were on stage you couldn’t step on a cable and you could never get in between the audience and the performance. Every show however I was on stage. I just walked up the gang blank found a spot out of the way and waited for an hour and a half for those shots to come to me. I was shooting at eye level. Shooting below stage you were shooting the performers nostrils.

Bill Graham’s PR firm was called Chutzpah Publicity. Whenever labels would want photos of his show Bill would say ‘Chuck will provide the pictures.’ He was my best salesman. Instead of record companies paying a photographer to come from Los Angeles or New York they would just call and say ‘we wanna see the photos.’

When I finally moved to L.A. I was pre-sold. The record companies A&M, CBS, Island, RCA, Epic, etc already knew me. It was an easy transition.