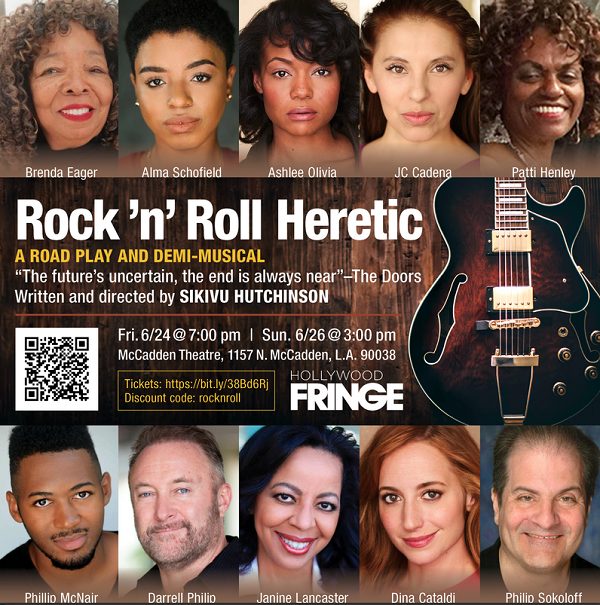 Friday evening was the first of two performances at the McCadden Theatre in Hollywood of a new play Rock ‘n’ Roll Heretic, written and directed by Sikivu Hutchinson, about the first lady of Rock ‘n’ Roll – Sister Rosetta Tharpe. The play is drawn from Hutchinson’s recently published book – Rock ‘n’ Roll Heretic: The Life and Times of Rory Tharpe (2021), about the ex-Pentecostal Black female electric guitarist Rory Tharpe in the later stage of her long career as a singer, song-writer, and guitarist. At age 60, Sister Rosetta Tharpe went back on the road with a city-to-city tour of the country in her dilapidated tour bus who was designed with sleeping arrangements in the back because of the limitations on getting hotels in segregated America under the restrictive Jim Crow Laws of the 1950s.

Sister Rosetta Tharpe was a tough, but resilient woman and first-rate performer who was used to dealing with deceptive record contracts, playing in dive bars and all-night recording sessions. She showed no fear in the pursuit of her musical career and in the last nationwide tour, traveled in that bus with her bickering, hard-drinking all-male band. Little Richard, Chuck Berry, Bill Haley and Elvis Presley are considered key figures in the development of Rock ‘n’ Roll. But Sister Rosetta, a talented and brave Gospel singer and musician, is the mother who gave birth to the sound that would take over the world. She was finally admitted to the Rock & Roll Hall of Fame in December, 2017. There is a fine one-hour documentary about her life and career with original film footage and interviews with people who knew her, at  https://www.youtube.com/watch?v=W_n0vkzc8PU. I mention that because the play “Rock ‘n’ Roll Heretic only tells a small part of the story of Sister Rosetta (Rory) Tharpe and is largely focused on her last big road tour at age 60.

Sikivu Hutchinson is an established scholar and expert on African-American culture and is known an American feminist, author/ novelist and playwright. She is the author of Humanists in the Hood: Unapologetically Black, Feminist, and Heretical  (2020) and Moral Combat: Black Atheists, Gender Politics, and the Values Wars (2011). She recently published Rock ‘n’ Roll Heretic: The Life and Times of Rory Tharpe (2021), and turned part of the book into a play by the same name. This is the play that Hutchinson herself directed for the Hollywood Fringe Festival. The production at the McCadden Theatre featured Alma Schofield, Brenda Eager, Ashlee Olivia, Patti Henley, JC Cadena, Janine Lancaster, Dina Cataldi, Philip McNair, Darrell Philip and Phillip Sokoloff.

The play Rock ‘n’ Roll Heretic seeks to tell the story of a Black female queer (bisexual) musician who continually had to face down the white-dominated music industry that grew out of early 20th-century Black Southern blues rock innovators such as Tharpe, Charley Patton, Son House, Mamie Smith, Bessie Smith, Muddy Waters, and Memphis Minnie. The play attempts to collapse a number of events in the life of Sister Rosetta (Rory) Tharpe into a 2-hour play. Perhaps, this is too ambitious and would work better as a typical Hollywood biopic with clear signposts about Rory’s past in flashbacks and the main story being her road trip across the United States late in her career.

In Hutchinson’s play, we catch a glimpse of Sister Rosetta (Rory) Tharpe, as a young girl growing up in Cotton Plant, Arkansas, and raised in the gospel-music environment of the Church of God in Christ by her mother Katie (played brilliantly by Brenda Eager). First, we meet the older Rory and a much older mentor who we realize is actually her mother. It seems that Rory’s mother has always had an issue with her daughter abandoning pure gossip music for the world of secular popular music. We are introduced to the little girl version of Sister Rosetta (Ashlee Olivia) who in 1921, at age six, joined her mother as a regular performer in a traveling evangelical troupe. Billed as a “singing and guitar playing miracle,” she accompanied her mother in performances that were part sermon and part gospel concert before audiences across the American South. This charming and diminutive child star singing in church mesmerizes the parishioners who saw her as an angel.

In the mid-1920s, Tharpe and her mother settled in Chicago, Illinois, where they performed religious concerts. In 1934, at age 19, she married Thomas Thorpe, a COGIC preacher, who accompanied her and her mother on many of their tours. The marriage lasted only a few years, but she decided to adopt a version of her husband’s surname as her stage name, Sister Rosetta Tharpe. In 1938, she left her husband and moved with her mother to New York City. On October 31, 1938, aged 23, Tharpe recorded for the first time – four sides for Decca Records backed by Lucky Millinder’s jazz orchestra. The first gospel songs recorded by Decca, “Rock Me,” “That’s All,” “My Man and I” and “The Lonesome Road,” were instant hits, establishing Tharpe as an overnight sensation and one of the first commercially successful gospel recording artists. “Rock Me” influenced many rock-and-roll singers, such as Elvis Presley, Little Richard, and Jerry Lee Lewis.

She had signed a ten-year contract with Millinder. Her records caused an immediate furor: Many churchgoers were shocked by the mixture of gospel-based lyrics and secular-sounding music, but secular audiences loved them. Tharpe played on several occasions with the white singing group the Jordanaires. Tharpe’s appearances with Cab Calloway at Harlem’s Cotton Club in October 1938 and later in “Spirituals to Swing” concert at Carnegie Hall on December 23, 1938, gained her more fame, along with notoriety. Performing gospel music for secular nightclub audiences and alongside blues and jazz musicians and dancers was unusual, and in conservative religious circles a woman playing the guitar in such settings was frowned upon. Tharpe fell out of favor with segments of the gospel community.

During this time masculinity was directly linked to guitar skills. Tharpe was often offered the compliment that she could “play like a man,” demonstrating her skills at guitar battles at the Apollo Theatre in Harlem. Her song “Strange Things Happening Every Day,” recorded in 1944 with Sammy Price, Decca’s house boogie woogie pianist, showcased her virtuosity as a guitarist and her witty lyrics and delivery. It was the first Gospel song to appear on the Billboard magazine Harlem Hit Parade. This 1944 record has been called the first rock and roll record.  Tharpe toured throughout the 1940s, backed by various gospel quartets, including the Dixie Hummingbirds.

In 1946, Tharpe saw Marie Knight perform at a Mahalia Jackson concert in New York. Tharpe recognized a special talent in Knight. Two weeks later, Tharpe showed up at Knight’s doorstep, inviting her to go on the road. They toured the gospel circuit for a number of years, during which they recorded hits such as “Up Above My Head” and “Gospel Train.” Though dismissed by both artists as gossip, several in the Gospel community speculated that Knight and Tharpe maintained a romantic and sexual relationship.

Tharpe attracted 25,000 paying customers to her wedding to her manager, Russell Morrison (her third marriage), followed by a vocal performance at Griffith Stadium in Washington, D.C., in 1951. After recording her album Gospel Train in 1956, Tharpe headed to the UK, where she was a big hit. In April and May 1964, Tharpe toured Europe as part of the Blues and Gospel Caravan, alongside Muddy Waters and Otis Spann. A famous concert, in the rain, was recorded by Granada Television at the disused railway station in Manchester, England in May 1964. The band performed on one platform while the audience was seated on the opposite platform. That video with her amazing voice and incredible guitar skills with “Didn’t It Rain” can be viewed at: https://www.youtube.com/watch?v=5SoZG4yDaJA

Of course, the majority of the story of Rory Tharpe is not in this play. We meet Sister Rosetta Tharpe first as a young girl who joined her mother as a regular performer in a traveling evangelical troupe with the Church of God in Christ. This mother figure played by Brenda Lee Eagers is always on stage, as a reminder of Rory’s origins in Gospel music and periodically pops up to remind her and the audience of that origin. Actress-guitarist Alma Schofield leads as Rory Tharpe, who is loosely based on Rosetta. The play quickly moves in the time period of the 1950s with Rory’s cross-country bus tour, often performing in dive bars and arguing with her all-male band members. In the play, these are her guitarist (played by Darrell Philip) and her white drummer (Philip McNair). In Boise, Idaho, her musicians manage to get rooms in a cheap hotel and it seems that the hotel manager Cruz (JC Cadena) quickly takes a liking to the rough and tough Rory and will become yet another of her female lovers.

Traveling east, they arrive in Chicago and much later in Memphis, where she encounters the Jude Justis (Dina Cataldi), a white woman blues-rock singer who has built a successful recording career out of singing music by Black musicians. Frustrated by the deceitful practices of white-dominated recording companies, Rory warily decides to perform with Jude for a while. Then she runs into Mason Mulvaney (Patti Hanley), who she knew from her childhood in Chicago. Mulvaney has become a high-toned preacher in the Church of God in Christ with her degree in Divinity. She talks Rory into performing with Mulvaney’s new mega-church enterprise Revivals, Inc.

Hutchinson’s play attempts to show us how difficult it was for a Black woman to survive and flourish in the midst of rock music industry indifference, racism, sexism, ageism, and homophobia. There is some music by the band Distant Engines sung by R&B legends Brenda Lee Eager (who has composed songs performed by Prince and a host of other music icons) and Patti Henley – who are both singers with careers in popular music.

Even in Rolling Stones’ List of the 100 Greatest Guitarists, there is no mention of Sister Rosetta Tharpe. Historically, Black women rockers were overlooked, as white male rockers took the spotlight. The guitar and especially the electric guitar was considered to be a male instrument.  Like most Black musicians during the 1960s British Invasion era, Black female musicians were considered less lucrative by the record companies and assigned to the “universal” category of R&B. They were often cheated out of their royalties, publishing rights, and master recordings, while seeing their work and stylings “borrowed” by lesser white artists. 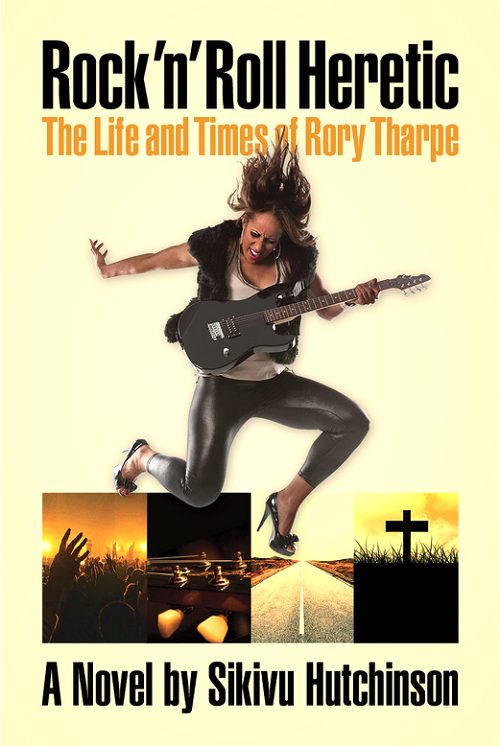 There is a curious character in the play who pops up from time to time: This is Sid (played by Ashlee Olivia), a young African-American girl who carries a tape recorder with her at all times. She clings to her tape recorder as a lifeline to the Black musical experience – as if it is a means of capturing the real history of the music she loves. As a sort of allegorical figure, Sid represents the voice of young Black girls who are trying to hold on to the music they love and protect it from being monetized by white commercial listeners. This is a larger concern of Sikivu Hutchinson as a scholar, feminist, and writer. Her play attempts to address the sad reality of what has often happened to female Black musicians, singers, and performers. The play is perhaps overly ambitious in the story it tries to tell and I am not sure the pieces all fit together coherently. A tightened version or different staging might improve the piece, because so many characters arrive only to disappear and we are left wondering who was the real Sister Rosetta (Rory) Tharpe.