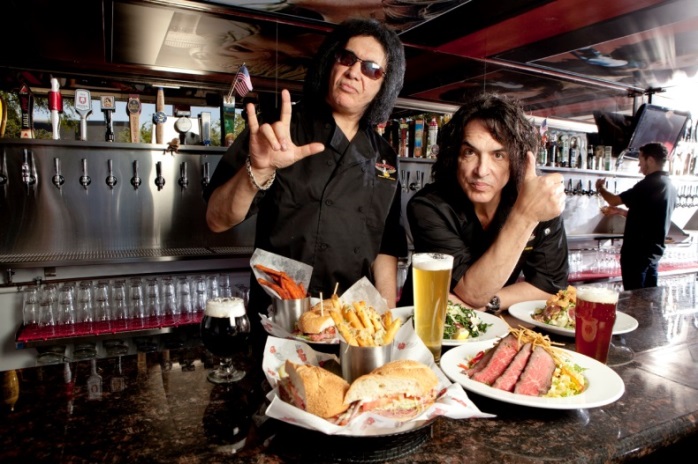 Corona, CA (September 27, 2016) – Today, Gene Simmons and Paul Stanley, rock legends and co-founders of Rock & Brews restaurants, announce grand opening activities for the new location in Corona to take place on Tuesday, October 18, 2016. Celebration activities will include a ribbon cutting and private luncheon at 1 p.m. hosted by the rock icons for more than 100 veterans and active military, as well as an evening event from 6 p.m. to 9 p.m.  A portion of proceeds from the evening event will benefit the local charity Guitars for Vets.

“We are very excited to be a part of the beautiful city of Corona and look forward to contributing to the flourishing community with our unique dining and entertainment experience,” said Stanley and Simmons in a joint statement. “We also look forward to honoring the veterans and active military of Riverside county who dedicate their lives for our country.”

The evening event from 6 p.m. to 9 p.m. will include a special presentation by Stanley and Simmons, a sampling of Rock & Brews’ quality American comfort food and two drinks per person for $100. VIP tickets to the event are available for $200 per person and include a private reception from 5 p.m. to 6 p.m., a photo opportunity with Stanley and Simmons and unlimited drinks. Guests may purchase tickets by visiting http://rockandbrewscorona.eventbrite.com. Space is limited.

The restaurant is located at 3550 Grand Oaks in Crossings at Corona. This opening marks the third Rock & Brews location for multi-franchise partner Jon Mesko, who also owns Rock & Brews locations in Buena Park and Redondo Beach, and one slated to open in fall 2016 in Rancho Cucamonga, CA.

Stanley and Simmons, along with their co-founding partners, restaurateur and hotelier Michael Zislis and concert industry veterans Dave and Dell Furano, are thoughtfully planning for worldwide expansion of the brand. Rock & Brews Corona joins the brand’s growing roster of restaurants that include six Los Angeles area locations (El Segundo, Redondo Beach, Buena Park, LAX Terminal 5, LAX Terminal 1, and StubHub Center in Carson); a restaurant in Paia on Maui; one in Overland Park, Kansas; a location in Albuquerque, New Mexico; one in Oviedo, Florida, as well as two international locations in Los Cabos, Mexico; a location in Oklahoma City, OK; and two others in Texas, one at the AT&T Center in San Antonio and the other at The Colony. Additional Rock & Brews restaurants in development are a location at San Manuel Indian Bingo & Casino, a location in Rancho Cucamonga, and more.

Rock & Brews is a one-of-a-kind, rock-inspired restaurant and entertainment concept designed to engage people of all ages with quality comfort food and local favorites, a broad selection of craft and international beers, and an energized environment that is reminiscent of being at a family-friendly music event.  Founded by rock icons Gene Simmons and Paul Stanley of KISS, along with partners, restaurateur Michael Zislis and concert industry veterans Dave and Dell Furano, the first Rock & Brews opened near Los Angeles International Airport in Southern California in April of 2012.  Each location boasts a backstage environment showcasing a “Great Wall of Rock,” iconic rock art, concert trusses and lighting and multiple flat screens sharing some of the greatest rock concert moments of all time.  Most offer a play area for kids and many are dog friendly.  For more information, please visit www.rockandbrews.com

About Guitars for Vets

Guitars for vets is a (501)3 non-profit organization founded in Milwaukee, Wisconsin in 2007. We operate more than 50 chapters in 25 states with the assistance of over 200 volunteers nationwide. Over the past seven years, our organization has refined a guitar instruction program aimed at providing veterans struggling with physical injuries, PTSD and other emotional distress in a unique supportive program. G4V pursues its mission to share the healing power of music by providing free guitar instruction, a new acoustic guitar and accessory kit in a structured program run by volunteers, primarily through the U.S. Department of Veterans Affairs facilities and community-based medical centers.