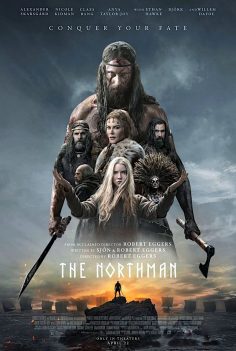 Los Angeles, CA (The Hollywood Times) 4/22/22 – Opening in selected theatres this weekend is Robert Eggers’ Northman (2022), an atavistic revenge horror film based on the Old Norse legend of Amleth in a tale that ultimately inspired Shakespeare’s play Hamlet. It is the story of a young nobleman intent on bloody revenge against the uncle who murdered his father and married his widowed mother. Eggers’ Amleth is far more assertive than Shakespeare’s melancholy Dane, eschewing the courtly, clever intrigue of Shakespeare’s day and Hamlet’s long soliloquies for the blood and mud and fire of Amleth’s 10th century Viking age. His past two films, 2015’s Puritan horror tale The Witch and 2019’s cabin fever two-hander The Lighthouse, are also about the brutality of yesteryear. At the end of the first millennium, the Vikings were still the much-feared masters of the seas and they controlled Denmark, Sweden, Norway, much of England, and the colony of Iceland. The Vikings or Northmen were drawn to raiding and pillaging other parts of Europe due to the growth of wealthy towns and monasteries overseas and weak kingdoms. In the world of 10th Norsemen, oratorical brilliance was not as important as brutal strength as a warrior and so in the world of Amleth, size matters.

Robert Eggers’ film is a simple story of revenge. Amleth (Alexander Skarsgård) seeks to destroy his uncle, Fjölnir who has killed Amleth’s father and taken Amleth’s mother, Gudrún, for his wife. Aurvandil, Raven King of the Jutes (Ethan Hawke) has returned home after a season of warfare, his Queen Gudrún (Nicole Kidman) waiting patiently for him, and his son Amleth, Prince of Jutland, (Oscar Novak) growing quickly. Meanwhile, Aurvandil’s bastard half-brother Fjölnir (Claes Bang) waits in the wings, plotting the Raven King’s betrayal which he performs in spectacular fashion, skewering Aurvandil with spears before lopping off his head. Amleth escapes by the skin of his teeth, fleeing the kingdom. To do that, Amleth must make himself scarce for a number of years heading to the Viking mainland of Norway and Denmark.

By the time we see him next, he has grown into a raging, howling wolf of a man, pillaging his way across Eastern Europe and plotting his vengeance against Fjölnir. He manages to grow into a huge 6’-4”, muscle-bound hulk with a limited vocabulary and raging bloodlust. With a band of Viking reavers, he spends his time raiding Rus’ settlements throughout Northern Europe. It seems that he is waiting for time and fate to reveal his opportunity to strike back at his uncle in Iceland. When that moment does arrive, Amleth voluntarily enslaves himself and gets shipped off to barren, dreaded Iceland, where Fjölnir rules over a petty little fiefdom, chased out of the land he violently overtook decades prior.

Just as in Hamlet, the supernatural comes to bear on The Northman. Björk plays a mystical seeress whose prophecy does actually seem pretty well informed. Amleth has visions of Valkyries and of the blinding light of Valhalla, suggesting that there are divine hands guiding his mission of retribution. It is also possible that he is a bit “mad,” seeing patterns and signs everywhere he goes because he is so consumed by his ultimately meaningless quest. We have a traditional robust Viking banqueting scene at the very beginning, at which Fjölnir is irritated by Aurvandil’s capering jester Heimir, played by Willem Dafoe, who in death is to get a very disturbing Yorick-skull moment.

Eggers is coy about the film’s deeper intention, whether all of Amleth’s struggle is meant to be appreciated on its literal terms or if it is offered as wry commentary on the shallow justifications men use to cloak their pride and vanity in righteousness. There seems to be something tongue-in-cheek about Amleth’s quest for vengeance in a tiny, remote Iceland settlement which is all Fjönir seemed to rule over after he was run out his former kingdom in Norway. Amleth stomps around this sorry settlement where Amleth will eventually learn that his father was a bit of a coward and his mother never loved his father, the former king. The grown Amleth played by Skarsgård prides himself on his inner animal “id” and seems to thoroughly enjoy hacking and slashing away in raiding villages.

In the film’s quieter scenes, when Amleth tries to enlist an enslaved woman from Rus named Olga (Anya Taylor-Joy) in his cause of revenge, we come to realize that she too has supernatural powers as a Rus witch. She seems to be the only character in the story capable of calming his internal rage and eventually eliciting romantic interest. Amleth is, at root, merely a pained and jilted son who only wants things settled or somehow to go back to how they were before the murder of his father. Like his Shakespearean later incarnation, Amleth struggled with the restlessness within himself, the storm of his angst and conflicted sense of duty. Skarsgård compellingly renders that mettle and that weariness; he makes us viscerally feel the exhausting journey of the film.

Fjölnir and his older son from a previous marriage cannot help but notice Amlet’s muscular frame and realize that he has potential for fighting. So they use him as a “slave” in a game resembling rugby against a neighboring settlement. When Amleth and some other brutes get to brawling over a ball for the amusement of Fjölnir and his cohort, Amlet manages to save Fjölner’s young son by Gudrún (Nicole Kidman) from possible death. This part of the story seems to get bogged down, but gives Amlet time to ponder his revenge strategy – slowly a bit like Shakespeare’s Hamlet in his famous procrastination.

The Northman’s source narrative may have inspired Hamlet but this tale’s natural bedfellow is undoubtedly Macbeth; indeed Eggers’ film is strikingly similar to Justin Kurzel’s visceral 2015 retelling of the Scottish play. And just as the madness of ambition is what inspired the Scottish warrior to overthrow his King, it’s the madness of rage that drives this Danish prince to exact vengeance. Amleth vows to torment Fjölnir before finally killing him and freeing his mother. But this leads to something of a slump in the second act where Amleth moodily waits until the time is right to strike – sounding familiarly like Shakespeare’s Hamlet. Olga, too, is sadly underwritten: her motivation to help Amleth after he sacked her village and killed her kinsmen is never really explored and so she ultimately functions as a foil to his quest.

The Northman is a horribly violent, nihilistic and chaotic story about the endless cycle of violence, the choice between loving your friends and hating your enemies – which turns out to be no choice at all, and the thread of fate down which masculinity’s delicious toxin drips. The film opens in violence and the ending does kick into operatic high-gear as a duet of masculinity with two naked hulks fighting to the death in the place they call “Hel” – in the lava flow of an erupting volcano.

The muddy, grassy, chilly, and barren terrain of the film is an unforgiving sight. Eggers and his team filmed in Ireland and Iceland, in spectacular and bleak landscapes. No question, The Northman is a spectacular visual and audio achievement that transports the audience to 1,100 years ago when people worshiped pagan deities and scoffed at safety regulations.