Los Angeles, CA (The Hollywood Times) 12/18/21 – “I intend to make them laugh as hard as they can for as long as I can,” said Cleveland newspaper columnist Artemus Ward, who first took his “humorous lectures” on the road in the 1860s. The London press dubbed his act “an American original art form,” later to be known as stand-up comedy. “Stand up,” it seems, was slang for a boxer who could take a beating in the ring and not keel over. The term worked well for a fellow (and it would only be a fellow, for a long time) who could get in front of a crowd armed only with his wits and stay upright.

If you didn’t know any of that – well, neither did I, until I laughed my way through Ritch Shydner’s History of Stand-Up Comedy at the intimate Yard Theater on Melrose Avenue. You may know Shydner from appearances on The Tonight Show Starring Johnny Carson, Late Night with David Letterman, and The Tonight Show with Jay Leno, or his own HBO stand-up special. He’s written for Roseanne, The Jeff Foxworthy Show and Titus. But at heart, it turns out, Ritch Shydner is a historian.

“It was Phyllis Diller who wanted me to write a book about stand-up comedy,” says Shydner, checking in from his home in Asheville, North Carolina. “I started on it, but it was reading like a textbook and I couldn’t think of anything worse than writing an unfunny book about comedy.” So he and director J. Elvis Weinstein (Mystery Science Theater 3000) put it on its feet. 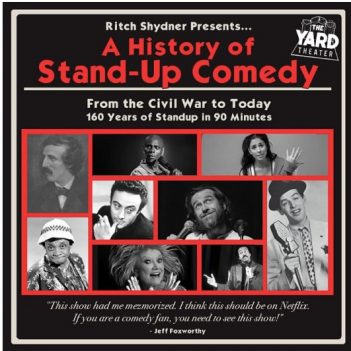 Now Shydner presents his own “humorous lecture” in clubs and on cruise ships, and is currently developing it for off-Broadway and as a limited series. The hardest part of putting the show together, he says, was figuring out how to contain it. “It’s 160 years in 90 minutes – I try to cover the big changes and big moments, but there’s so much.”

Turns out, when you cherry-pick through a century and a half of jokes, the audience is in for a lotta laughs.

The format is loosely structured around big changes like new technology and historical moments, changes that shaped the way comedy looked and sounded. The introduction of the microphone took us from Mark Twain lecturing at a women’s auxiliary, to Will Rogers selling out Carnegie Hall. The lecture stage begat the vaudeville stage, but then Prohibition drove comedy into the speakeasy. W.C. Fields was actually arrested in 1905, just for talking about drinking.

The introduction of radio rendered slapstick gags and funny faces obsolete, and also introduced the network censor, who literally blue-penciled things you can’t say on the radio. This is why comics who used bad language were said to be “working blue.”

It was the LP that allowed people to listen to what they damn well wanted in the privacy of their own home, which let stand-ups from Redd Foxx to Mort Sahl to George Carlin encroach on the family friendly Jack Bennys and Bob Hopes. Television brought back slapstick, but it also brought back censorship… until a disillusioned post-Vietnam public and the advent of cable TV unleashed the likes of Sam Kinison.

Shydner runs through all this plus the influence of social media, YouTube and the podcast at a gallop, and he says it kills him to think of all the great comics he still had to leave on the cutting room floor. He was already half-breathless from jamming in everything he did.

“I’ve tried every drug out there,” winks Shydner. “There’s nothing like uncut laughter.”

Here’s a joke you can tell at the holiday dinner table: “Diapers and politicians have to be changed frequently – and for the same reason.” Mark Twain told it 150 years ago, but feel free to steal it. To hear Shydner tell it, Twain could easily have stolen it himself.

A History of Stand-Up Comedy

Written and performed by Ritch Shydner