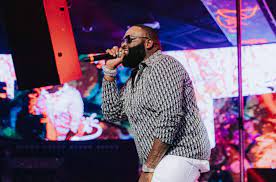 Last night, music legend Rick Ross kicked off the new year with a countdown to midnight at Drai’s Nightclub, the luxurious rooftop located right in the center of the Las Vegas Strip. Ross counted down with the electrified crowd, and as the clock struck midnight, the sky lit up with the magnificent firework shows of the surrounding hotels. The rooftop offered a stunning view of the fireworks, especially the Caesars Palace show which is right across the street from the club.

As guests partied into the early a.m., Ross took over the Drai’s stage with a full-length concert where he fired up the partygoers with his most well-known tracks like “Aston Martin Music,” “I’m a Boss” and “BMF.”

Fellow music artists Too Short and Memphis Bleek were seen ringing in the New Year with Ross at Drai’s. Ross also brought his family along as his special guests for this New Year celebration.