Los Angeles, CA (The Hollywood Times) 12/03/2019 Richard Jewell’s story is one of those bits of recent history that we sort of know, but not really. He was that security guard that discovered the bomb at Centennial Park during the 1996 Olympic Summer
Games in Atlanta, right? Only wasn’t he was actually the guy who planted the bomb or something? How did that all turn out, anyway? Was anyone hurt?

More than 100 people were hurt, one was killed, and yes, sad sack security schmo Richard Jewell went from hero to less than zero in three rollercoaster days when the FBI named him as the prime suspect. Only he didn’t do it, and in fact his quick thinking kept the carnage from being far worse. None of that kept the FBI from ruining his life, though, and Paul Walter Hauser — so good as the incompetent hired gun in I, Tonya — brings real compassion to his portrayal of this fat, deluded cop wannabe who can’t bring himself to see that the people he idolizes are destroying him. 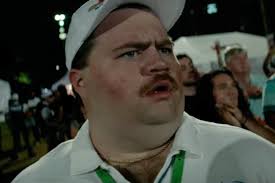 Clint Eastwood’s latest movie manages to wrest suspense from a plot where the whole world essentially knows what happens, in much the same way that Ford v Ferrari does. They’re similar movies, really. Both are shot in a straightforward style best described as “muscular” (Eastwood does a nice job of weaving in contemporaneous news footage) and both will appeal to a similar audience: adult males looking for onscreen heroes.

The most heroic character in Richard Jewell isn’t Jewell, though; he’s just too doughy and passive. That falls to Sam Rockwell’s Watson Bryant, the only lawyer Jewell knows to call when the Feds decide that he looks like the classic fireman-who-set-the-fire. 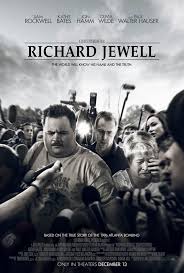 Lucky for him, Jewell picked the one guy with the “I fear the government more than I fear terrorism” poster on his wall.
The villains of the piece are Jon Hamm as the FBI agent willing to bend procedure to make his case, and Olivia Wilde as the reporter willing to bed a source to get her scoop.

Much has been made of the fact that the real journalist Kathy Scruggs, no longer alive to defend herself, probably didn’t sleep with any FBI agent. However, the real FBI agent probably didn’t look like Jon Hamm, either. Kathy Bates has a showy, if weepy, turn as Bobi Jewell — yes, Richard lives with his mother — and Nina Arianda (Billons, Goliath) is sweet-tart as Bryant’s Russian secretary.

(“Where I come from, when the government says someone is guilty, is how you know they are innocent. Is different here?”) All performances are fine, but none compare to the deeply felt characterization of Jewell by the relatively unknown Hauser, who snagged a role originally intended for Jonah Hill and breathed life and depth into a man most people would at best dismiss, at worst disdain.

Billy Ray’s script, based on Marie Brenner’s Vanity Fair article “American Nightmare: The Ballad of Richard Jewell,” isn’t overtly political, but the movie is still colored by the director’s point of view. This is a world where the college dean is an arrogant tattletale, but bubba on the gun range is a righteous dude. It is also never mentioned that the real bomber was a right-wing religious fanatic who also bombed two lesbian bars and a
women’s health center. That’s kind of important if your goal is to set the record straight.