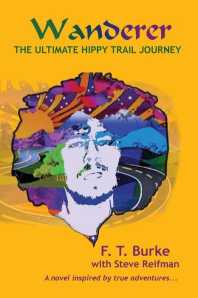 “During the crazy latter days of the Vietnam War, many young travelers wandered about doing drugs, having sex, sleeping out, and back-packing through Europe, North Africa and Asia. As a young man coming of age – just out of college, with no clear future and unable to pay rent, the bushy-red-haired Woodstock joins these revelers to wander the world, searching for his soul.

Upon beating the Draft, he crosses the Atlantic to the Old World in October 1970 without any particular itinerary, no set time to come ‘home’ and not much money. He finds God everywhere no matter how hard he tries to hide and look away. During his year-long journey, his spontaneous, free-wheeling adventures of raucous, hilarious incidents all weight heavy against the need to come home and grow up.

“Come along for this unforgettable adventure of a lifetime.’”

Sounds like an interesting novel but it’s laborious to read and not the unforgettable adventure to read – perhaps it was to live it. The hippy movement to many was dying after the Manson murders in the year this journey took place while the author wanted to dodge the draft and be on the Hippy Trail of the world from Woodstock to wherever it took him all the while doing what hippies did – a lot of sex, shared sex, drugs, rock ‘n roll and talk about “The Man” which is either the government, police or all rolled into one as representational of anyone of power.

I had hoped this book would be more evocative, alluring and honest. The language reads like a 12-year-old speaking of the 50’s not an 18 year-old self-proclaimed wild haired hippy of the late 60’s. The book does not take us on an unforgettable adventure, it has its moments but most is lost in badly edited campfire stories while one imagines the author and friend recounted over and over as if this would be the book on the ultimate hippy experience. It just isn’t.

For his friends, family it’s a wonderful book to get to know your friend/s but to a mass audience? There is little here to quench one’s thirst or hunger to understand a generation that helped define and shape the world.

I wanted to like this book but it’s just not that interesting and the quest for God is probably made more for those who seek structure yet find that having lived an unstructured life – without having anything to guide him or to have a dream to conquer and live out – was literally holding him back and keeping him stuck through a smoke-filled haze in his travels to endless countries.

Perhaps photos would’ve helped because it’s not an interesting read or new.