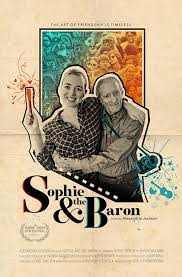 Co-produced by Courteney Cox, Sophie and the Baron is the inspiration we need.

PENNSYLVANIA (The Hollywood Times) 1/30/2022 – In a world of constant No’s it’s hard to imagine the creative freedom and reckless abandon it took to create documentary Sophie and the Baron, but somehow they did it.

Here, director Alexandria Jackson delivers to us the perfect “meet-cute” of renowned photographer Baron Wolman and artist Sophie Kipner.  With “Yes” as the mantra, it’s hard to say no to this quirky and original story about an artist recreating iconic photography by Rolling Stone lead photographer.  And yes, it does feel as whimsical as every creative player making up this lovable documentary.

Sophie’s artistic style could give control freaks a heart attack with her “line contour” method, in which she freely draws the images she sees without looking at the canvas.  She creates free form depictions of people and events in a way that feels indeed off-the-wall, as images come to life instantly with dynamic surrealism.  As promised, with her shading technique and attention to detail she pulls off a fantastic style blending traditional line work with sheer playful abstraction. 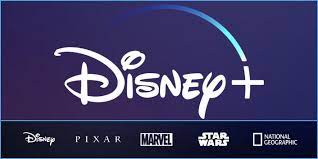 And if you think you aren’t familiar with Baron Wolman, think again.  His iconic photographs are ones you’ve likely seen and loved, creating visual story telling about the free spirited lives of artists, groupies, and those who follow the off beat.  He famously depicted Woodstock and brought us personable portraits of legendary stars.  That portrait of Johnny Cash broodingly looking beyond the camera—you guessed it—was captured by Wolman.  Mick Jagger, Jimi Hendrix, Jerry Garcia… he was the guy that photographed Janis Joplin up close during an in-home concert.  His photos translate the wild antics of artists and allow the viewer to experience it as openly as Wolman expresses them.

“Just say yes,” Wolman says jovially as he talks to the camera. 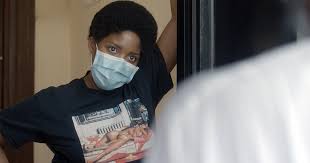 It was this attitude that allowed the intergenerational pair to connect and take art to a playful reinterpretation.  The story chronicles their meeting and what led them to bond as Sophie reimagines many of Wolman’s iconic photos.  Sophie tackles an overwhelming photo depicting the crowd at Woodstock in ways that made me curious until the end.  But just like the director, cast, and crew, she pulls it off in a whimsical fashion.

The documentary was co-produced by Friends star Courteney Cox, Alexandria Jackson, and Joanna Natasegara.  With director Alexandria Jackson at its helm it has won a multitude of awards.  It was beautifully composed by Joel Taylor and appropriately features a handful of artists’ original songs.  It feels like a group effort and the feel-good attitude is attributed to what happens when friends collaborate.

It’s no wonder the fantastical Disney chose to pick up the story, as the tight knit dynamic of Kipner and Wolman makes you feel overall good vibes.  As Kipner puts it, it’s the “unity we so desperately need right now.”  Jackson describes the process as “instinctive.”  In a feature that is considered the “book end to his life,” this documentary made me feel that anything might be possible.  Even with the painful loss of Baron Wolman in 2020, we are left feeling that it will all be truly an inspiring ride.

At just 30 minutes in length, this documentary is easy to absorb and it begs the question “why not?”  Sophie and the Baron will premiere on Disney+.

It promises to inspire and in the words of Baron Wolman, “you’re going to be on a magic carpet ride if you’re lucky.”

And one thing’s for sure, it took a lot of magic and maybe some luck to form this blissful story.