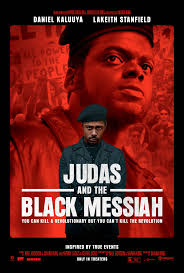 Los Angeles, CA (The Hollywood Times) 2/17/21 – Daniel Kaluuya excels in his portrayal of Fred Hampton, the leader of The Black Panther Party of the late ’60s. To say his performance was electrifying doesn’t begin to describe the depth of it. Kaluuya provides a riveting account of an influential, charismatic, and sometimes controversial civil rights activist figure from our nation’s tragic past. He clearly demonstrated the internal struggle of a torn man, who felt so strongly about this country’s injustice towards his race that he forced himself to take action. Kaluuya visibly changes both his body stature as well as his voice inflections when Hampton is speaking about what must be done, the changes that are needed, and what it will take to do so.  The fact that this character is only referred to as a supporting actor (Oscars) is also an injustice. In my opinion, he stole the show, the script, and all the applause.

Though it was obvious early on that Hampton was headed for a tragic end, just like MLK Jr and Malcolm X before him. This is truly a story that needs to be told. King and Benson create an exceptional screenplay (based on a story by Kenneth and Keith Lucas), combining historical facts while maintaining an engaging and entertaining experience, a difficult thing to do with this sort of subject matter. However, it seems a little off, that the narrative comes from O’Neal’s (Stanfield) point of view and more from the oppressive (white) government viewpoint rather than what should have been obvious. But since these are still many of the problems we are currently facing to this very day, maybe that is to be expected. I would like to mention that King was able to create a more accurate account of these realities than most have been done in the past.

“Judas” was excellently written, (King, Benson) directed (King) and the acting was exquisite. Several noteworthy performances elegantly displayed the depth of talent with exceptional portrayals by LaKeith Stanfield as Bill O’Neal, a man who wrote his own tragedy, ultimately being turned into an FBI informant, breathes a real-life struggle into the role. Dominique Fishback was genuine as Hampton’s girlfriend, Deborah, which was a welcomed addition to the cast and added a more intimate nature to the film. The female influence from many films that have come before has sorely overlooked this integral part of the story, leaving out the “personable” connection that audiences need to make it “real”.

Overall, it was a tremendously accurate and brutally honest film about a tumultuous and horrifying time in American history when our own government, led by powerful, opinionated individuals, who had basically declared war against The Black Panther Party and the dramatic events that followed.