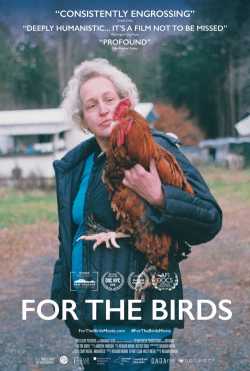 The story of a woman’s love for her pet ducks, chickens, geese and turkeys
– all 200 of them…

HOLLYWOOD, CA (The Hollywood Times) 05/31/19 – Director Richard Miron’s documentary – For the Birds – is a poetic and intriguing look into the marriage (since 1987) and lives of Gary and Kathy Murphy. Kathy’s obsession of owning and living with her menagerie of pet chickens, ducks, geese and two turkeys has taken a toll on her husband, their relationship and the mobile home they inhabit and soon-to-be an issue with local authorities.

The film, shot over a five year period introduces us to the couple with present footage while intercutting family movies depicting their young love, until a duckling showed up one day and Kathy took it in. Ten years later: The local SPCA writes, “Following a tip from local officials, investigators visited the home of Gary and Kathy Murphy. Large number of fowl in violation of town ordinances.” Then, they refer the case to the Woostock Farm Animal Sanctuary.

FOR THE BIRDS TRAILER

The relationship between Kathy and the shelter workers is a realistic view at what a government agency will do to manipulate, lie and ultimatley betray to get what they want but they hadn’t planned on the love Kathy has for her birds. With Gary looming around proclaiming, “this has to stop” trying to comprehend how life got worse and worse surrounded by the menagerie. We watch a husband’s life begin to crumble when he backs the sanctuary workers to get rid of the birds living inside and outside their mobile home hoping to get his wife help. Kathy would rather “die than lose her birds.

Kathy agrees to give up her two beloved turkeys for medical treatment and that’s when the documentary lures you into a relationship with the bureaucrats as well as the demise of Gary and Kathy’s marriage over her fight to get her birds back. They are abruptly removed when a search warrant is issued and taken to the sanctuary.

The SPCA gets the news on their case because Kathy hired a local lawyer and puts off the adoption process for the birds. Listening to the judge and prosecutor is worth the ticket alone. Is she the crazy lady with the bird fetish or is she just a woman who has signs of mental illness that wants to be left alone and be with her feathered “family”? They all have names and the affection between them is real yet the conditions are pretty horrific.

Everyone involved in the case of the birds is deeply affected in one way or another. Miron’s ability to mix compassion with humorous and frustrating pathos hooks the audience in – asking us to understand the sides. When Sanctuary worker – Sheila Hyslop – decides to return to her native Scotland from the toll this case has taken – it’s heartbreaking.

The deeper meaning of this documentary is about the couple and it is here that For the Birds magnificently examines a long-term couple who ultimately pay the highest sacrifice – moving apart yet staying connected. We can feel Gary’s angst as if we woke up with him one day and said, “What the hell is going on with our lives? How did it get this far? It has to stop! She needs to understand she’s mentally ill and I have diabetes.” We feel Kathy’s desperation and anger at having her birds ripped from her and the underlying lies and betrayals – admittedly committed – by both the sanctuary and her husband.

For the Birds is a richly tender uncomfortable look at the human condition while examining the various sides. It visually demands that you sit and pay attention until the bittersweet ending.

Executive Produced by Brian Reed (host and co-creator of the hit podcast “S-Town”) and Cindy Meehl (director of the award-winning Buck), Directed/Produced by Richard Miron, Produced by Jeffrey Star and Holly Meehl.