Just how much did Hollywood heavyweights get paid for some of the most memorable movie one-liners of all time? 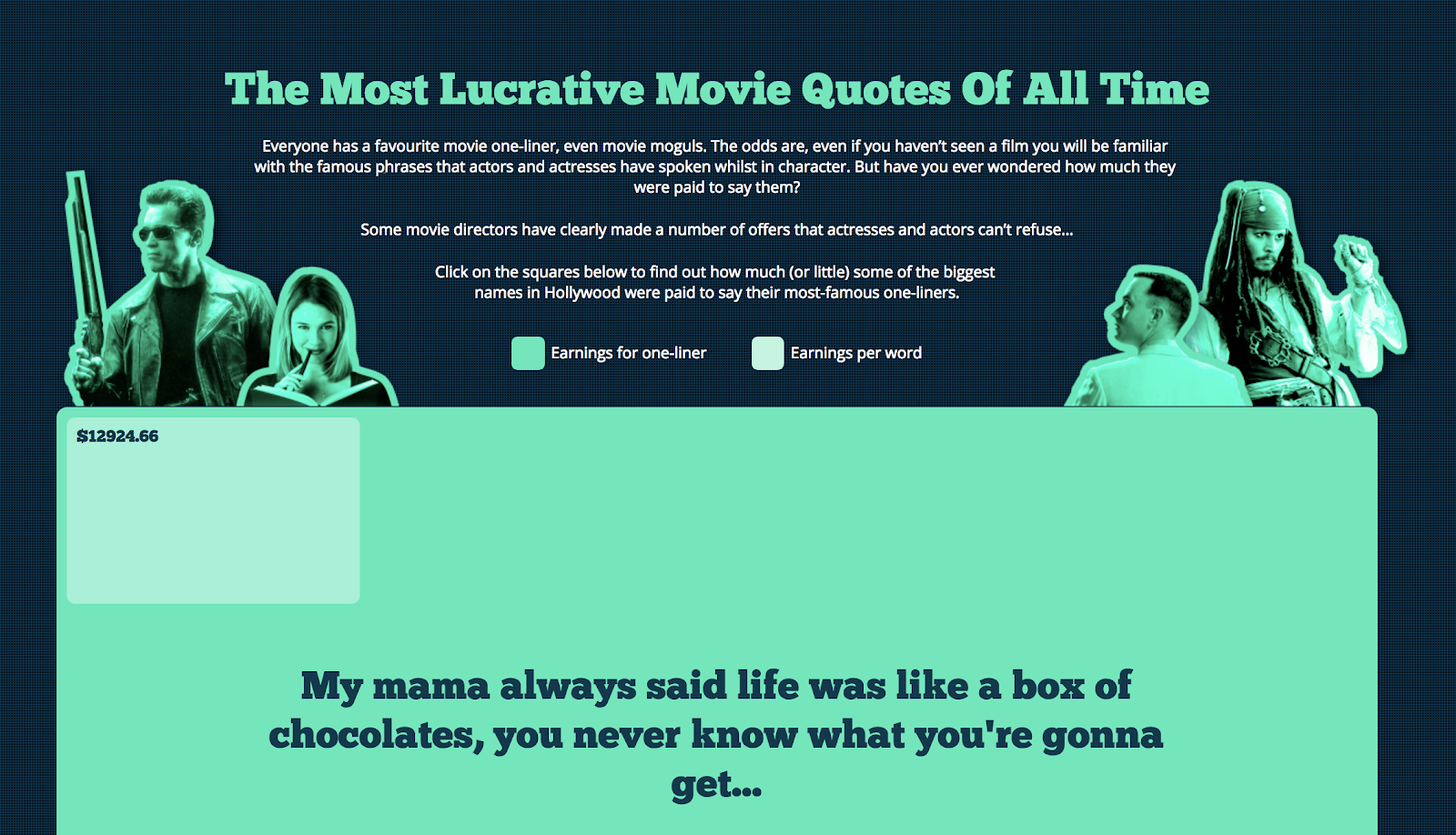 ‘You talkin’ to me?’.  Indeed, we are! Most of us can reel off some of our favourite movie sayings with ease, but have you ever wondered how much the superstars were paid to say them?  Vouchercloud’s new interactive graphic reveals the most lucrative movie one-liners of all time along with some of the least.

Here at Vouchercloud, we have collated some of cinema’s favourite phrases to see how much each actor or actress made from them, and the results aren’t what you’d expect. Vouchercloud can reveal that figures range from an astonishing $232,644.01 to a little over 10 dollars – but who made the most?

It came as no surprise that Tom Hanks for his role as Forrest Gump in Forrest Gump (1994), earned a huge $233,644.01 for his classic line; “My mama always said life was like a box of chocolates, you never know what you’re gonna get”.  Hollywood A-listers such as Julia Roberts and Brad Pitt were chasing Hanks top spot, and took second and third place respectively.

The fourth highest paid one-liner, “I’ll be back”, earned Arnold Schwarzenegger a comfortable $64,285.71. A weighty $21,428.57 for each word, and in his role as the Terminator he only spoke a grand total of 700 words throughout the whole movie – not bad Arnie, not bad at all!

Those just short of the top five highest paying mark include Die Hard (1988), with the saying “Yippie Ki Yay motherf***er” from Bruce Willis that earned him a tidy $11,808.33, and lead actress Renee Zellweger’s phrase “Bridget Jones, wanton sex goddess, with a very bad man between her thighs…Hi Mum”, from Bridget Jones’s Diary (2001), that earned her an impressive $10,786.19.

But, some film stars weren’t as lucky with their earnings. Whilst their one-liners pop into your head, can take you way back, and can stay in your mind forever; they failed to earn their speaker millions.

Here are five of the lowest paid one-liners:

Hollywood heavy weights such as Travolta, Stallone and De Niro failed to make more than $100 dollars for their classic one-liners.  Even though Tom Hanks holds the top spot for the highest-paid one-liner in Forrest Gump, his role as Chuck Noland in the movie Cast Away (2000) and the one liner “Wilson!” wasn’t as lucrative. It earned him a modest $492.12.

Another famous performer that makes both of Vouchercloud’s lists is Julia Roberts. The actress has graced our screens since 1987, performing in critically acclaimed films such as Erin Brockovich (2000) for which she won an Oscar for Best Actress in a Leading Role, Steel Magnolias (1989), Pretty Woman (1990) and My Best Friend’s Wedding (1997). Julia Roberts has won almost 60 accredited acting awards such as Golden Globes and an Oscar been nominated 96 times.

Did your favourite one-liner make the list – was it millionaire-making or just a handful of dollars? Find out by viewing the full interactive content here.