The children’s television series “Mister Rogers’ Neighborhood,“ hosted by Fred Rogers, began in 1968 on National Educational Television (NET) and ran on its successor, PBS, through August 31, 2001…CBS sitcom “Gomer Pyle, U.S.M.C.,“ starring Jim Nabors and spun-off from “The Andy Griffith Show,” shot its last scene (episode #150) in 1969. It aired on May 2, 1969. Shazam!…

Did You Know?:
In 2013, Millie Bobby Brown made her acting debut as a guest star in the ABC fantasy drama series “Once Upon a Time in Won

Netflix Orders Drama “Painkiller”
Netflix has announced drama “Painkiller” from producer Eric Newman (“Narcos”), which focuses on America’s opioid crisis. Alex Gibney (“Going Clear: Scientology and the Prison of Belief,” “Enron: The Smartest Guys in the Room” will serve as executive producer. Eight episodes have been ordered.  Patrick Radden Keefe (“Dirty Money”), who wrote New Yorker’s “The Family That Built An Empire of Pain” and Barry Meier, author of “Pain Killer: An Empire of Deceipt and the Origin of America’s Opioid Epidemic” will both consult on “Painkiller.” Their respective master works serve as underlying material for the series.
Showtime to Develop “The Auteur”
Showtime has ordered multiple scripts of proposed half-hour series “The Auteur,” starring Jude Law (“The Young Pope”) and directed by Taika Waititi (“JoJo Rabbit,” “The Mandalorian”), who will also write with Peter Warren (“Ghost Team”). The project, produced by Showtime and Legendary with Endeavor Content serving as studio, is based on the graphic novel by Rick Spears, James Callahan and Luigi Anderson.

The logline: Desperate to make a great horror movie after a massive bomb, a film producer accidentally traps his production on a backlot with a serial killer. “The Auteur” is a gonzo horror-comedy, a twisted romance and a glamorous, high wire act of biting satire.

In the series, audience members compete for a potential four rounds and the chance to win cash prizes. They try their hands at “Blindfolded Musical Chairs,” “Dizzy Dash,” and “Scary Go Round,” as well as other contests. To advance to play “Know or Go,” a player must win in a given round. The one who makes it all the way to the final round ultimately gets the chance to play “Hot Hands,” in which they have to supply correct answers to questions in a set amount of time.

BET Renews Comedy “Bigger” for Season 2
BET+ announced the second season pick-up of the Will Packer and Will Packer Media executive produced series, “Bigger.”  The series follows Layne, a single-black-woman and her close-knit group of 30-somethings as they navigate love, friendships, career ambitions, and the journey to getting bigger together. When a college acquaintance suddenly dies, the group is forced to take a deeper look at their messy lives, while asking themselves— is this it or is there something bigger and better? 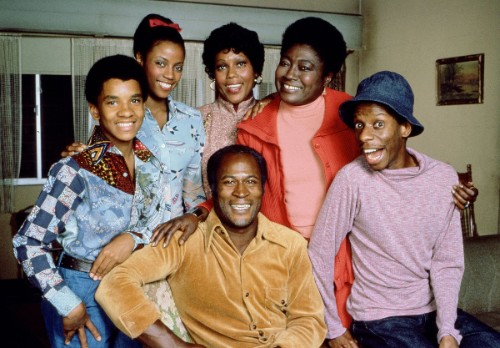 Ja’net DuBois, who is remembered for her six-season stint on CBS sitcom “Good Times,” was found dead in her Glendale, California home on Tuesday. Her family told TMZ the actress died unexpectedly in her sleep. She was believed to be 74 years old.

Born Jeannette DuBois in Brooklyn, New York (according to one source), her status as supporting character Willona Woods on the “Maude” spin-off was upgraded to lead in the fifth season (in 1977-78) after Esther Rolle temporarily exited “Good Times.” At the time, DuBois’ Willona adopted a young girl named Penny Gordon, played by Janet Jackson, and remained on the series through the series-finale on January 30, 1980.

Ironically, the characters of Florida Evans (Esther Rolle) and Willona Woods on “Good Times” were supposed to be former schoolmates, but there was an estimated 25 year age difference between the two in real life.

DuBois was also a singer and a songwriter, known in particular for co-writing and performing the theme song for comedy “The Jeffersons.” For more, click here

Oxygen true crime series “Cold Justice,“ from executive producer Dick Wolf, will open a new season on Saturday, March 14 at 6 p.m. ET. Working alongside local law enforcement from across the country, the “Cold Justice” team has successfully helped bring about 20 convictions and 45 arrests, five of the arrests which will be seen in this upcoming batch of new episodes. The series follows veteran prosecutor Kelly Siegler and her rotating team of seasoned detectives – Johnny Bonds, Steve Spingola, Tonya Rider and Abbey Abbondandolo, as they travel to small towns to dig into unsolved homicide cases that have lingered for years without answers or justice for the victims.

Documentary series “Tiger King,“ which follows a controversial animal park boss who is caught in a murder-for-hire plot, will be available for streaming globally on Netflix on Friday, March 20. The series is executive produced by Chris Smith (“FYRE: The Greatest Party That Never Happened, Jim & Andy: The Great Beyond, American Movie”).

Season two of A+E’s “Ghost Hunters” will open with two episodes on Wednesday, April 8 at 8 p.m. ET, leading into the premiere of “Celebrity Ghost Stories” at 10 p.m. ET. Each one-hour episode of “Celebrity Ghost Stories” follows psychic-medium Kim Russo as she brings names in entertainment back to the sites of their previous paranormal experiences. In the premiere episode, Kim meets with rapper and Ice-T and his wife Coco as they explore a New Jersey factory and experience unexplainable events linked to the factory’s deadly past.

ON THE AIR TONIGHT
“Criminal Minds” concludes on CBS…IFC debuts “Year of the Rabbit”…NBC offers the next Democratic National Convention…Season finales: “Black Ink Crew” on VH1; “To Catch a Smuggler” on NGC…For the listing of available programs for Wednesday, February 19, click here