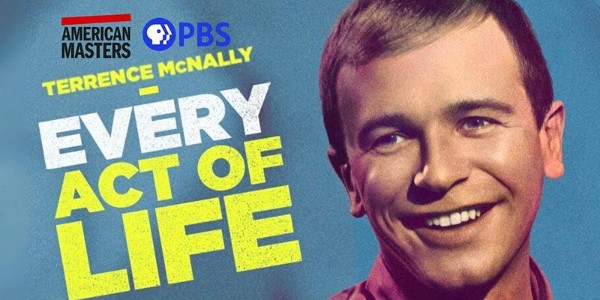 TERRENCE MCNALLY: EVERY ACT OF LIFE

STREAMING ON PBS.ORG AND THE PBS VIDEO APP

June 11, 2020 – Los Angeles, CA – Floating World Pictures will be celebrating the life and legacy of the late Tony® Award-Winning playwright and LGBTQ activist Terrence McNally through the award-winning American Masters documentary TERRENCE MCNALLY: EVERY ACT OF LIFE, streaming on  pbs.org/americanmasters and the PBS Video app June 15 – August 31, 2020. In addition, special virtual online discussions and talkbacks with some of Broadway’s brightest stars will take place beginning June 17 as they remember and honor the legendary McNally.

Moderated by Lucy Mukerjee of the Tribeca Film Festival

Panel Discussion with Director, Writer and Producer Jeff Kaufman and

Panel Discussion with Director, Writer and Producer Jeff Kaufman together with

For more information on these events and how to RSVP please go to www.everyactoflife.com

The film captures McNally’s essence and acts as a beacon of hope for future generations of writers, LGBTQ+ youth, and storytellers who also dream of living out loud. It premiered at the 2018 Tribeca Film Festival to stellar reviews and endearing audience reactions. In June 2019, American Masters broadcast the film nationally on PBS. The film has been submitted for the 2020 EMMYS® consideration in several craft categories including Non-fiction Directing; Non-fiction Editing; and Non-Fiction Sound Mixing.

LARRY KRAMER/TERRENCE MCNALLY – OUT TAKE FROM “EVERY ACT OF LIFE” https://youtu.be/rYV5ZtNdYrU
Credit for the clip is:  Courtesy of Floating World Pictures

Funding for TERRENCE MCNALLY: EVERY ACT OF LIFE is provided in part by National Endowment for the Arts, plus The Edward F. Limato Foundation, The Noël Coward Foundation, and The Hunter Ward Foundation.