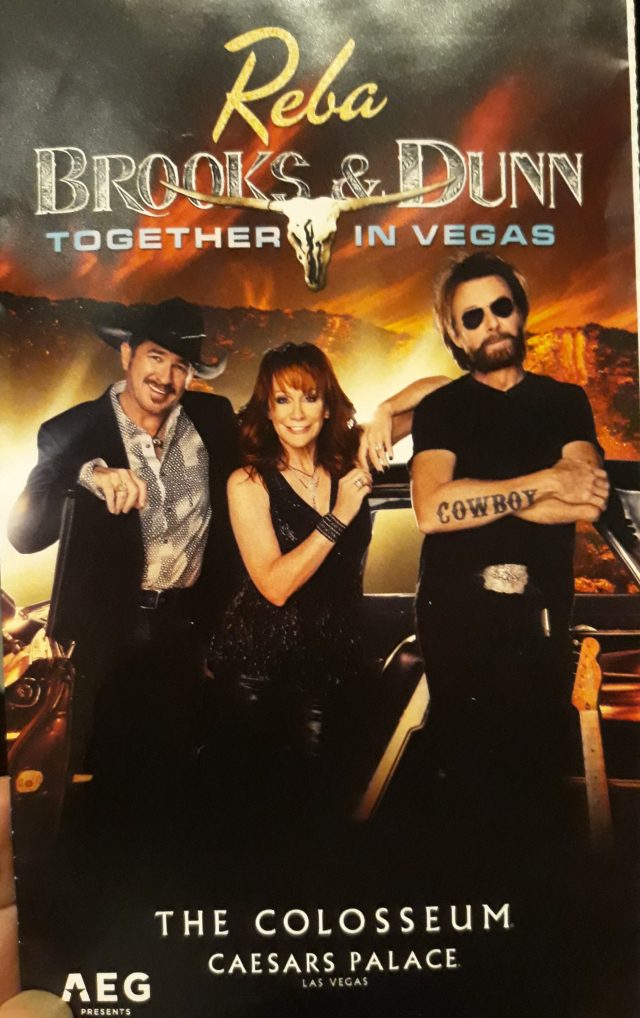 Las Vegas, Nevada (The Hollywood Times) 10/15/2018 “My favorite song that we will perform onstage tonight is I Will Miss You,” Reba McEntire told The Hollywood Times during a brief meet and greet and photo opportunity with her and Brooks & Dunn before their concert this past Saturday night.

Kix Brooks was definately the go to guy, who rounded up the lucky meet and greet fans who were lined up to await their turn to take a picture with these talented entertainers.  Ronnie Dunn is the quite one of the bunch, but he stepped forward and extended his hand out to Steve Viero and said “Thanks for coming.”

That was cool.  All three of them were quite conversive with the fans and so happy to take a photo with them.

Country superstars Reba, Brooks and Dunn collaborate for a one-of-a-kind residency show.  There’s no other place on the Las Vegas Strip where you get to see three of country music’s finest take the stage for an entire night filled with all of your favorite songs throughout their successful careers. But ShowTickets.com has your tickets to be in the audience and share this unique experience with your family, friends and other country music lovers. Purchase your tickets to “Reba, Brooks & Dunn: Together in Vegas” today!  https://lasvegas.showtickets.com/reba-brooks-dunn/

Catch “Reba, Brooks & Dunn: Together in Vegas” at the Colosseum in Caesars Palace with tickets from ShowTickets.com. You’ve heard her hit songs on the radio, bought multi-platinum selling records, seen her star on movie and television screens and watched her perform live in concert as the No. 1 female Country touring artist. And now, Reba will join the most-awarded act in ACM history, Country’s legendary duo Brooks and Dunn. With 23 chart-toppers and 30 million albums sold, they’ve also become the best-selling duo in country music history and have been named Entertainer of the Year four times collectively by the ACM and CMA. So what are you waiting for? This is your chance to see epic talent all on one stage in “Reba, Brooks & Dunn: Together in Vegas!” 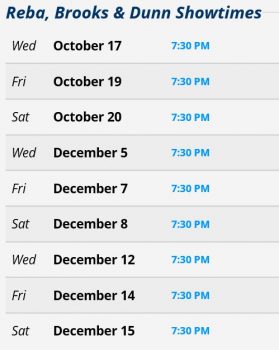 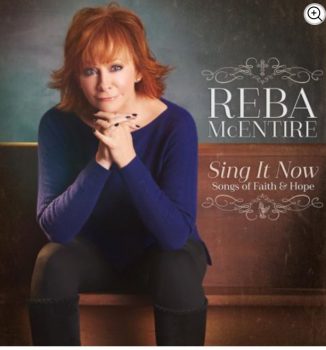 Reba performed a song from her first Gospel album called “Back to God.”  What an amazing song and video that was shown on the big screen above her.  It sure was a crowd pleaser with an Amen at the conclusion of the song.

The concert had the three enterainters telling stories about the songs they performed, the tours they have done together and behind the scene practical jokes.  Can’t give any of those away, so go see the show to hear them all!

Here is the list of songs that they performed.  All excellent song choices.

“Only in America” (B&D) (with Reba McEntire)

An evening with Robby Krieger