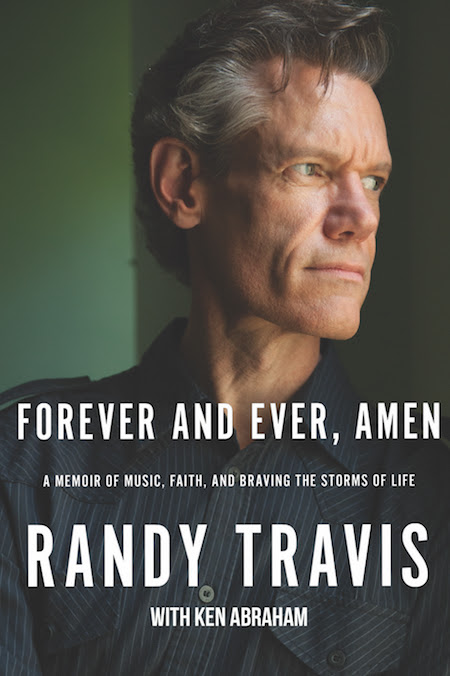 Music Icon Featured on TODAY Show, People Magazine, Wall Street Journal, Billboard, Taste of Country and More
NASHVILLE, TN (May 14, 2019) — Fresh from celebrating his 60th birthday at the Grand Ole Opry with friends, family and a sold out crowd, Randy Travis is releasing his long-awaited memoir, Forever and Ever, Amen: A Memoir of Music, Faith, and Braving the Storms of Life. With the help of New York Times Best-Selling Author, Ken Abraham, and Travis’ wife Mary, this memoir recounts the singer’s journey of perseverance and redemption from his early childhood memories up until the book was penned, recovering from a life-changing stroke and painful divorce, enjoying the life he was given and learning to “sing a new song.” The book can be purchased at various retailers as well as www.foreverandeveramenbook.com.

“‘Even in his state, his semi-coma state, he squeezed my hand,’ she told Jenna Bush Hager in an interview alongside her husband on TODAY Monday. ‘And he laid there, and this tear just fell. And I went back to the doctors and I said, ‘We’re fighting this.’” – Mary Travis on TODAY

“Despite the singer’s limitations, ‘I don’t think he’s ever seen himself as a victim…’ – Mary Travis in People

“We all have mountains to climb and battles to fight—I’m no different. It’s my hope that someone may read my story, and either be inspired to keep up the fight and/or detour off the roads that are dead-ends,” he says. “I have always been transparent in the mistakes I’ve made—the book is no different.” – Randy Travis in Billboard

“’He’s a warrior. He’s an angel,’ Mary says when asked what Randy is like as a husband.” – Taste of Country

With candid, never-before-told details, Travis recounts his troubled youth full of drinking and stealing cars, a tense relationship with his father, and the rollercoaster ride of more than 40 years in the music and acting industry. He also shares the highs that came after playing “Forever and Ever, Amen” for the first time; having countless number one hits and selling more than 25 million albums; and most importantly, the faith that has seen him through all of it.

Travis will have a booth with books for purchase and daily photo opportunities during the upcoming CMA Fest in Nashville, Tenn., as well as a book tour in select markets. For more information about Forever and Ever, Amen, the tour and Randy Travis, please visit www.RandyTravis.com.

About Randy Travis
With lifetime sales in excess of 25 million, Randy Travis is one of the biggest multi-genre record sellers of all time and a recent inductee into the Country Music Hall of Fame class of 2016. His honors include seven Grammy Awards, 10 Academy of Country Music statuettes, 10 American Music Awards, two People’s Choice awards, seven Music City News awards, eight Dove Awards from the Gospel Music Association and five Country Music Association honors. In addition, three of his performances earned CMA Song of the Year honors: “On the Other Hand” (1986),

“Forever and Ever Amen” (1987) and “Three Wooden Crosses” (2002). To date, he has 18 No. 1 singles, 29 Top-10 smashes and more than 40 appearances in feature films and television shows to his credit. Ten of his albums are Gold Records. Eight are Platinum. Two have gone Double Platinum. One is Triple Platinum and another is Quintuple Platinum. In 2004, Randy was honored with his own star in the Hollywood Walk of Fame and is honored on the Music City Walk of Fame in Nashville, TN. He has been a member of the cast of the Grand Ole Opry since 1986. In 2017, Randy was honored with a wax figure at Madame Tussauds™ Nashville. Since his near fatal stroke in 2013, with the help of his wife Mary and rigorous physical therapy, Randy continues to make improvements in his speaking, walking, and yes, singing. For more information please visit randytravis.com.