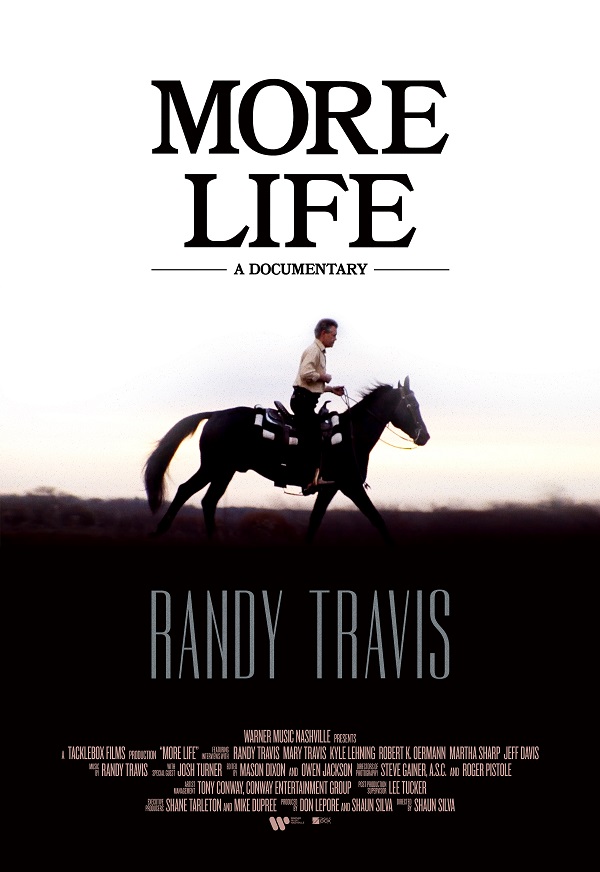 DRIVEN BY FAN DEMAND, RANDY TRAVIS’ “MORE LIFE” DOCUMENTARY TO BE PREMIERED ON YOUTUBE IN 7-PART SERIES AND AVAILABLE ON iTUNES

NASHVILLE, Tenn. (April 14, 2022) – Randy Travis’ “More Life” documentary was so highly praised when it premiered on Circle Network that the fans demanded more ways to view it. Travis, Warner Music Nashville and YouTube have teamed up to bring the critically acclaimed film to the platform in a seven-part series beginning today and rolling out every two weeks until July 7. Be sure to subscribe to the Country Music Hall of Famer’s YouTube channel to catch every episode. Additionally, the full documentary is now available for purchase on iTunes. Both links here: https://wmna.sh/morelife.

“More Life” started as an intimate concert special in 2011 to honor the 25th anniversary of Randy Travis’ iconic album Storms of Life. However, many didn’t know how important this documentary would become. As the film was being finalized in 2013, Randy unexpectedly became ill and suffered a massive stroke, making him unable to perform and severely limiting his speech due to aphasia. The film touches on his storied career, envelopes the final professionally filmed live performance from the man and inspires with his story of healing, redemption and faith. It was directed and produced by Shaun Silva and Tacklebox Films with WMN’s Shane Tarleton and Mike Dupree serving as executive producers.

With lifetime sales in excess of 25 million, Randy Travis is one of the biggest multi-genre record sellers of all time and a recent inductee into the Country Music Hall of Fame class of 2016. His honors include seven Grammy Awards, 11 Academy of Country Music statuettes, 10 American Music Awards, two People’s Choice awards, seven Music City News awards, eight Dove Awards from the Gospel Music Association and five Country Music Association honors. In addition, three of his performances earned CMA Song of the Year honors: “On the Other Hand” (1986), “Forever and Ever Amen” (1987) and “Three Wooden Crosses” (2002). To date, he has 23 No. 1 singles, 31 Top-10 smashes and more than 40 appearances in feature films and television shows to his credit. Four of his albums are Gold Records. Four are Platinum. One has gone Double Platinum. One is Triple Platinum and another is Quintuple Platinum. In 2004, Randy was honored with his own star in the Hollywood Walk of Fame and is honored on the Music City Walk of Fame in Nashville, TN. He has been a member of the cast of the Grand Ole Opry since 1986. In 2017, Randy was honored with a wax figure at Madame Tussauds™ Nashville. Since his near fatal stroke in 2013, with the help of his wife Mary and rigorous physical therapy, Randy continues to make improvements in his speaking, walking, and yes, singing. With the help of author Ken Abraham, he released his critically-acclaimed memoir in 2019, Forever and Ever, Amen. Today, Randy is looking forward to releasing the remastering of his historic debut album Storms Of Life (35th Anniversary Deluxe Edition) in September 2021. For more information please visit RandyTravis.com.