Does Ragtime have its flaws and moments of hard-to-believe-it’s? Well, Wag the Dog… did Dorothy make it to Oz?

Pasadena, CA (The Hollywood Times)2/17/19 – Ragtime – one of America’s great musicals – has boldly sailed onto the Pasadena Playhouse stage with landmark import aimed directly at her community’s heart. The prologue introduces the characters of this 21-person cast (originally 48) and 16-piece orchestra that accompany them on the 2 hour and 45 minute journey back to the early 1900’s (also known as the “American Century”) mixing fictional and factual characters like, Booker T. Washington, Harry Houdini, Evelyn Nesbit, Emma Goldman J.P. Morgan and more – who steer the plot forward.

It’s been over 20 years for an LA return since the 13 Tony Award nominated musical – (The book by Terrence McNally and the score by Stephen Flaherty and Lynn Ahrens received Tony Awards) including Best Musical – has been staged. Producing artistic director, Danny Feldman and the Playhouse have much to be proud of in their downsized but powerfully packed presentation of Ragtime: The Musical.

The story consists of three families at the turn of the 20th Century in pursuit of the American dream based on E.L. Doctorow’s sweeping historical novel. The three groups are: African Americans, represented by Coalhouse Walker Jr., a Harlem musician – upper-class Caucasian suburbanites represented by Mother, the matriarch of a white upper-class family in New Rochelle, New York and Eastern European immigrants, represented by Tateh, a Jewish immigrant from Latvia.

Does Ragtime have its flaws and moments of hard-to-believe-it’s? Well, Wag The Dog did Dorothy make it to Oz? 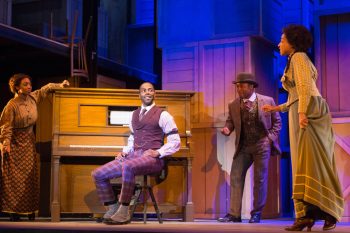 Hiring Emmy-award winning writer/director and creator of Frasier David Lee is sheer genius. Lee has a cast that works together as a single body with a tortured, angry yet harmonious and hopeful mind. The actors make the moments that aren’t put to words into gestures that stir the soul – like when Mother (Shannon Warne) – realizes her marriage to Father is over – it’s her gasp and hand movements that show her agony. Or when Coalhouse Walker, Jr. (Clifton Duncan) sees his baby boy for the first time and lifts him from his cradle – we feel his shift from sleep-around musician to proud father determined to change and fight for his love, Sarah (Bryce Charles). Or when the magnetic Tateh (Marc Ginsburg) ferociously shields his young daughter from danger and sickness – we feel the depths of his despair of being an immigrant promised the good life only to find the separations that come with his struggles to succeed in the land of the free… the land of brave…

Not lost in the sign above the cast of immigrants behind a chained fence looking into America is that Prosperity has only the letters that spell: Property alit amongst the crowd.

Awaiting the lights to dim – the stage settings about to become alive – is the bare essence of design and atmosphere is always a magical time. As Ragtime opens… you’ll see things that aren’t really there (like the sea, rain or snow) or be transported (by train, ship, or car) in time and place by this phenomenal design team: scenic design by Tom Buderwitz; costume design by Kate Bergh; lighting design by Jared A. Sayeg; sound design by Philip G. Allen; projection design by Hana Sooyeon Kim, and wig and hair design by Carol Doran and the many behind-the-scenes artists who make things happen.

The actors all play multiple roles and are directed in a seamless stream of revealing new information while asking us to rethink: Is this a “dated” musical or just another part of today’s headlines? Asking us to look at where we’ve come and how far we’ve still got to go. It may be difficult to fathom a terrified young black woman who buries her newly born child and flees, then I reminded myself I was in the theatre where belief is to be suspended and alternately it hit me that while glancing at my phone after the show – far more incredulous events happen that we so do not want to believe.

Quote from the Playhouse: Director David Lee said, “The themes of the show are more relevant than ever.  Set in the first years of the 20th Century, it deals with immigration, racism, white privilege, women’s’ rights, workers’ rights, violence in the name of justice, media’s outsize influence on our democracy, inter-sectional politics and even the clash between fact and fiction in reporting our history.

It was written in the last years of the 20th century to remind us that those elements of the earlier American experiment were still being wrestled with, and offer some clarity and hope of survival for our country and its promise.

And now, 20 years later, we are dealing with the same themes.  I’m passionate about the piece, not only because I believe it is masterful, but because I don’t feel I’m alone in needing clarity and a whiff of hope.”

Do not miss this stunning show with choreography by Mark Esposito and musical direction and conducting by Darryl Archibald. The ensemble in the Vaudeville number is a sexy treat and visual delightful.

The child actors aren’t cutesy they believably portray the innocence yet intelligence of youth in confused and troubled times… like today yet different clothes.

The last revival was in New York – maybe New York needs revisiting since the 90’s!