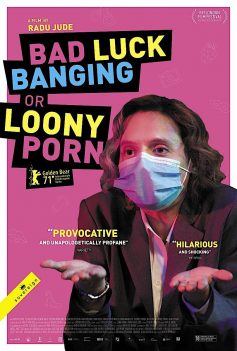 Emi Cilibiu (played by Katia Pascariu), a history teacher at a prominent Romanian secondary school, films a sex video with her husband Eugen, in which they engage in some graphic sexual activities. Eugen uploads the video to a private fetish site, from which it is downloaded and repeatedly posted to public porn sites. The exact circumstances of how the sex video got uploaded to the Internet are a bit unclear, but the movie is concerned with whether Emi will lose her teaching job over the video. The entire film takes place in the lead-up to her inquisition by a group of parents of the students at the secondary school.  But all this is a means to an end ­– that of showing the contradictions and hypocrisies of Romanian society.

The staff at Emi’s school, as well as the parents of her students, are scandalized by her behavior in the video and they call her to a parent-teacher conference in the evening on a day soon after the video is widely circulated. In the first part of the film Emi spends the day before the conference running various errands and growing increasingly frustrated at the sexist, nationalist, and consumerist aspects of Romanian society, as well as the additional social stressors imposed by the effects of the COVID-19 pandemic. We follow Emi around Bucharest along streets heavy with auto traffic. The camera seems to be a character of its own, looking at details in the city and often focusing on signage around the city on walls and shops.

The camera follows Emi and then moves away to look at ordinary people as they move around on the city’s sidewalks, many with COVID masks, some without, all busy with their daily lives and routines. Emi visited the house of one concerned parent, bringing flowers as a standard visitor gift – while she keeps checking with her husband via cellphone on whether the sex video has taken down or not. Nearly all of the people Emi interacts with are oblivious to the effect that the video has had on her reputation and professional status as a teacher.

Sometimes, people are seen up close, as with the woman who looks right into the camera and invites the audience to eat her out (was this scripted, or simply an incident that occurred while filming in public?) or a pedestrian who’s seen berating a motorist who nearly ran him over at a crosswalk and demanding that he go ahead and finish the job. There are also many moments when the camera moves away from ground level entirely and prowls up the face of a storefront or apartment building, showing us the architecture. This might be a comment on the anonymity of big city life, or it might be that the camera operator just likes showing us the architecture. This is a film about discoveries rather than statements, with the camera following people and then abandoning them to seek insight elsewhere, by looking into things rather than merely looking at them.

Part 2 of the film constitutes a major shift to a montage, depicting the director’s definitions or thoughts on various related concepts or objects – presented in alphabetical order (given Romanian spelling, of course). Some observations are humorous (for social distancing, a clip of a traditional Romanian folk dance modified to comply with distance regulations is shown), some are more bitter. For the French Revolution and the Romanian Revolution, violent scenes from the events are depicted followed by shots of commercial products named after the events). Some pieces are outright caustic: For efficiency, a 24/7 funeral home is shown, open and attracting a long line, directly opposite a hospital, presumably one that houses coronavirus patients. A few of the definitions involve depictions of graphic nudity or un-simulated sex acts – which given the context are also quite funny.

After finished the A to Z of his montage, Radu Jude returns us to Part 3 of the film where Emi arrives at the parent-teacher conference, where she is informed by a sympathetic administrator (Claudia Ieremia) that the parents and teachers will be voting on whether or not the school should continue to employ her in light of her supposed “moral transgression.” The hearing, which is conducted with appropriate social distancing because the film was shot on real locations during the peak of the COVID-19 pandemic. If a majority votes against her, she will be expected to resign. The parents, among them a retired Romanian Army lieutenant, a jet pilot with fascist political leanings, a socially conservative priest, a “nice guy” who defends Emi in an attempt to ingratiate himself to her, and a woman Mrs. Lucia (Olimpia Mälai) who has previously offered bribes to Emi in exchange for higher grades for her child, are generally critical of Emi’s actions. In condemning Emi’s behavior and teaching style, the parents express vulgar and sexist attitudes towards women, Romaphobia (fear of Roma or gypsies), anti-Semitism, and question historical evidence Emi invokes to contradict their points.

Radu Jude satirizes Romanian society in a way that most American filmmakers are nervous about doing with American social and political pretensions.  We even get a jab at “fake news” on FOX News and the general anti-intellectualism of the anti-vaxxer movement in Europe and the USA. Emi the historian teacher is a very smart woman and knows her stuff. Some of the parents criticize her teaching of history in the way that the MAGA parents complain in the USA about the curriculum in the public schools. But she has the last word – even on Romania’s most revered national poet Mihai Eminescu when she recites one of his lesser-known bawdy poems that is outright pornographic. Radu Jude had captured this strange world in which we live today. We need more filmmakers like him.