Beverly Hills, CA (The Hollywood Times) 9/14/18 – In the midst of finding out there will be a second season of the popular “The Marvelous Mrs. Maisel,” Rachel Brosnahan has announced she will be executive producing her own project.  The series “Femme” will be based on the short film of the same name; it’s currently making the rounds on the festival circuit. 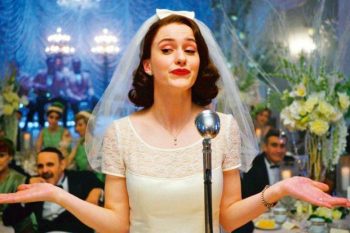 Ms Brosnahan also executive produced the short; it hits queer streaming service Revry on September 21st, for those who want a preview of what’s to come.  It was directed by Alden Peters, written by Corey Camperchioli, and additional producers included Benno Rosenwald of Mooki Entertainment, Johan Matton, and Linnea Larsdotter of Changing Film Productions.  It was awarded “Best Coming of Age Short” at it’s premiere at Wicked Queer, The Boston LGBT Film Festival back in March, and has since screened at over 20 festivals, and scheduled to appear at 11 more over the fall season.

It’s a coming-of-age comedy set in Hell’s Kitchen; main character Carson (Camperchioli) is navigating an existential crisis during which he must confront deeply ingrained ideas of masculinity and gender identity.

“After the beautifully positive response to Femme the film, I am thrilled to continue the Femme journey with the fiercely talented Corey Camperchioli,” said Brosnahan. “His singular and powerful voice is an important part of a new generation of barrier breaking storytellers and I’m proud to collaborate with him.”

“At the end of Season 1, we left Midge in a pretty triumphant moment,” she said. “She’s finally arrived into Mrs. Maisel, the stand-up comedienne and I can’t say a whole lot about where she’ll head in Season 2, but good things can’t last long.”

She was also asked if she’d ever be brave enough to, like her character, try out an open mike.  Her confidence apparently ends there.   “I can’t imagine anything braver and I am not that brave,” she told the audience. “I think we discussed it very briefly early on. Amy had said that — when we were in rehearsals — that she would write something for me and shove me out on the stage and I think I ran the other way, as fast as I possibly could.”

Brosnahan credits amazing writing for her own success in the show.  “Thankfully, the writing is — as you said — so brilliant, so sharp, so smart and I’ve had a lot of help from these guys in finding the timing in that, as well.”

She did reveal that she’d spent “hours and hours and hours” watching burgeoning comics try out their new material, live.  Evidently, it was research that worked for her.

Perhaps the most profound question, and revealing answer, of the panel was how success has changed her.  With an Emmy nomination, an executive producership, and principal roles in House of Cards and The Marvelous Mrs Maisel, she does not appear to be anything less than perfectly grounded.

“You know, I get asked that a lot, and I never really have a good answer, because the truth is, it doesn’t feel like a whole lot’s changed.”