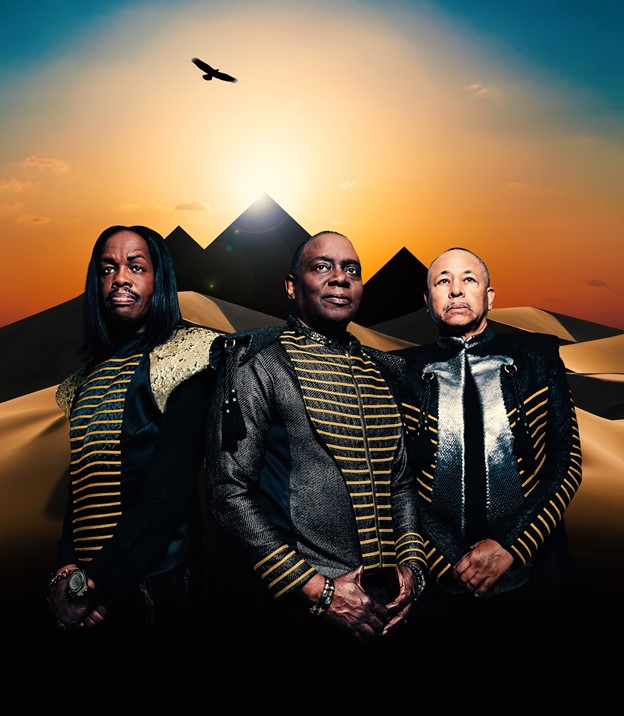 This year, guests will be treated to an outdoor celebration, safely socially distanced, headlined by the legendary Earth, Wind & Fire.

The renowned band will rock the bowl with a full set and help raise funds and awareness for multiple sclerosis, this life-altering autoimmune disease.  There will also be a Spring/Summer 2021 runway show from Hollywood-favorite fashion brand alice + olivia by Stacey Bendet.

“We are so thrilled to be returning to the Rose Bowl Stadium for a second time, and can’t wait for a fun night of dancing under the stars with Earth, Wind & Fire,” said Davis.  “We were over-whelmed by the support and enthusiasm from our guests last year, despite these challenging times, and are looking forward to another memorable event, as we come together to learn more about this devastating disease and raise money to find a cure for MS.” – Founder, Nancy Davis

Tickets and additional information about the Drive-In to Erase MS are available at driveintoerasems.org. 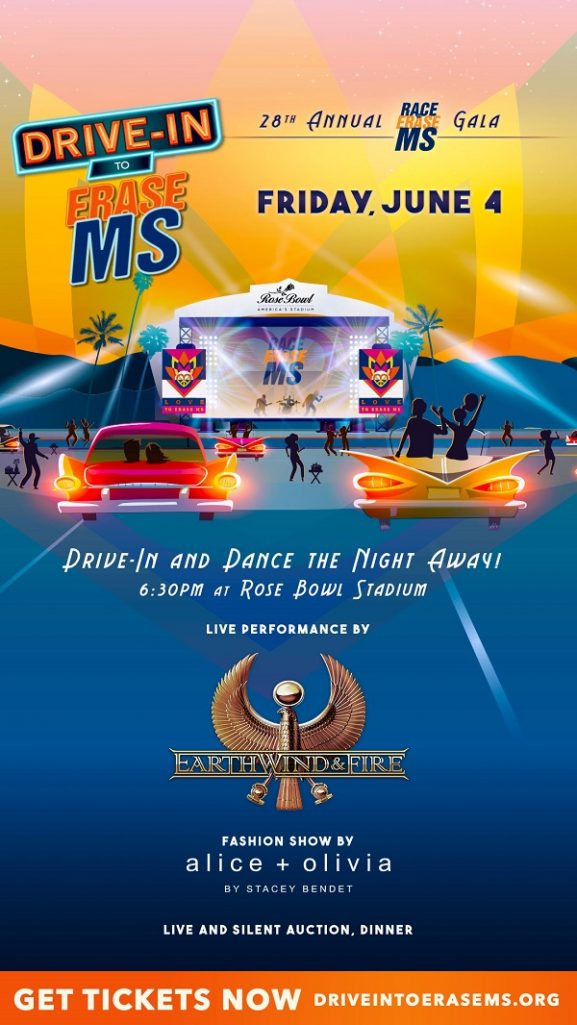 Funding research is the core focus of the Race To Erase MS Foundation, and all funds raised support our Center Without Walls program, a selected network of the nation’s top MS research centers. This nationwide collaboration of physicians and scientists are on the cutting-edge of innovative research programs, working as a team on therapeutic approaches to eradicate MS.

To purchase tickets and for full details regarding logistics and safety precautions can be found here: https://www.driveintoerasems.org/

Safety for guests, talent, crew and staff is of the utmost importance. The venue and production company are following the strictest guidelines implemented by all local and state health standards and safety regulations. At present time, all guests are required to stay in their car to enjoy the show and updates will be made as the event draws closer to the date.

The Race to Erase MS is honored by the gracious design contribution of Shepard Fairey and Studio Number One for their design that has been incorporated into the invite concept. Inspired by his wife Amanda, who suffers from MS, Shepard Fairey’s exclusive design is meant to give hope that soon there will be a cure! The invitation concept for the June 4th event was created by Ali Ambrosi Creative and integrated Shepard Fairey / Studio Number One’s design.

Earth, Wind & Fire are a music institution. 2020 marked a year-long celebration of their 50th anniversary in entertainment that has taken them all around the globe playing sold out concerts. In 2019 their contributions to arts and culture was acknowledged in Washington DC with the prestigious Kennedy Center Honors. The Smithsonian National Portrait Gallery also awarded Earth, Wind & Fire with its Portrait of a Nation Prize.

In 1969, music legend Maurice White birthed the music force named after the elements from his very own astrological charts. With soul as deep as the plant, Earth, Wind & Fire charted a history that will live on forever.

They’ve scored eight number one hits and have sold over 100 million albums worldwide. They’ve released 23 albums. Eight of those albums went Double Platinum and hit the Top 10, making them one of the best-selling artists of all time. They’ve won an impressive nine Grammy Awards including one for Lifetime Achievement (2012). In 2000, Earth, Wind & Fire was inducted into the Rock and Roll Hall of Fame, cementing their lasting impact on popular music.

For their record-breaking success, they’ve also been awarded with Lifetime Achievement honors from ASCAP, NAACP, BET, and have a star on the Hollywood Walk of Fame. Their reach extends to heads-of-state. They have been invited to perform for Presidents Bill Clinton and Barack Obama, who said in an interview with Rolling Stone that Earth, Wind & Fire was a “rhythm and blues and pop staple.”

With timeless songs and commitment to spreading positivity, Earth, Wind & Fire has consistently made music that has bridged the gap among all generations and nationalities. With a sound that blends funk, jazz, pop, soul, and R&B, Earth, Wind & Fire launched a musical genre that can’t be confined to a specific label except their own. From the funky and infectious “Let’s Groove” to the timeless dance classic “September” to the heartfelt “Reasons,” Earth, Wind & Fire’s catalog of hits has become the soundtrack to many lives; now, then and forever.

They continue to influence musicians from all generations and genres. Music giants Michael Jackson, Stevie Wonder and Prince have studied and hailed their artistry. While many of today’s chart-topping artists including Lenny Kravitz, Pharrell, Justin Timberlake, Kendrick Lamar, Chance the Rapper, and Solange have declared themselves super fans. Alicia Keys has called Earth, Wind & Fire “the best band ever” and Mary J. Blige showed her love by recording their song “Imagination.” And the band shared the stage with Black Eyed Peas performing on the half-time show at Super Bowl XX1X.

Their achievements are equally matched by their generosity. Over the years the band has supported various charity organizations including the Make a Wish Foundation, Race to Erase MS, the American Cancer Society, and the Human Society. In 2007, leader Philip Bailey founded Music Is Unity, which helps youth in foster care successfully transition into adulthood and provides music instruments to youth with musical aspirations but lacking the resources. Co- founder, Verdine White has led important initiatives with the Girls & Boys Club of America and opened The Verdine White Foundation in Los Angeles as a mecca to serve youth with music scholarships and other programs.

The music of Earth, Wind & Fire is more alive than ever as they continue to inspire new audiences and thrill those who have been with them from the beginning. Like the elements in their name, Earth, Wind & Fire’s music has withstood ever-changing trends in the world and shows no sign of vanishing as they continue to create joy and uplifting music that will forever reach a sacred universal atmosphere.

The 2020 Drive-In To Erase MS event raised over $1.4 Million to benefit the Race to Erase MS and its Center Without Walls program, a collaboration of top MS research centers working together as a team on ground-breaking research with the goal of treating and, ultimately, finding a cure for MS.  The event honored Davis’s son Jason, who passed away in February of 2020, with a very special posthumous “Medal of Hope.”

Race to Erase MS was founded in 1993 by Nancy Davis and is dedicated to the treatment and ultimate cure of multiple sclerosis. Race to Erase MS is dedicated to the treatment and ultimate cure for MS.  Funding research is the core focus of the foundation and significant strides have been made to find the cause and cure of this debilitating disease. At the event’s inception 27 years ago, the absence of medications and therapies encouraged its involvement; the Race has been instrumental in funding pilot studies that have contributed to drugs now on the market and other very important therapies that are improving the lives of people suffering from MS.

All funds raised support the Center Without Walls program, a unique collaboration of the world’s leading MS research scientists currently representing Harvard, Yale, Cedars Sinai, University of Southern California, Oregon Health Science University, UC San Francisco, Johns Hopkins, and UCLA. This nationwide collaboration of physicians, scientists and clinicians are on the cutting-edge of innovative research and therapeutic approaches to treat MS.  It is the hope of the Race to Erase MS that in addition to combating MS through research in a clinical environment, awareness will be created by educating the public about this mysterious disease.  Since its founding, Race to Erase MS has raised over $50 Million.

For the latest news and information on Race to Erase MS be sure to follow on social, and join the conversation using #RaceToEraseMS and #EraseMS.