Los Angeles, CA (The Hollywood Times) 5/5/20 –  Known as the “SFK Queen of Confidence”, Serena’s overtly confident persona evolved into the “Queen of Confidence” several years ago – a symbol for all women that stands for authenticity, sexual freedom and loving oneself unapologetically. Now, this NYC native has became the Queen of Quarantine and made her dreams a reality in more ways than one by creating two new Instagram Live shows that have been making a huge buzz ‘Quarantinis with SFK’ and ‘Lets F*ucking Date.’

You are a creative genius. How did you build your brand?

Thank you! My brand originated from a persona I created when I was a freshman at Duke University. I told everyone I had changed my middle name to “Fucking” and everyone knew me as SFK, who was a superhero version of myself that made me feel powerful. She was extra, larger than life, and was unapologetically herself. She helped me project an image of confidence out into the world and strangely enough, it worked. As my platform grew and I began seeing how my words empowered others, I started looking for ways to extend my impact. Years later, the SFK persona developed into a brand that represents body positivity, sexual freedom, and being unapologetically in love with yourself.

Tell about what it took to build your brand, “SFK, the Queen of Confidence.”

I started working at Refinery29 in the video department soon after I graduated from college. I began to grow a substantial following on Instagram, which led me to look into brand partnerships as a way to make extra money. I realized that it was difficult to explain what “SFK” was… I wasn’t a food, beauty or fashion influencer—I didn’t fit into a category, so then why would a brand want to work with me and why would anyone want to follow me if I wasn’t an “expert” in something? I was just Serena “Fucking” Kerrigan, but that was partly because I never sought out to be an influencer. In fact, since I first picked up a camera as a freshman in high school, my dream was to be a filmmaker and create stories for women. I did it while I was at Duke, as a Visual Media Studies and English major, and in high school, I made several short films with female protagonists. I always wanted to create video content, so landing a job at Refinery29 was a dream because I got to do just that.

My brand started to take shape when I created and hosted Taboo, a video series for R29’s Snapchat Discover channel, created to break the stigma surrounding certain topics that are traditionally considered off-limits. From abortion to masturbation, I wanted to create a safe space for people to share their experiences. Throughout producing over 70 episodes of this show, I interviewed hundreds of people about topics that can be very difficult and scary to discuss. I was able to connect with strangers instantly and convince them to be vulnerable (when many of them had never even been on camera before.) It was an incredible exercise where I empowered people to feel confident to share their stories without shame. That’s when I realized my gift of making people feel like they can truly be themselves.

Soon after, I wrote “Queen of Confidence” on my Instagram bio and established to the world (and myself) that confidence was my niche. It’s very important to define what your brand is. It took me years to figure out how to turn a persona I created in college into a brand that would help others. In an oversaturated social media world, I noticed that the most successful influencers and content creators are raw, authentic and an expert in their field, even if it’s super-specific. I realized that because I was someone who went from being very insecure and self-conscious to unapologetically in love with herself, confidence could be my niche. Social media is all about access and the most successful influencers are the ones who bare to show it all. This was difficult for me at first, because being vulnerable is very scary. However, the more I did it, the more receptive my audience was because they could see that my confidence wasn’t just aspirational, it was attainable. Everyone, from every gender, race, ethnicity, and social class needs confidence. Everyone needs to love themselves. So, it’s my mission to make sure that they get there.

What do you love the most about social media?

Social media has truly helped my confidence. Since I was a little girl, I primarily absorbed images a whitewashed cis-gendered abled-bodied version of what women should look like from the male gaze. I remember seeing the Glossier body wash campaign on Instagram, which celebrated real women with real bodies and it helped me embrace my own. Alternatively, social media can make someone very insecure. The downside is that it’s a highlight reel and it’s easy to fall into the trap that one’s worth is attributed to a number. To stay focused, I stopped looking at my follower count and focused on the community I was building online. Comparison is the thief of joy, so work on what you have control over.

You launched two new Instagram Live shows that have been making a huge buzz ‘Quarantinis with SFK’ and ‘Lets F*cking Date.’ Share your thought process behind them.

I was on the Live team during my first two years at Refinery29, so I have a ton of experience producing and hosting live content. When quarantine started, I felt super isolated in my NYC apartment, so I started going live for fun (and to combat loneliness!) Eventually, Quarantinis with SFK became a daily show that provided a necessary release to blow off steam from the anxiety caused by the pandemic. The live format lets me present a more raw, unfiltered side of me to my audience, where I dance, drink, and discuss my search for a #coronaboyfriend. I’m told that my followers feel like they are literally sitting on the couch with their best friend. It’s a fun time!

I also created the live series, Let’s Fucking Date, after I wrote an article for Refinery29 about the anxiety of being single during the quarantine. I realized that if there is a good time to date, albeit virtually, it is actually now. The show airs every Friday at 8:30ET/5:30PT live on my Instagram and has really taken off. 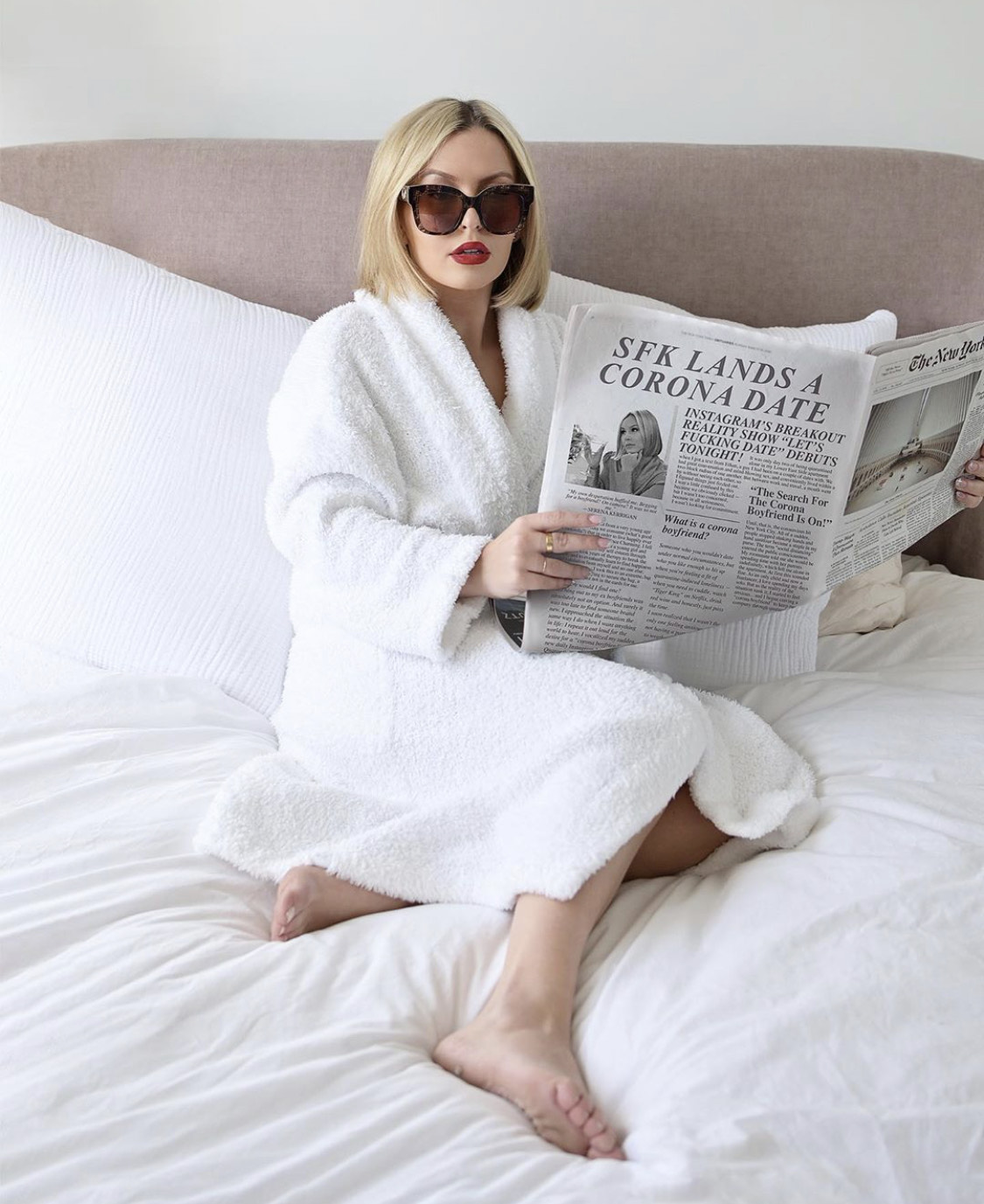 How do you prep for your quarantine dates?

Other than my makeup routine, I intentionally try not to prepare at all. My fans and friends submit eligible bachelors through email and my producer vets the best option, to ensure that the date is completely blind. I literally never know who is going to be on the other side of the screen, but that’s what makes it so exhilarating! Pre-quarantine, I would usually stalk a date’s social media, which left with preconceived notions about who they were. Alternatively, with my show, I enter without any information or bias, so I can experience it with an open mind and a genuine curiosity to get to know them.

Even though I am going on a date in front of thousands of people, I think the success of the show is the fact that it’s a live format, which makes it feel like a real date. The lack of editing, gimmicks, and inauthenticity you typically see from dating shows is completely absent. The unpredictability and awkwardness is what you would experience on a date IRL. That, along with the live commentary from the audience makes the show the most entertaining thing you could watch on a Friday night in quarantine.

Have you found a potential love interest during quarantine with any of the men who appeared on your show?

There have been a couple of men who I’ve continued the conversation with outside of the show, but I’m not one to settle 😉

Besides online dating and furthering your brand, what other activities have you done during quarantine?

I attempted to make banana bread and documented the entire experience. While it was a total train wreck, it was incredibly fulfilling to push myself outside of my comfort zone.

I’m Latina! My mom is from Buenos Aires and my whole side of the family lives there. I speak Spanish fluently and feel very very connected to that part of my identity.

I currently have a TV show in development that we plan to bring to market this year. Honestly, I’m not trying to plan too much. I just try to take things day by day and live in the moment because life is incredibly unpredictable.