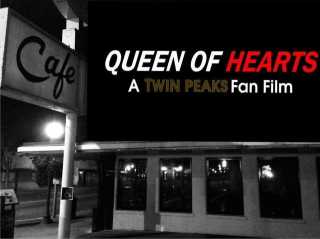 Hollywood, CA (The Hollywood Times) 01-13-2019- ‘Twin Peaks was an important show for me when I was a young teenager. It showed me a world that was rarely spoken about and where intuition was just as important as knowing facts,’ says Cameron Cloutier, the writer/director/producer of Queen Of Hearts, a film that revolves around the character of Annie Blackburn. Other notables that appear are Windom and Caroline Earle, as well as Dale Cooper ( all of them are characters in the original TV series directed by the man who needs no introduction- David Lynch).

Twin Peaks is an American mystery horror drama television series created by Mark Frost and David Lynch that premiered on April 8, 1990, on ABC. It was one of the top-rated series of 1990, but declining ratings led to its cancellation after its second season in 1991. It nonetheless gained a cult following and has been referenced in a wide variety of media. In subsequent years, Twin Peaks has often been listed among the greatest television series of all time.

While Cameron’s story will most likely never be considered canon by David Lynch and Mark Frost, it can easily be placed within the guidelines they set up in all three seasons, as well as The Final Dossier.

Cameron runs a very popular Twin Peaks video podcast on the Obnoxious and Anonymous Youtube channel and he’s been flirting recently with the idea of finally making his Twin Peaks fan film.

‘Over the last several months I’ve seen a number of other Twin Peaks related fan films and I honestly really like what I’ve seen. However in viewing these materials, it brought back a hunger that I’ve been quietly wanting to satisfy for 25 years now—and no, a Snickers bar is not going to work this time,’ he says.

Charlotte: In Queen of Hearts: A Twin Peaks Fan Film, are you going to try to wrap up the series or leave it open ended as it is now?

Cameron: I don’t think Twin Peaks is something that will ever truly end-at least, not in my mind. However, yes, the film does have an ending-but it does not attempt to conclude the series as a whole, nor will it try to purposely leave audiences frustrated.

Charlotte: Is Queen of Hearts: A Twin Peaks Fan Film going to be as weird as the actual series?

Cameron: The film I’m making will stay true to the characters, but it will not go out of it’s way to just be strange, weird or surreal. Sure, there will be moments, but the last thing I want is for people to think I’m merely copying David Lynch. It will be its own thing, but completely respectful to everything that’s come before.

Twin Peaks is a whole different world that was masterfully created by, and this is an occasion I’m not hesitating to use words such as ‘genius’ and ‘legend’, David Lynch. The reason behind its cult status is that there is nothing quite like it out there and it’s been a predecessor of many great shows such as X-Files and The Killing.

To those who are welcoming to new interpretations I can tell that it really is an exciting project to look forward to. And to those who aren’t I would suggest to look at it as a tribute to the masterpiece that we all love, to the Universe that’s both beautiful and strange…