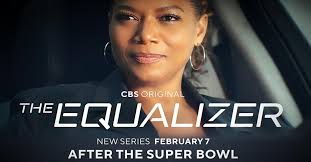 The latest iteration of the Robin Hood vigilante franchise premiers this Sunday after the Superbowl.

Hollywood, CA (The Hollywood Times) 02/05/2021 – At a time when relations between law enforcement and the public are tense, The Equalizer delivers a timely plotline. In this latest iteration of the 1980s CBS police thriller turned-Denzel Washington 2014 blockbuster, Queen Latifah stars as Robyn McCall, an ex-CIA officer, super-agent, and mother, who will go above and beyond the capabilities of law enforcement to protect the downtrodden and mete out justice.

The pilot episode, which airs on CBS this Sunday directly after the Superbowl, begins with our protagonist battling night terrors and the demands of her angsty teenage daughter, Delilah (Laya DeLeon Hayes). Enter her old boss, William (Chris North), who offers McCall a lucrative position in his private security firm. McCall, jaded from a botched operation in Venezuela, declines the offer. When William tries to entice her to ‘get back onto the old chessboard’, McCall responds, “Everybody’s playing chess. Nobody’s thinking about the living, breathing pieces we sacrifice along the way.” McCall doesn’t want to be someone’s chess piece anymore. She wants to rescue the pawns before they become victims.

Enter the episode’s pawn. A young waitress named June witnesses a murder and is then framed for it. McCall rescues the young woman from a close encounter with some tough henchman. NYPD is after June, along with a shadowy cabal of mercenaries with paramilitary training. But Robyn knows the girl is innocent. To get to the bottom of the mystery, McCall enlists the help of some scrappy old pals whose skills are as unmatched as hers: Hacker extraordinaire Harry (Adam Goldberg), and his wife Melody (Liza Lapira), a sniper-turned-bartender. Their expert detective work leads them to a high-profile inventor and tech executive who will stop at nothing to ensure his misdeeds are protected.

The spunk and attitude Latifah brings to her character makes Robyn McCall an appealing enforcer. The brisk pace at which McCall and her team move through the case keeps things fun throughout. While The Equalizer may feel like a typical primetime police procedural, it seems to have something more to say about the state of American society than others.

Towards the end of the episode, McCall drives her daughter Delilah, who nearly had a brush-up with the law, to a prison, to teach her a lesson. “The world is just looking to find a reason to put a young Black girl like you on the other side of that fence,” McCall tells her Delilah. The two make a deal: Delilah will volunteer to teach at the prison’s literacy program as penance for her wayward behavior.

When asked to describe her character in an interview, Queen Latifah, who also is one of the show’s executive producers, said, “[McCall] is done working for the people who make high decisions…She’s done with the greed. She’s done with the uber-powerful. She is all about taking what she has learned through the years…and using it for everybody. Using it for the 99 percent of the population who don’t have access to people like her…”

Andrew W. Marlowe, the show’s co-creator and co-executive producer, said, “we’re living in difficult times, and it’s a time when people don’t trust the institutions that are supposed to protect and defend them…This is why the show is so exciting for us, because when the cops can’t help and the courts can’t help, who do you go to?”

Latifah, Marlowe, and company hope viewers will get used to answering that question with Robyn McCall. Maybe, Latifah’s McCall is just the kind of enforcer that Americans are yearning for.

The Equalizer premieres on CBS on Sunday, February 7 after the Superbowl.

Women of Country Music Come to the Grammy Museum in New Exhibit “The Power of Women in Country Music” Starts Friday, May 27