Los Angeles, CA (The Hollywood Times) 9/27/2018 – “Thank you all for being part of this night and for being part of a big and loving musical family where I always feel at home.”  Quincy Jones told the audience at Microsoft Theater on Tuesday night.

Quincy Jones, who turned 85 this past March 14th was honored by long-time friends (singers and celebrities) during a taping of a celebration concert called Q85: A Musical Celebration for Quincy Jones, which honored the life and legacy of the Grammy Award-winning producer. The show will be aired on BET, but the air date has yet to be announced.

Celebrities that showed up were Oprah Winfrey, who sat in the front row next to Q for most of the show and surprise guest Dave Chappelle, who told some great jokes and introduced some really talented musicians. 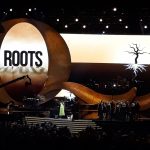 Danny Glover took the stage to talk about his time he spent on the making of Roots and introduced Yolanda Adams. WOW what an amazing voice and performance.

LL Cool J and Ludacris said some wonderful things about Q and what he has done for their career.

Will Smith, via a televised segment told about how he met Q and how he got the chance to do an audition on the spot for The Fresh Prince role.

Quincy Jones daughter, actress Rashida Jones took the stage and told her Dad “both you and my Mom taught me like it says in the Wiz, home is a place where love is overflowing, so we are going to end this celebration with a moving song called “Home.”

“For everything you brought and taught us, so have a happy, happy, happy birthday and many many, many more because I know you have more to teach us!” Gladys Knight said as she closed the show.

This was a great show, with wonderful sets onstage with exceptional talent. The song choices for the singers was amazing.  Keep an eye open for this upcoming musical special on BET.