Photos by The Hollywood Times and SkyPark where indicated

The route we took was the 210 East to 330 North. This sure is the best way to head up to the mountains.  It was a smooth ride and traffic was not bad at all. Blue sky and clouds above, wonderful. We got there around 11:30 a.m. and there sure was a great deal of trucks and cars with bike racks.  I understand it is a great place to ride mountain bikes.

Once parked you will see the main entrance to start your day of adventures and Pumpkins. 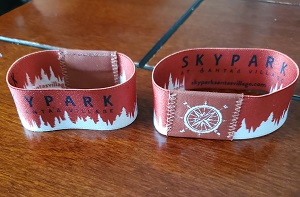 SkyPark at Santa’s Village has a “waiver station” to the right of the main building with three computers to fill out info about yourself.  Once you are done answering a few questions and reading all the rules, regulations and liabilities, a small printout will pop out and you take that to the main entrance to meet the wonderful and helpful staff.  We checked in as media guest and each of us where given a cool looking wristband to wear for our day in the park.  A blowup scarecrow greeted us, a picture to take and then through the door we all went. 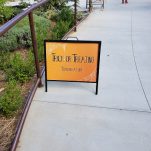 There were lots of pumpkins and fall decorations throughout the park.  It was also a pumpkin patch where all the pumpkins had a price written on the bottom for you to purchase to take home to paint on and closer to Halloween so you can carve.

The first thing we decided to do is get some lunch, so this way we could walk it off!  My son Billy looked at the different restaurants so we could decide what we wanted to eat.  The first stop was St. Nick’s Patio and Grille to have soup in a sourdough bread bowl. Really good, the kids got burgers and chili fries.  They all really enjoyed the food.

I headed up to Billy’s BBQ House, because of the name, same as my son!  I had tri tip with mashed potatoes, red beans and rice. OMG! That tri tip was so tasty and BBQ to perfection. The mashed potatoes where yummy and those red beans and rice, like being in New Orleans. They had macaroni and cheese, veggies, corn on the cob and green salad as sides. My other son Jesse went over to The Pedal Pub to get a crafty brew and then went to “The Lunch Box” for a sandwich.

Now we were ready to go to Sky Pavilion to see the Puppet Show for little 3 year old grandson Max to enjoy.  It was the Tale of Sleepy Hollow.  Some kids seemed to be a little afraid but it was great to see a live puppet show, so don’t forget to catch one of the several shows as well as a magic show.

Next to the Sky Pavilion was the Chapel of the Little Shephard, which was constructed in 1955 and has been beautifully restored for visitors and the occasional wedding.  As a well as a place for reflection and prayer year round, you’ll love the Nativity Scene during Christmas time.

What a wonderful Chapel for a wedding, it might be the right place when he pops the question and puts a ring on my finger!

Here are photos provided by Brad Lofland, Assistant General Manager from SkyPark at Santa’s Village and they are beautiful, now I really want to get married there!

Our next adventure took us to Discovery Playscape so Max could go through the obstacle courses with a swing zipline, playhouses, musical instruments and test his balance on a spider’s web just his size.  He had a blast!

Next was Santa’s Toy Test Track.  Max picked the Tonka dump truck to start his adventure and after the helpful and friendly Santa’s toy maker told Max all about safety and how to operate the battery operated truck, he was off on the test track.  They also have a roller skating rink, but none of us had the guts to put on a pair, but next time we will make the time.  So great fun for those who like to roller skate.

Off to Floki’s Frozen Falls Climbing Tower:  We were not sure if Max would even try it, but to our surprise he was ready to put on the harness and start his climb.  He did pretty good and seemed to freeze when he realized how high he had gotten and sorta froze until mom instructed him how to let go and push off to get down. He ended up climbing a couple of times since there were no kids in line at that time.

He had a great time and at the exit was a pair of token operated dirt scoopers that attracted my two sons, so they went and got a few tokens so Max could try it out with dad’s help.  It didn’t take long for both of my sons to give it a try.  Love that they have a “Peter Pan” soul. 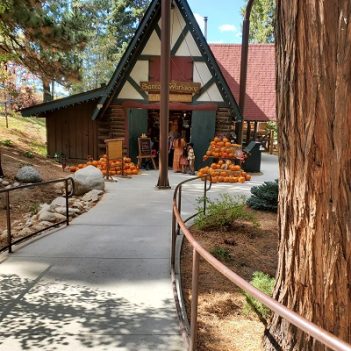 Max spotted some painted pumpkins so we headed over to Santa’s Workshop and there were several kids in there painting pumpkins that they purchased. Once they were finished with their masterpiece, they could leave it there until they were ready to go home.  It was now time for something hot to drink and something sweet to eat. We headed to The Gingerbread House Bakery & Sweet Shoppe for that special treat and the Christmas Coachworks for some hot cider and even some chili, which was so delicious.

Max saw some really cool small bikes and off to the Balance Trail. This trail takes kids on an easy first step to learning how to ride a pedal bike, powered only by foot propulsion.  Riding on a balance bike gives young explorers the chance to learn the fundamentals of balance and steering in a safe and fun environment.  Max did really well, but always wanting to stay off the trail!

After that experience his mom saw another bike track so off they went. This one had battery-operated bikes.  Max needed to put on elbow pads, knee and chin split pads and of course a helmet, which he found too big for him but had to put it on!  Mom had to go along with him because he didn’t seem to be getting the hang of it, but it didn’t take long for him to take off all my himself.  Here is a video of him going along the trail and coming into home base.

My sons noticed a sign about Royal Games and off we went to check it out. The first adventure was Princess Evergreen’s Archery Range. How cool was that, so we got our right size bow and about 6 arrows.  Even Max had one small bow with rubber suction cup arrows.  There were cardboard pumpkins on the round haystacks for us to use as target practice.  We all had a great time. If there is no one in line, you can ask for more arrows and that would have been awesome for us, but when we were finished with our 6 arrows, there was a line so we had to hand in our bows.  We were not able to take photos since we were all busy shooting our arrows and some of us hit the pumpkins and hay bales.  Max was getting a lesson from mom and notice the other grandson Drew was taking a couple of arrows from mom, sneaky, but he had the right idea. I reached out to Brad once again to get some photos of the archery, because you really need to be able to see the Archery Range.

Next door was Northwoods Sharpshooter Gallery and we all had to try it out. We were given safety goggles and instructions for another friendly staff member.  Max had a great time with grandma and then mom came in to join the fun with Max and dad too!

Great shootin’ indeed. One more adventure to go that we were all excited about, King Celwyn’s Ax Challenge.  But little Max was too young for this one.  We all had our try at it and my grandson Drew (13) hit the target about 5 times and his Uncle Jesse hit it about 3 times as well as his Mom and Dad.  I was not able to make the ax stick, but it was fun trying.

It was now 4:00 p.m. and the Trick or Treat had started at 3, so we decided it was time to start that. So grandma was going to take Max Trick or Treating while dad, mom and brother Drew went to rent mountain bikes to take their chance at the Bike Park.  The trail network winds through a thick canopy of pine trees and sports several well marked, directional mountain bike trails for the beginner to advanced rider.

Here are some amazing photos of bike riders and professional riders on the bike trails –  courtesy of SkyPark. On Sunday, October 30, there will be a Mountain Biker Costume Parade and contest at 1 p.m.

Once they were off, Max, Uncle Jesse and grandma headed to all the shops and restaurants to Trick or Treat.

Max sure had fun saying Trick or Treat and even Thank you.  It was a great warm up to when the big day comes on October 31st, Halloween. While waiting for the rest of the group to finish the bike ride, we ran into some characters in costume, Arrow the mascot, “Pumpkins in The Pine” mascot and Mr. Scarecrow. Max went over to greet them and pictures were taken.

We then noticed that there was a line at Santa’s House & North Pole and we went over to see what was up. There was a really nice women dressed in a cool pumpkin/elf costume and she was talking to all the kids there. Once it was our turn, we went in and there he was, the one and only Santa Claus with his big smile and wonderful beard. Max ran over to give him a hug. They also take pictures so you can purchase them on the way out. They scan your wristband, which is way cool. What a way to end the day for Max. He had a great time as we all did.

The three bikers made it back and enjoyed themselves but admitted that they weren’t expecting what the trail brought them, but they made it without falling or any harm done and apparently Drew was hooked and had a fantastic time and couldn’t stop talking about it.  Awesome family time.  A must for all the families to bring the kids and grandparents out.

This is what my daughter-in-law Raquel had to say about her day: “Pumpkins in the Pines was a fun experience all the way around. From the delicious food, fun activities for the whole family and even the bike trails. We all really enjoyed the ax throwing, rifle shooting and archery.  My toddler even tried the rock climbing wall and especially enjoyed the kids mini bike trial while my teenager loved exploring the mountain bike trails!  All in all, it was a fun day spent with the family and another place to add to the list of activity filled placed the whole family can enjoy.”

I agree with Raquel 100% and we look forward to coming back next month to preview the Santa’s Village events for the winter.

We met Brad on the way out to tell him thank you and each of us told him about how much fun we had at the park.

They even offer full hook-ups for RVs! That is a great way to spend the weekend up in Lake Arrowhead at SkyPark at Santa’s Village.

Here is their website to find out all about “Pumpkins in The Pines” and everything you need to know about SkyPark at Santa’s Village.