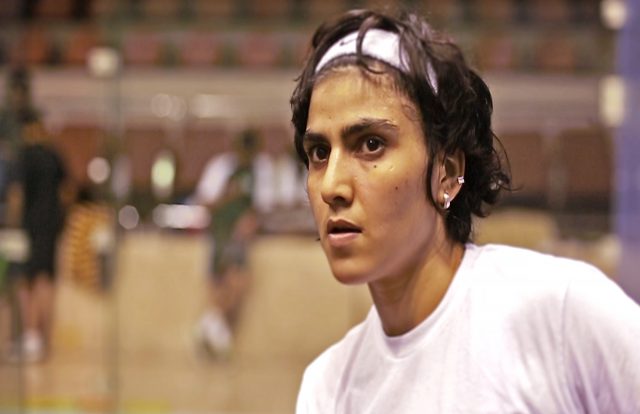 Next Monday, July 23rd – The War to Be Her and Beatrice

A Young Female Athlete Fends Off the Taliban in The War to Be Her; Documentary showcasing faith and family to have national television broadcast debut next Monday, July 23, 2018 on POV

“Director Erin Heidenreich captures both the peril and the perseverance of an athlete who dares to defy those who seek to contain her.” – Frameline

NEW YORK – In “one of the most dangerous places on earth,” where the Taliban maintains a substantial presence, a young woman faces obstacles to pursuing a seemingly simple passion: sports. Born and raised in Pakistan’s mountainous tribal region of Waziristan, Maria Toorpakai emerged to become the country’s top female squash player and one of the top 50 in the world.

Yet she has had to hide her talents from the Taliban, which is strongly—and violently—opposed to women in sports. From a young age, she disguised herself as a boy, going by the name Genghis Khan, so she could play, only to eventually be plagued by death threats from the radical group.

Directed by Erin Heidenreich, The War to Be Her premiered at the 2016 Toronto International Film Festival and makes its national broadcast on the PBS documentary series POV and pov.org on Monday, July 23 at 10 p.m. POV is American television’s longest-running documentary series now in its 31st season.

Told from Maria’s point of view, the documentary intercuts interviews with establishing shots and news footage that set the tone for this brave young woman’s story.

She adds, “Playing sports is an extreme act. I broke all the laws and God helped me in that.”

In an early scene, Maria looks at photos of her younger self—often dressed in typically masculine clothes—and recounts her early struggles.

“I wanted to play outside with boys, running around freely. I didn’t want to just sit at one place for hours and hours and playing with dolls at home. So I took all my clothes outside, my frocks, my girly dresses, I took them all outside and burned them.”

As Maria’s body started to develop, however, it became obvious she was a girl and the Taliban came after her. For her own safety, she stopped playing squash from age 16 to 19. But she continued to play in her bedroom, against the wall.

Maria never gave up on her dream and she sent emails to squash coaches and organizations every day searching for an ally who would help. Former world champion Jonathan Power is one of those she contacted. Eventually, she moved to Canada and trained at the National Squash Academy in Toronto. Power became her coach.

“Since I moved to Canada, my squash improved a lot,” Maria says.

While living in Canada, Maria stays in touch with her close-knit family, which includes her mother, older sister (a Pakistani politician representing a tribal region), four brothers and her equally rebellious father, Shamsul.

Throughout the film, Maria pays tribute to her parents, recounting their own personal paths, work for their communities, and their views about women’s education, the importance of women in politics, and of course the contribution of women to global sports, each of which have put them at significant risk.

The War to Be Her is Heidenreich’s directorial debut.

Heidenreich says: “When I was filming in the Tribal Areas of Pakistan, Maria brought girls to the squash court who were covered, shy and unsure of themselves. But when they began to play squash and picked up their rackets they hit with such strength that, for the first time, I felt the visceral sensation of what it means to truly see a girl become empowered. Playing and participating in games is natural to all kids. Allowing girls to fully posses their power within their bodies as well is a necessity.”

“This is a story that’s not only about Maria, but about all the things that her family members do to support her and that she in turn does to support them living in this extremely conservative society,” Heidenreich says.

“The thing that I really hope to achieve with this film is that when people connect with Maria and her family, they can meet a family that is guided by their faith in Islam,” she adds. “They are led by their faith that is only to do good and to do right in the world and to help people out. And I think that on a basic level, we just don’t see enough of that in the world.”

“In a time when women’s and gender rights are at the forefront of global discussion, The War to Be Her is a timely testament to the tenacity and talent of girls and women everywhere,” said Justine Nagan, executive producer/executive director of POV/American Documentary. “On top of that, director Erin Heidenreich captures a loving and caring family committed to their faith and their daughter’s dreams. As a window for millions of Americans into other parts of the world, it’s important that POV showcases these positive, empowering stories.”

About the Filmmaker: Erin Heidenreich, Director
Erin Heidenreich’s feature directorial documentary debut, The War to Be Her, premiered at the 2016 Toronto International Film Festival and garnered awards at film festivals around the world. She directed & produced the award-winning short documentary, Rising Sons, and supports other female-driven narratives and filmmakers by producing The Other Shore, Made in India and Mission Congo.

Previously, Erin co-founded the film consultancy, Cinetic Media, in NYC working on such films as Little Miss Sunshine, Napoleon Dynamite and Bowling for Columbine. She then moved to a small town in China igniting many years of living abroad, a passion for telling unconventional stories about gender stereotypes, and following a heart-centered curiosity to some of the most dangerous places on earth. Originally from a small town in Wisconsin, Erin is a graduate of Northwestern University and currently lives in Los Angeles.

Direted by Lorena Alvorado, Beatrice is about Beatrice Vio cultivated a passion for fencing when she was five years old. At 11, she contracted severe meningitis. In the hospital, the doctors gave her an unimaginable choice: Keep her limbs and risk death, or amputate all four to ensure survival. She chose life. Now, Vio is a Paralympic champion and the only fencer in the world who competes without arms or legs.

Produced by American Documentary, Inc., POV is public television’s premier showcase for nonfiction films. Since 1988, POV has been the home for the world’s boldest contemporary filmmakers, celebrating intriguing personal stories that spark conversation and inspire action. Always an innovator, POV discovers fresh new voices and creates interactive experiences that shine a light on social issues and elevate the art of storytelling. With our documentary broadcasts, original online programming and dynamic community engagement campaigns, we are committed to supporting films that capture the imagination and present diverse perspectives.

POV’s Community Engagement and Education team works with educators, community organizations and PBS stations to present more than 800 free screenings every year. In addition, we distribute free discussion guides and standards-aligned lesson plans for each of our films. With our community partners, we inspire dialogue around the most important social issues of our time.

Since 1994, POV Spark has driven new storytelling initiatives and interactive production for POV. The department has continually experimented with web-based documentaries, producing PBS’ first program website and the first Snapchat-native documentary. It has won major awards for its work, including a Webby Award and over 19 nominations. Now with a singular focus on incubating and distributing interactive productions, POV Spark continues to explore the future of independent nonfiction media through its co-productions, acquisitions and the POV Labs, where media makers and technologists collaborate to reinvent storytelling forms.

American Documentary, Inc. (AmDoc) is a multimedia company dedicated to creating, identifying and presenting contemporary stories that express opinions and perspectives rarely featured in mainstream media outlets. AmDoc is a catalyst for public culture, developing collaborative strategic engagement activities around socially relevant content on television, online and in community settings. These activities are designed to trigger action, from dialogue and feedback to educational opportunities and community participation.