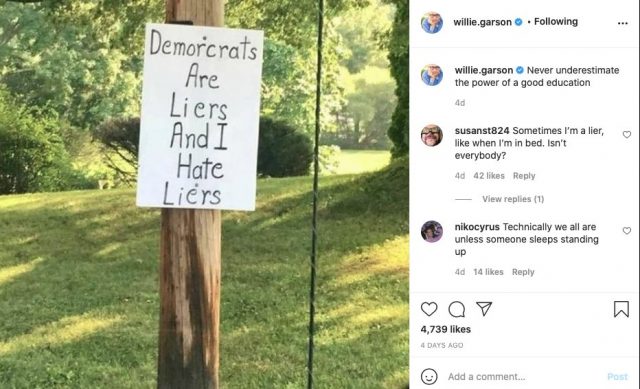 Palm Springs, CA (The Hollywood Times) 3/10/21 – You may be familiar with New Jersey-born actor, Willie Garson. Known as Mozzie in the USA Network’s, six-season, series, White Collar (2009 – 2014) with his partner in crime, Matt Bomer. Garson is a very accomplished actor with an extensive resume. I follow both on Instagram. 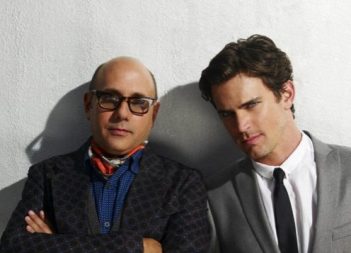 Garson recently made a post on his Instagram page concerning the misspellings on a handmade sign tacked to a telephone pole—clearly created by a hater of Democrats: Democrats Are Liers And I Hate Liers. I’m certain Mr. Garson didn’t have any ill-intentions in his introductory statement to the post: Never underestimate the power of a good education. I imagine he was being humorous as it was a jab at Republicans—assuredly, the one that made the sign—referring to the misspelling of liars and Democrats. I would have preferred he’d focused on the message and not the spelling, but it’s his Instagram page and not mine. Still, I imagine Mr. Garson saw the importance of the screaming message (false as it is concerning Democrats being liars as a whole)—a sign of the times in America and how that tacked sign relates to the state of affairs presently in this country, and certainly over the past four years while Trump was in the White House. 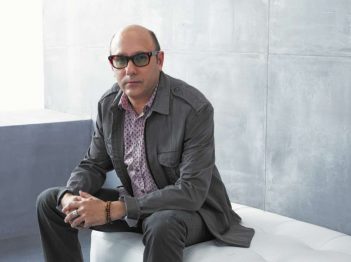 At the time I read the posted sign, the first thoughts that came to mind were of the gravity of the great divide in this country—which the sign in question is a glaring example of the ongoing rising tensions and hostility widening the disunity of Americans. I did make what I thought was a respectful and constructive comment on the post to offer a different perspective: We should be highly more concerned about the message, and give little concern—if any to the spelling. Not every adult (when they were children) had the luxury of a good education or parents that gave a damn. The same is true today as it has always been. There are many other factors that come into play such a (my bad—should have been as), poverty, the inequality of education throughout America, the cost of a college education, and more. The following day, I saw that my comment had been deleted. What I found troubling more than my comment being deleted was to date, 4749 liked-it, and 165 made a comment—childish and disrespectful ones at that. All but one person basically slung the mud using such words as ignorant, stupid, and dumb directed at the creator of the sign concerning his or her misspellings. That one person got the significance and ramifications of the sign that is actually twofold—a sad commentary of the mindset of many people, Democrats included. 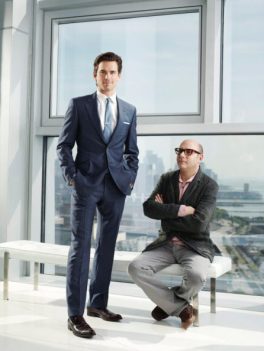 In her comment, cookinco22 showed common sense lacking in the others: Though, some people can have spelling issues and be quite smart and educated. Spelling is definitely not my dysgraphic son’s best skill. I take more issue of a Republican calling Democrats liars after 4 years of continual lies from the President. She touched on those two issues concerning the mudslinging comments: The message of the sign and the disrespect shown—Democrat hater or not—to people who deal with learning restraints. 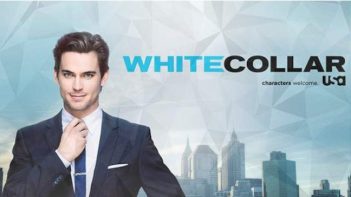 Although I agree with Mr. Garson on the importance of education, he did start a mudslide. I’m reminded of what my mother told me when she was insistent I go to college: Son, they can take everything away from you, but they can’t take that college education. To mention a few of those mudsling comments: wjrtn1, hilarious; pwell2020, Sadly most are proud of their stupidity; kimi.wiley, The stupidity with some ‘Americans; kacm516, As a former teacher I’d have taken a big old red marker to this thing; christinaerwin9866, Someone fell asleep during spelling class in grade school; mina.hobson, Some people are just ignorant; wanderingkristopher, That perfectly sums up Republicans; kevinsimmonsmead, But you have to admire their penmanship; total_janarchy, I hate bad spellers!; taglansou, the result of generational incest; mark_raphael, Republicans rode the short bus; carrottop925, If they don’t want to be called stupid, maybe they should not write or speak. 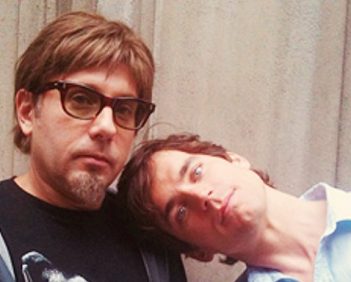 Although I don’t harbor any animosity for my comment being deleted because it could have been a mistake or done for any number of reasons. However, I do many of the insensitive comments for societal and personal reasons: Mark (mark_raphael), I didn’t ride the short bus to school as you stated the Republicans did, I walked. I have a serious case of dyslexia, a result of my father slamming my head against the wall one too many times when I was a kid in that hellhole of a home-life filled with abuse and violence. Even though I know the difference, at times, I get that and then mixed up. The same is true with: though thought, and through; where and were; there and their; your and you’re, and there are others. Again, I do know the difference but there is a disconnect between my brain and fingers. And yes, I graduated from a well-respected university. As a writer with dyslexia, writing can be extremely frustrating at times. Over the years, I’ve learned some tricks and editors are a blessing.

As far as the comment made by taglansou, on incest… well, all I can share is that the happiest day of my childhood was when I was 17—my hands covered in my father’s blood as it soaked into the knees of my jeans. And, total_janarchy, perhaps you might want to work on your hate issues. Focus on the real-life and death issues in America and the world. I can assure you, bad spelling isn’t one of them!

As cookinco22 touched on, and I did in my deleted comment, issues with spelling as other writing mishaps are not an indication someone is ignorant, stupid, or dumb. Such mistakes could be due to a number of reasons including confusion with proper pronunciation of certain words, the product of an inadequate education not always the fault of the child, problems in the home environment, and many others. There are days I can’t spell worth a damn because I stuttered as a kid, a byproduct of that abuse and violence. As a result, I occasionally have issues concerning proper pronunciation as well.

The only dumb people concerning Mr. Garson’s post are the ones that did the mudslinging in their comments. And, again, not focusing on the message. There has been enough mudslinging. America is overrun by the three cousins: hatred, racism, and intolerance. Let’s all of us wash our hands and get busy sending those three cousins on their way. In all honesty, as much as I respect Mr. Garson for his compassion and commitment to community and integrity, I do wish he had given more thought before he made that post. One thing Mr. Garson’s post proved is many Democrats can be nasty people like Republicans. Over the next four years, we have a chance to lead by example. Let’s do that. To Mr. Garson and all those who made some pretty shameful comments on his post: Although proper spelling is important, the lack of it is not going to be what ends our democracy or the world—it will be the message.