ON THIS DAY
Late night talker “The Joey Bishop Show” opened on ABC in 1967. Hosted by Joey Bishop and featuring Regis Philbin as the announcer/sidekick, the series was created to challenge “The Tonight Show Starring Johnny Carson” on NBC. It aired through Dec. 26, 1969…NBC detective drama “Remington Steele,” starring Pierce Brosnan and Stephanie Zimbalist, concluded in 1987…The Consumer News and Business Channel, better known as CNBC, launched in 1989…HBO medieval fantasy drama “Game of Thrones” premiered in 2011…In 2012, Sarah Michelle Gellar drama “Ringer” concluded after just one season on The CW. The series was originally planned for CBS…Celebrity Birthdays: Actress Christine Elise (“The Great Debaters”) is 52; Jennifer Garner (“Alias”) is 47; singer Victoria Beckham is 45.

-Did You Know?:
Sarah Michelle Gellar’s first regularly scheduled TV series was a syndicated daytime drama called “Swan’s Crossing.” It aired in the summer of 1992.

In series-premiere news, ABC sitcom “Bless This Mess” was moderately sampled with a second-place 3.1/ 5 in households at 9:30 p.m. Comparably, this was 19 percent above lead-in “black-ish” (#3: 2.6/ 4 at 9 p.m.) and 55 percent ahead of the season (or series) finale of “Splitting Up Together” one week earlier (2.0/ 3 on April 9). But, given the mountain of promotion coupled with most new series dropping 10 to 20 percent in week two, this is not really all that positive for “Bless This Mess.” Was I the only one watching and thinking this is a modern day version of “Green Acres”? The only character missing was Arnold the Pig! 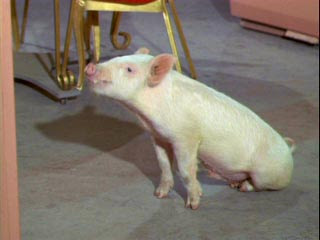 For the remainder of the analysis for Tuesday, April 16, click here

Weekly Ratings Scorecard:
What follows are the Live+Same Day rating results for the week of April 8. Change versus the comparable year-ago period appears in parentheses:

NBC Renews “Manifest” for Season 2
As expected, NBC has greenlit scripted drama “Manifest” for a second season, with an unconfirmed number of new episodes. The first season centered on the mysterious return offlight  828 and its passengers who went missing for five years and were pronounced dead. When the flight returned, the passengers hadn’t aged and had no indication any time had passed.

Current Monday 10 p.m. occupant “The Enemy Within,” which stepped in for “Manifest” following its first season-ender, has lost considerable steam in the traditional ratings (and is not expected back for season two).

Season 1 of “Manifest” (airing out of “The Voice”) averaged 12.6 million viewers and a 2.8 rating among adults 18-49, according to “live plus seven day” ratings from Nielsen Media Research. Comparably, that makes it the season’s No. 1 new scripted series in the demo.

Disney Channel Renews “Big Hero 6 The Series”
Disney Channel has ordered a third season of the Emmy Award-nominated animated “Big Hero 6 The Series” ahead of the season two premiere (on Monday, May 6 at 3:30 p.m. ET). Based on the feature film, “Big Hero 6 The Series” continues the adventures and friendship of 14-year-old tech genius Hiro, his compassionate, cutting-edge robot Baymax and their friends Wasabi, Honey Lemon, Go Go and Fred as they form the legendary superhero team Big Hero 6 and embark on high-tech adventures as they protect their city from an array of scientifically enhanced villains. In his normal day-to-day life, Hiro faces daunting academic challenges and social trials as the new prodigy at San Fransokyo Institute of Technology. Season two finds Hiro and the Big Hero 6 team in upgraded super suits as they take on a variety of innovative villains, bio-engineered monsters and high-tech robots.

The Daytime Emmy noms were announced on March 20, with “Days of Our Lives” leading all programs with 27. CBS leads all networks with 61 nominations. Amazon Prime Video tied Netflix for second this year with 49 noms apiece, followed by NBC (38), ABC (35) and PBS (31).

El Rey Network will premiere evening talk shows “The Chuey Martinez Show,” starring Chuey Martinez, and panel discussion show “El Rey Nation” on Thursday, May 2 at 10 p.m. ET and 10:30 p.m. ET, respectively, on El Rey Network.  “The Chuey Martinez Show” was created around East Los Angeles’ own Chuey Martinez, the Los Angeles TV/radio personality, who is known for his easygoing personality and being a pop culture junkie. This 30-minute evening-style talk show aims to celebrate all things music, gaming, art, culture, and entertainment along with a healthy smattering of off-the-wall comedy and irreverent skits.  “El Rey Nation Show,” is a 30-minute geek-fandom panel show and features a diverse ensemble of social media stars discussing and dissecting the worlds of gaming, film, and comic books.

New HGTV docuseries “Christina on the Coast,“ featuring Christina Anstead, will premiere on Thursday, May 23 at 9 p.m. ET. The series highlights Christina as she gives clients luxe spaces filled with distinctive design elements and cool SoCal style. Christina starts each episode cruising along the Pacific Coast Highway in a top-down convertible, celebrating a new life that started with her engagement and wedding to Ant Anstead, star of the MotorTrend series “Wheeler Dealers.” The series also features the couple’s search to find a perfect home for their growing family.

HBO comedy “Los Espookys” will open on Friday, June 14 at 11 p.m. ET. From Julio Torres and Ana Fabrega, alongside Fred Armisen and Lorne Michaels of “Saturday Night Live,” the primarily Spanish-language show follows a group of friends who turn their love for horror into a peculiar business, providing horror to those who need it, in a dreamy Latin American country where the strange and eerie are just part of daily life.

ON THE AIR TONIGHT
“The Amazing Race” opens a new season on CBS…Season finales: “Mysteries of the Museum” on Travel Channel; “The Magicians” on Syfy…For the listing of programming options for Wednesday, April 17, click here