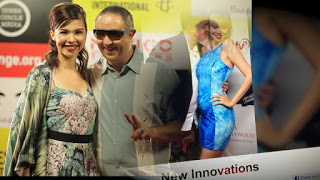 By Valerie Milano
Los Angeles, CA (The Hollywood Times) 7/26/20 – Producer Sean Waters (NBC/Universal Pictures) set to launch a number of new feature film projects that are set to shock audiences worldwide beginning in 2021. The projects are already in motion and with strategic studio partnerships, the projects will be released innovatively early next year (2021). Producer Sean Waters has years of innovative experience from American Idol to Investigative and eyewitness documentary style productions over the last 20 years.

Producer Sean Waters has an eye and flair for realistic film projects and credible acting and post work. Having been in Hurricane Katrina, Charley, Frances and even recently involved in documenting Black Lives Matter protests and COVID-19 chaos developing around the Country for the studios, Sean has a real artistic flair for realism in a film.

“Sean doesn’t do cookie cutter”, Megan Marie from LUCASFILM LTD. Promotions states regarding her long time mentor, “he will always come at you in a film and leave you breathless and wanting, um, needing more”.
Although Producer Sean Waters is a Development guy for NBC/Universal Pictures, the projects are likely not to go through the studios.  “I need to make sure these films stay in tact based on true events and realistic avenues”, Sean states, “studios tend to just want to throw in Angelina Jolie or Dwayne “The Rock” Johnson on a film, this is about new talent, new ideas, a new Hollywood”.
Actress and International Model Dana Waters additionally is signed onto the productions along with numerous film cast and crew from various studios and indie-backed production houses.
First up film titles:   “The Making”, “The Day the Sky Fell” and “Horrorwood” are all on deck to permanently disrupt the old Hollywood system and create a new reality in film making in a post COVID, more money-conscious shooting environment.   In short, these productions are what you want to get in on, private investors jumping into this new film style, film festival and distribution through on-demand create a win-win with the new strategies and leave slow, old Hollywood in the dust.
LINKS:
PRODUCER SEAN WATERS
https://pro.imdb.com/name/nm10003347?ref_=nv_mp_profile
ACTRESS DANA WATERS
https://pro.imdb.com/name/nm11733578/?ref_=instant_nm_1&q=dana%20waters
NFL PLAYOFF COMMERCIAL SPOT
https://www.youtube.com/watch?v=MJi9XWCDvpk