How did you start working in Film/TV?

Dane E. Connor: I had been wanting to pursue acting for a long time, eventually, my friend Kari Wuhrer, who has worked in the industry for many years, motivated me to finally move forward with it and was really influential in guiding me through some of the very beginning steps like finding a good acting school. I started taking acting classes and had a great acting teacher who taught me all the necessary skill sets and tools to navigate the industry and all of its nuances. I started going to auditions and booking some roles. From there I started getting opportunities for producing as well.

You are an Executive Producer for the new Michael and Sonny Mahal film, Attack of the Unknown. Tell us about the film. 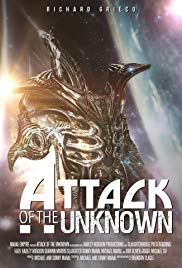 Dane E. Connor: Attack of the Unknown is written and directed by Brandon Slagle. It’s an excellent film about a SWAT team transporting a vicious crime syndicate boss that find themselves trapped inside a county detention center during a catastrophic alien invasion. The film stars Tara Reid, Richard Grieco, Robert LaSardo, and Roberta Sparta among others. The film is currently in Post-Production.

Dane E. Connor: I have had the privilege to work with Jozsef Gallai on a couple of projects. Written by Balint Szanto and Directed by Jozsef Gallai, The Surreal Project (2019), is a Horror/Mystery/Thriller about a family inheriting an ominous painting that soon becomes disturbed by a demonic presence known as The Whispering Man. The film will be distributed worldwide in summer 2020 as a UK/US/Hungarian Co-Production. The Surreal Project has already collected 8 festival nominations. Also Directed by Jozsef Gallai along with Gergo Elekes, the film Aftermath (2020), is a film about a young man waking up in a post-apocalyptic world, where he is targeted by mysterious strangers with a motive as unclear as is his way back home. Aftermath was filmed in an abandoned Hungarian town and is a US/UK/Hungarian Co-Production due out in February 2020.

You’re also working as an Associate Producer on the new film Nest of Vampires (2020). Tell us about that experience.

Dane E. Connor: Nest of Vampires (2020), follows an MI5 agent named Kit Valentine who travels from London to rural England in search of people who murdered his wife and kidnapped his only daughter, in the process uncovering a dangerous secret society who are deeply embroiled in human trafficking and Satanic cult worship. The film is written and directed by Chris Sanders. Chris is excellent to work with, he wrote a novel called The Thief’s Son which was a bestseller on Kindle, and Weiwei Si from James Bond film Skyfall (2012), Jack Ryan: Shadow Recruit (2014), and Wonder Woman (2017), bought a copy and they thereafter began collaborating on a screenplay about WWII Spy Robert Van Gulick. Really interesting stuff. Very happy to have Tom Fairfoot on board playing Kit Valentine as well, Tom worked alongside Richard Gere and Hillary Swank in the 2009 film Amelia.

You are an Associate Producer of the TV Series, Sweet and Sour Chicks, with Executive Producer Kiki Yeung. Tell us about the series.

Dane E. Connor: Yes, Kiki Yeung is the creator of the sold-out comedy show Crazy Woke Asians, which features many of the funniest stand-up, Asian comedians. The show has been featured in The Seattle Times, SD Union-Tribune, King 5 News, Asian Journal, and Next Shark). The show is also being Executive Produced by Takashi Cheng (Sick Girl starring Nina Dobrev), and it stars Kiki Yeung, Jimmy Shin (Wok of Shame on Amazon Prime), Christine Lin (The Great Leap at East West Players/Pasadena Playhouse). Sweet and Sour Chicks is currently in Post-Production.

Dane E. Connor: I have two new features in the works so far, one is a drama that takes place in a dystopian post-apocalyptic future that we are filming in New Mexico and the other is a period piece we are filming in Canada and also in parts of Prague. Both films have some great talent on board, very excited to start production on them.

I’m producing a 10 episode web-series that we will be filming in Los Angeles later this year. We’ll be starting the casting process in early 2020, so very excited to get started on that as well.