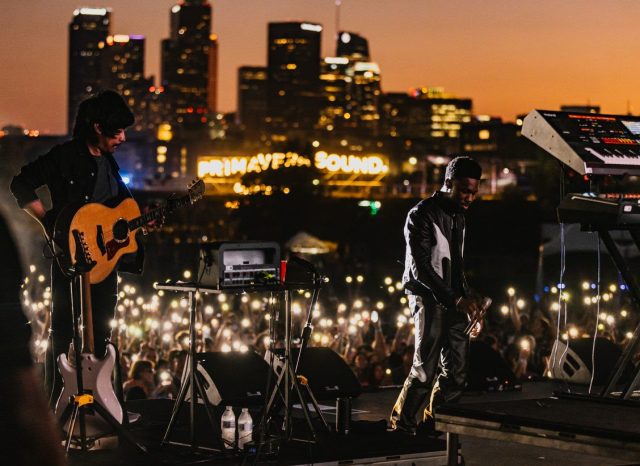 The credits are rolling and we fade to black, a Hollywood ending to our first edition in LA. The images were beautiful, tens of thousands coming together to dance for Primavera’s first ever festival in the Americas, framed by downtown LA’s iconic skyline. And what a soundtrack…

Whether it was LA’s Lights Down Low crew and Divino Niño opening the gates, Stereolab calling forth a perfect sunset, perennial Primavera faves Shellac showing why we love them so, transcendent rock from Current Joys, Lorde radiant, blonde and glowing from her time in the California sun, the jubilant dance party conjured up by Eris Drew and Octo Octa or the moody otherworldly guitars of Darkside closing out the night, Friday set the tone for what was to come, a weekend adventure through the sounds shaping the global sonic landscape.

To see so many new faces dance under the lights of Primavera Sound in LA was magical. All told, more than 50,000 came from over 50 countries to join 65 artists for Primavera Sound’s debut American road trip, your smiles and diversity, your refusal to be normal, all a testament to why Primavera prioritizes sustainability, gender and racial equality wherever we are in the world.

Earlier in the day Kim Gordon snarled and stalked reminding us of her eternal powers, DJ Playero held down a reggaeton dance party, Chilean hip-hop star Paloma Mami blossomed, Fontaines D.C. showed us their Irish post-punk magic, Warpaint were wonderful, there was an immeasurably funky sunset from Khruangbin and a poignant moment from hometown heroes Surf Curse who recalled how they used to be those ‘guys with guitars’ wandering the State Historic Park.

On our final day, Primavera Label’s Nuria Graham welcomed the early arrivals, followed by Puerto Rican duo Buscabulla. There was charging pub rock from Amyl and The Sniffers, a raucous girl in red crowd surfing into the night, and surely no one better to guide us into our final evening than the dreamy pop of Cigarettes After Sex. Arca captivated and provoked in equal measure, while Helena Hauff and Jeff Mills raised tempos. But Sunday was of course for the monkeys, the resplendent UK rockers Arctic Monkeys, closing the festival and showing their stardom remains essential to an entirely new generation of fans.

This weekend was the start of Primavera Sound’s great adventure in Los Angeles, and like any good Hollywood story, it will be continued! This really was just the beginning.

Honoring Hollywood tradition we want to thank everyone who played their part. Our incredible fans, who came from far and wide to dance and sing with us, the artists who soundtracked our LA debut so joyously, our partners and the behind-the-scenes teams who worked tirelessly to produce such a seamless experience and of course our new host city, the always glamorous, Los Angeles.