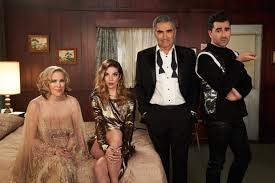 “With a global pandemic, severe economic strife, the gut-punches of racism and police brutality proverbially hitting us all—this might not seem like the right time for fluffy showbiz awards,” said GALECA President Diane Anderson-Minshall, CEO and Editorial Director of Pride Media (The Advocate, Out, Pride, Plus). “But it may be more important than ever now to embrace and champion quality stories and push the real Hollywood’s entitled writers, producers, executives and PR reps out of their bubble and into truly reflecting America’s diversity for a change. They have so much power, and entertainment journalism groups like GALECA can make them accountable.”

Added GALECA Executive Director John Griffiths, “Stereotypical, or worse, depictions of LGBTQs and People of Color have greatly contributed to the pain America is in right now. GALECA and its partner organization CGEM: Critics Groups for Equality in Media are determined to press media companies to take more responsibility and hire more underrepresented voices, voices that might say, ‘Hey, why, in 2020, is every single character on this show white, rich and straight except for the token Black, Indigenous, Latinx, Asian and/or Queer baddie or comic foil?’”

One series that definitely breaks the mold is CBS All Access’ The Good Fight, the tense, socially relevant and increasingly inventive drama set at a Black-run law firm in Chicago. Fight is up for Best TV Drama (as well as Best Unsung TV Show) alongside Netflix’s ever-polished Brit royals opus The Crown and tricky-couple crime drama Ozark, and two other twisty morality tales, AMC networks’ Killing Eve and Better Call Saul.

In addition to Creek — a previous Dorian Award winner when GALECA combined its film and TV kudos in one package — the Best TV Comedy contenders include three past Dorian Award nominees: Insecure (HBO), Better Things (FX) and The Good Place (NBC). Competing against them are Netflix’s gallows-humored, female-powered mystery-comedy Dead to Me (stars Christina Applegate and Linda Cardellini vie for Best TV Performance — Actress) and FX’s bloody-fun vampire comedy, What We Do in the Shadows (which counts two additional nods).

Although the miniseries Hollywood, from bad boy producer Ryan Murphy, didn’t make that short list, it did nab four acting nominations as well as ones for LGBTQ Show of the Year and Visually Striking Show. Other cinematic eye-fillers in the latter race include the likes of Disney+’s The Mandalorian and HBO’s Westworld.

And no Dorian Awards list would be complete without GALECA’s trademark category, Campiest TV Show. Vying for that cheeky honor are Hulu’s royal romp The Great, perennial members favorite RuPaul’s Drag Race (VH1), and Netflix hmmm-inducers AJ and the Queen, Dolly Parton’s Heartstrings and a certain expose of some exotic Oklahomans and Floridians, Tiger King: Murder, Mayhem and Madness.

“We’re again proud of our members’ eclectic choices,” said Executive Director Griffiths. But he noted that GALECA, with 20 percent of its membership female and about 16 percent Indigenous or People of Color, itself needs to bolster its diversity. “America is more than 50-percent women, and BIPOC unite to make up about 40 percent of the country, so we have some work to do,” said Griffiths, adding that the Society does include a “strong” 5 percent of transgender members. “Our Board has been discussing actionable-now steps to bolster representation of People of Color, women, trans, non-binary and genderqueer professional journalists in our ranks — for the vital big picture and to make our Dorian Awards as rich and reflective of the LGBTQ eye as possible.”

Added Griffiths, “GALECA is an all-volunteer group in a very rocky media landscape, exacerbated not just by the COVID fallout but by anti-freelancers legislation like California’s AB-5 bill. So we urge engaged entertainment writers to get in touch with us. Numbers are what raise a voice.”

Via its original banner Gay and Lesbian Entertainment Critics Association, GALECA’s Dorian Awards have gone to the best of all of film and TV — not only LGBTQ-themed — since 2010. While this year marks the inaugural Dorian TV Awards, this is actually the 11th go-around for members voting on their best-loved TV programs and stars. Come first-quarter 2021, the Society will add to its choices for the finest in theatrical releases for the first separate Dorian Film Awards.

TV winners will be announced August 21, when the Society will also name the recipient of its first “You Deserve an Award!” Award, going to what the group deems “a uniquely talented TV icon (they) adore.”

GALECA: The Society of LGBTQ Entertainment Critics’ Dorian Awards, started in 2009, go to both mainstream and LGBTQ-centric content, helping remind bullies, bigots and at-risk youth that the world has a history of looking to “the Q eye” for tips on what’s great across all of entertainment. After all, how would the world fare without knowing what’s campy? A nonprofit professional organization, GALECA consists of over 260 active critics and journalists who write for legitimate media outlets in the United States, Canada, Australia and the U.K.  Visit GALECA.org for more info, and support us @DorianAwards on Twitter and Facebook and @Dorian_Awards on Instagram.

Dead to Me (Netflix)

What We Do in the Shadows (FX)

Christina Applegate, Dead to Me (Netflix)

Linda Cardellini, Dead to Me (Netflix)

Harvey Guillén, What We Do in the Shadows (FX)

Visible: Out on Television (Apple TV+)

What We Do in the Shadows (FX)

AJ and the Queen (Netflix)

(Honoring a performer, writer or commentator whose observations both challenge and amuse)