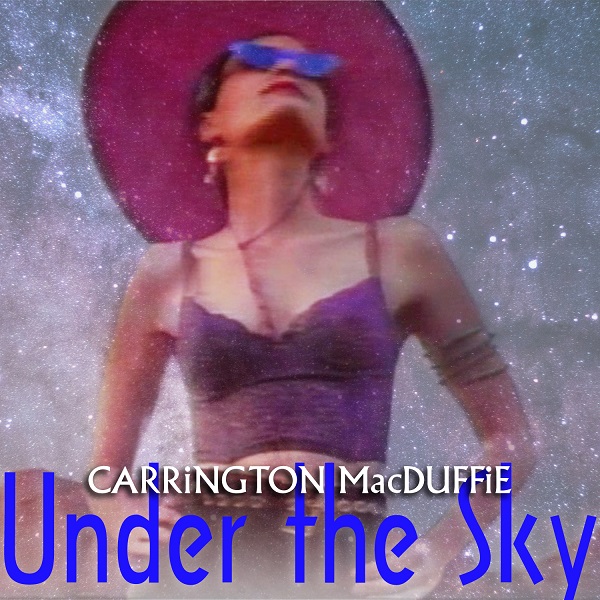 Single Premiered by THE HOLLYWOOD TIMES

AUSTIN, Texas – Eclectic Indie singer-songwriter CARRiNGTON MacDUFFiE signals to the moon and stars with the release of her latest single, “Under The Sky.” MacDUFFIiE’s cosmic lyrics are able to bring fans into a celestial state of being through vivid imagery and delicate tones. The tune refers to the sky as a roof over our heads and paints the picture of being out in the great unknown, being called to the atmosphere with the stars, wind, and sky. MacDUFFiE has the ability to create a freeing feeling that is present throughout all of her music. The imagination and artistry that radiates in “Under The Sky” takes listeners on a transformative journey of emotion, passion and liberation. “Under The Sky” is being premiered on THE HOLLYWOOD TIMES and is available to download and stream on all digital platforms now!

“I wrote this song when I was spending a lot of time in the desert, where you’re completely exposed to the sky,” shares MacDUFFiE. “I felt in direct dialogue with the natural world, with the Milky Way itself, and the song became a transmittal of that experience. There’s a feeling of mounting change in the lyric, and despite the dreaminess of the instrumentation, the drums at the end become very dynamic and seem to me to announce change as well, the way thunder announces a storm.”

The Hollywood Times had a Zoom interview to talk about her latest single release “Under The Sky.”  Enjoy the conversation.

MacDuffie continues to give us inspirational music that will make you get up off the couch and want to be Under The Sky instead of under the roof!  The music found in this new song will also bring a smile to your face and get your body moving, with the drums towards the end, Awesome!  Don’t miss your opportunity to get this new single today and the upcoming album on June 18.  Judy Shields, The Hollywood Times

MacDUFFiE is showing no signs of slowing down as she has been diligently working in the studio to record new music for fans to enjoy. “Under The Sky” is just a glimpse of the magic present in her upcoming album out June 18. As venues begin to reopen, MacDuFFiE is ready to share her energy with her fans and showcase her unique spirit on a stage near you. MacDUFFiE’s ongoing passion for the world around her manifests beautifully into this lovely tune, keeping fans on their toes for everything she has planned for the upcoming months!

About CARRiNGTON MacDUFFiE:
Far-reaching influences of a lively musical childhood weave through Carrington’s unusual, hook-laden songs, and stand out in her new LP, Sweet Little Mystery. The spirit of independence runs deep in her lineage as well as in her music, with her forebears having fought in the American Revolution. This maverick spirit ignites Carrington’s journey and calling in life.

A native New Yorker, Carrington’s love for music was sparked in early childhood while listening, dancing and singing to the records that her dad, a huge music aficionado, was spinning — Teddy Wilson, Beethoven, Herb Alpert, Hudson River folk, Scottish marches, exotic World, classic rock, and the Beatles, among many other artists. She went on to study at Johns Hopkins, Harvard, and Boston University, where she earned a Bachelor’s degree in English.

As a voice actor, Carrington served for several years as the voice of Ancestry.com, and she has narrated over 250 audiobooks, including biographies of Joni Mitchell, Pussy Riot, and Jack Kerouac. She has also voiced various video game characters, most notably a shamanic Scottish dwarf in World of Warcraft.

MacDuffie has performed throughout the United Kingdom, Germany, Holland, Belgium, and France, where she played at the popular club Belushi’s in Paris. Highlights in the UK have included shows and festivals in London, Bristol, Bath, Brighton, Manchester, Newcastle, Llandudno, Glasgow, Edinburgh, and Inverness.

In the spring of 2021, MacDuffie released her single Baby Played Me, and she currently has recording projects underway in Austin, Nashville, New York, and Glasgow. The music video for the title track of her new LP Sweet Little Mystery has received over a quarter million views on YouTube.

Whether making music, voicing works of literature, training in small plane piloting, or savoring the zen-like concentration of target shooting, she is led by her passion for creativity, and, of course, independence. “I think the purpose of life is joy,” says Carrington. “I see the world as one big art happening, and I love participating in it”.