Los Angeles, CA (The Hollywood Times) 11/19/21 – One of the films that graced the AFI Film Festival last weekend is Prayers for the Stolen (Mexico, 2021), a blistering film by Tatiana Huezo in her fiction debut. Prayers for the Stolen is a long-in-the-works adaptation of Jennifer Clement’s celebrated 2014 novel Noche de fuego. This is the tale of a slender, but close, family unit, which intersects with a broader social world of frayed community ties. Nodding to the sweeping structure of a novel (although this film is a fairly free adaptation of its source text), our point-of-view character is Ana – played at ages eight and 14 by Ana Cristina Ordóñez González and Marya Membreño, respectively – who lives out an intrepid existence in a mountainous part of northern Mexico. But this is a combustible part of the country close to the border, where a mysterious but terrifying drug cartel is engaged in an armed conflict with the federal police (or Federales), whose work is bathed in corruption itself. Prayers for the Stolen just screened at the AFI Film Festival in Los Angeles and is Mexico’s submission for Best International Feature film at the 94th Academy Awards in 2022.

Huezo transports viewers to a part of the world where mortal danger literally hangs in the air every single day. Prayers for the Stolen takes place in a Mexican village that has essentially been destroyed by cartels. The young men know they will eventually work for the cartels and it’s worse for the young women. Girls are often kidnapped in the middle of the night, and forced to be slaves for the crime lords. Mothers shave the hair of their daughters to make them look less feminine from a distance and dig holes in which to bury them when the danger draws too close. Meanwhile many of the men and older boys who are largely absent from the village work at a local mine and on a highway construction project in the mountains. There are some amazing scenes of the dust-covered faces and the collapsing rock cliffs caused by hollowing out of a new road with controlled explosions; the special effects depicting these are magnificent and hint yet again at the fact that this is a challenging place for a vulnerable young person to grow up.

In keeping with actual journalistic revelations from the country, the cartel is also engaging in the sex trafficking of young girls as a facet of their criminal empire – this also being a tactical ploy to scare the local population into complying with their presence in the community. Although Huezo is able to capture much of the texture of everyday life, this issue grows into Prayers for the Stolen’s main narrative thrust: That being Ana’s safety, alongside her two close friends Maria and Paula, from this awful danger. Ana is raised by her sole parent Rita (Marya Batalla) and, in one of the film’s most symbolic scenes, accompanies her to the hairdresser to shave away her silky, flowing hair. The guardians of these kids are desperate, and if giving them androgynous appearances in any way mitigates a threat.

Around the age of eight, three girlfriends, led by Ana (Ana Cristina Ordóñez González), spend time breaking into the homes of the disappeared, trying on their clothes and makeup. Ana’s mother Rita (Mayra Batalla) is furious when her daughter comes home wearing lipstick. It makes her more likely to be kidnapped. Halfway through her film, Huezo time jumps, and a more rebellious 13-year-old Ana is now played by Mayra Membreno. Both young actresses are remarkable, giving such natural, genuine turns that one has to remember that this is a fictional story. 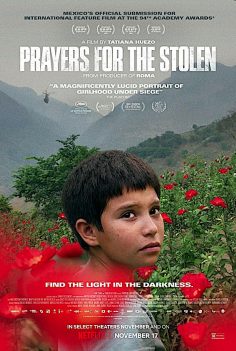 It helps that so many of the scenes feel captured in a pseudo-documentary style and not constructed, particularly in the first half when the young girls try to find joy in such a dangerous part of the world. In the second half, Ana becomes increasingly optimistic, especially when she meets a teacher who inspires her to believe that what is upside down can be turned right side up again. Ana’s fate almost turns Prayers for the Stolen into a thriller given how present the threat of violence is in her life.

Writer/director Tatiana Huezo is known for a number of films, especially Tempestad (2016), for which Huezo received the Silver Ariel Award for best direction. Tempestad is a story about the journeys of two women victimized by corruption and injustice in Mexico. Novelist Jennifer Clement has written a number of best-selling novels, including Gun Love, which is currently being filmed by director Julie Taymor. As President of PEN Mexico, Clement has spoken extensively about the safety of journalists in Mexico and was instrumental in raising the issue and changing the law so that the killing of a journalist became a federal crime. Prayers for the Stolen is a co-production between Mexico, Germany, Brazil, and Qatar, with distribution handled by The Match Factory. It is currently screening at several Laemmle Theatres in Los Angeles.