Los Angeles, CA (The Hollywood Times) 8/18/21 – On Wednesday, August 18, 9:45 pm at the Directors Guild of America on Sunset Boulevard is Wes Hurley’s brilliant Potato Dreams of America (95 min., 2021). This film is a marvelous send-up of his own story as a young gay man who grew up in the Soviet Union and left with his mother for a new and unpredictable life in America.  Potato’s story of growing up in Vladivostok on the eastern Pacific seaport during the waning days of the former Soviet Union, as glasnost was announced by Premier Gorbachev is actually Wes Hurley’s own boyhood experience, as he recalls it with flamboyant, melodramatic, and, at times, stylized camp. Of course, the film takes license with some aspects of his own story but it is a moving account of a boy whose caring mother believed in him and made decisions in her own life for the betterment of her son. Potato Dreams of America is an autobiographical coming-of-age dark comedy about a young closet Russian boy who eventually moves to Seattle with his single mother, who was a prison-doctor in Vladivostok and turned herself into a mail-order bride in order to get out of Russia and protect her son from what would be a brutal experience in the mandatory Russian military,

Born Vasili Naumenko in Vladivostok and enthralled by American movies of the ’80s, Wes Hurley moved to Seattle at 16 with his mother, came out not long after as a young gay man. Later Hurley became a filmmaker and in Potato Dreams of America he now recreates his whole story. While in Vladivostok, young Vasili (played by Hersh Power) lives in a cramped apartment with his mother Lena (Sera Barbieri) and his battle-axe grandma Tamara (Lea Delaria), who runs the local Soviet Police Museum. Being raised Russian Orthodox, religion is important – so young Potato follows the lead of some of his more open-minded Russian teachers and tells his mother, “Mom, I found Christ.” Here Jesus appears literally as the casual television-watching bearded guy who is played by Jonathan Bennett (from Mean Girls) and seems to move into the apartment as well. With glasnost, suddenly Vasili can pick an underground Channel 3 on the television and see American movies. “Our lives are like Russian movies, nothing good ever happens,” observes young Vasili (Hersh Powers). That is as may be; to us, at first glance, his life looks more like a U.S. sitcom. 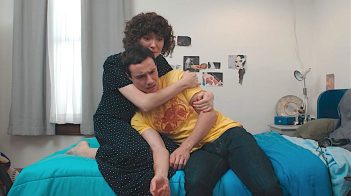 There’s a method to this disconnect, as Hurley eventually cleaves this feature into two distinct halves: a schticky, mordantly comic portrayal of Russian squalor, played out in a register that American audiences will find comfortingly familiar, and a study of immigrant life in the States that very suddenly morphs into a different film altogether. Gone are the stylized staging and heightened delivery of the Russian scenes, along with the actors playing Vasili and his mother. After answering a letter inviting Lena and her son Vasili to come to America, she packs up and moves to Seattle where she meets and marries a man named John (Dan Lauria) who seems to work for Microsoft. We encounter a new set of actors, speaking the Russian-accented English of nervous immigrants and they move into an American suburban community where Vasili begins to attend public school and his mother attempts to find a job in a Mexican restaurant. And then there is her new husband John, who seems quite rigid and eventually frighteningly right-wing in his views on liberals, homosexuality, abortion, women’s rights, and firearms. His religious rigidity will prove to be a big problem for both Vasili and his mother. 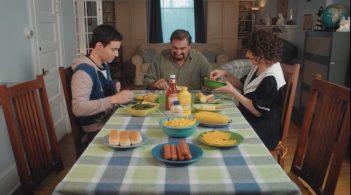 Back in Russia, Vasili discovered his own homosexual urges while watching a Jean-Claude van Demme movie but keeps them to himself. In the second half of the film, Lena is played by Marya Sea Kaminski and Vasili by Tyler Bocock respectively. Although Pretty Woman seems to be in their minds as an idealized outcome, the reality is much different. The American dream comes with complications. The film shifts to Vasili’s anxious coming-out process, where the heteronormative Hollywood films of his youthful fantasies are of little help. Instead, it is Gregg Araki’s overtly queer The Living End that serves as Vasili’s introduction to gay identity. There are some interesting developments in the rest of the story and, although those reflect what really did happen in the life of Wes Hurley, you must see the film to enjoy the discovery.

Potato Dreams of America emerged as a full-length feature after Wes Hurley previously adapted his upbringing into the 2017 documentary short Little Potato, which won top honors at that year’s SXSW festival and before adapting that in turn into the VR piece Potato Dreams. This feature-length expansion, once more granted a SXSW berth, picks up the heightened reenactments of Potato Dreams and crystallizes them into pure narrative form. The two shorts’ more experimental inclinations survive as remnants in the Russian sections, where the starchily layered compositions and cardboard fakery of Kristen Bonnalie’s production design lend a note of dark, expressionistic absurdism to Lena and Vasili’s misery in the first part of the film. Perhaps the second half in Seattle flags a bit with a more conventional “it gets better” arc, as Vasili attempts to assimilate into mainstream America and has to come to terms with his sexual orientation and identity.

Part of the fun in the film is when the fourth-wall comes down and we realize we are on a movie set and Wes Hurley (played by Tyler Bocock) is actually directing this film about his own life. He asks us, the audience, if “we are ready for a happy American ending.” As a local cult filmmaker, Wes Hurley’s work focuses on exploring gender identity and finding community in Seattle’s queer performance spaces. He has collaborated with theater, drag, and cabaret performers around Seattle to raise awareness about human rights violations in Russia.  He also created the comedy-horror soap opera web series Capitol Hill (2014) set in Seattle’s historic neighborhood.

Come and see for yourself at the screening of Potato Dreams of America on Wednesday, August 18, 9:45 pm at the Directors Guild of America on Sunset Boulevard. On the Red Carpet beginning at 9:15 prior to the film’s screening in DGA-1 on Wednesday cast members Lea DeLaria, Jonathan Bennett, Dan Lauria, Marya Sea Kaminski, Sera Barbieri, and Tyler Bocock will be in attendance. Virtual screening is available from 8/19 through 8/21. To purchase a ticket to the in-person screening or online streaming, go to: https://outfestla2021.com/potato-dreams-of-america/