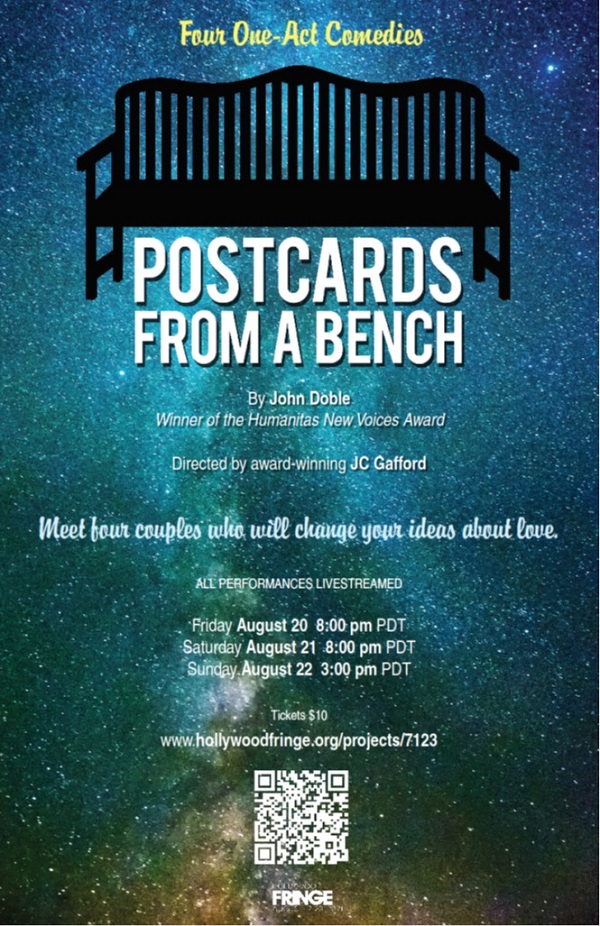 WHAT: Postcards from a Bench. A Hollywood Fringe Festival selection. A program of short comedies. A virtual show.

WHO: Written by John Doble. Produced and directed by JC Gafford. Presented by 11 West Productions.

ADMISSION: $10. This is a virtual show. Registrants will be provided a streaming link.

Meet four couples who will change your ideas about love, in this show comprised of four short comedies.

Nothing New Under the Sun. An attractive woman encounters a school teacher relaxing on a park bench. She gives him an ultimatum: Go with her or die! Cast: Harry Fakouras and Kaylena Mann.

Try Try Again. A couple talk about what the Renaissance, World War II and Donald Trump have in common. Would you believe one hellava lot?  Cast: Lexi Collins and Tucker Boggs.

Twilight Time. A comedy about suicide?? Strangers meet on a park bench with a common purpose—they’ve both decided to end it all. Spoiler alert: they don’t. Cast: Carlos Gomez and Bita Arefnia.

ESP. A couple with a mischievous dog communicates so well they can read each other’s minds? Really??  Cast: Alex Brown and Robert Kim.

JOHN DOBLE’s plays have been performed across the country and in the U.K. and include A Serious Person (Belper Prize), Tatyana and the Cable Man (Best Play, Midtown Festival, NYC), To Protect the Poets, Reunion Run, and The Mayor Who Would Be Sondheim. His first screenplay, THE AMEN SISTERHOOD, won the 2020 Humanitas New Voices Award. A collection of his fiction, Lefty and Other Stories, was published by Clemson University. He resides in New York City.

JC GAFFORD has been a director and theatre generalist since 1986, directing shows in New York (Provincetown Playhouse) and locally for Words Across Cultures, The Haunted Studios, The Eclectic Company Theatre, Lonny Chapman Group Repertory Theatre (most recently Tennessee Williams’ The Strangest Kind of Romance) and more. He received a Master’s degree from NYU and a BFA from Cal Arts and is an accomplished musician. He is also a high school drama department director and adjunct faculty member in the school of education at Brandman University.

As we revive and regenerate after a difficult seventeen months, Postcards from a Bench is exactly the kind of light-hearted entertainment we need right now.