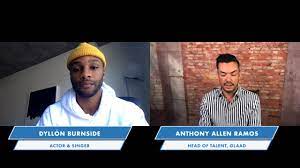 GLAAD’s Head of Talent, Anthony Allen Ramos talked with actor, producer and singer Dyllón Burnside about winning the Daytime Emmy Award for Outstanding Short Form Daytime Non Fiction Program for his PBS Series “Prideland.” The incredible series follows Burnside across the South as he connects with different LGBTQ people from all different backgrounds and is available to stream now. He also talks about the Primetime Emmy nominations for his series “Pose” and what it would mean to see his co-stars Michaela Jaé (Mj) Rodriguez and Billy Porter win. Burnside also talks about his episode of horror/thriller anthology series “American Horror Stories” which is available now on FX on HULU and talks about his latest single “Heaven” which is also out now. Lastly, the actor and activist speaks openly and honestly about his reaction rapper DaBaby’s recent remarks against LGBTQ people and people living with and affected by HIV/AIDS.

“It’s really frustrating.  A lot of that of what I see in that is fear, a lot of that of what I see is ignorance.  A lot of that of what I see is regurgitating what you have been taught or received from the outside world that you know nothing about.  It is very clear that he is uninformed.  People that have to make other people feel small in order to make themselves feel big, that tells us a lot about who they are.  I think the world at large sees the statements and sees him for who he is now.  I wasn’t actually shocked by it, I don’t listen to his music because I know that it is all rooted in these sort of heteronormative, toxic ideas….where do we draw the lines in terms of the people we are listening to and not just when it gets to the point where they make a statement like this.  There are many artists out there who feel this way or are ignorant in this way who make music in this way and they just have articulated themselves in this way and put themselves on blast.  I think that when we are ingesting music, art, content and it’s toxic in any way, that is indicative of the artist you are listening to.  That is where we have to start drawing the line and saying that this is toxic…the way that it bleeds over into all areas…(for example) the way that he (Da Baby) talks about women.  To the fans of Da Baby who are queer, who are HIV positive, I feel for you, I am sending my love to you and I hope you can reconcile your pain and the hurt you felt from his statements with your appreciation for his work.  I hope that we get really clear on who the artists are that we want to support and what the music is that we are listening to that we are letting into our ears, into our minds and into our hearts, and the frequencies and the energies that we are receiving.”